Interview with A Billion Lions 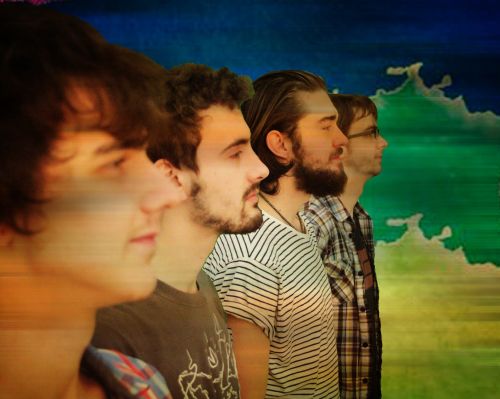 Joe Parr, with input from the rest of the band members, chats about their 2 recent singles, upcoming album, and energetic and catchy rock/punk sound.

Heya guys!  It’s been a big and crazy-busy couple of months for you all with the release of your ‘official’ debut song “Torquay”, a roaringly energetic and massively enthusiastic tune that blew me away when I first heard it.  Before we hash out the info about your music, can you pleeze go into who’s in A Billion Lions and what instruments you play?  I am assuming that there are less than a billion members in the band and that you’re not lions…Well, at least not literally…

Well, there are only four of us: Joe Parr on guitar and vocals, Philly Cheese on lead guitar and vocals, Ryan Olliver on bass and vocals, and Matt Nutter on drums. Joe and Phil tend the sing the most; I guess you could call them co-lead vocalists, and Ryan has lead vocals parts too every now and then.

When did you all actually get together as a band?  I’ve read that you formed A Billion Lions in 2013, but then I went to YouTube and saw videos of you performing live in 2012.

In describing the band’s sonic style, which of the following words hit closest to the mark or do they all apply: Indie-rock, punk, rock, alt-rock, and/or garage-rock?

Well, we never like to categorise ourselves into any one genre; we feel like it might pigeonhole us a little bit. We don’t want people who haven’t heard us before to have any pre-conceived notions of what we sound like, because they might give us less of a chance if whatever genre they’ve heard us be called is not one of their favourite genres. And on top of that, we don’t really have any idea what to call the music we play anyway. All four of us have pretty eclectic tastes when it comes to music, so I like to think of our sound being a melting pot of all our specific tastes. Besides, we sort of consider terms like ‘indie’ and ‘alternative’ to be fairly useless. I mean, if both Yuck and The Kooks can be categorised as ‘indie’, then it’s basically a non-term.

You just dropped your 2nd single, “Doomsday Babies” (with awesome artwork!) and an accompanying video.  Its chorus is tailor-made for the stage, with the audience swinging their drinks in the air and shouting “When the world is crashing down / we’re still standing!”  Has this been what’s happening at your gigs?

Haha, yeah, we get a fair amount of sing-alongs going. It’s mostly people who have seen us before, but sometimes we manage to get people who have no clue who we are singing their hearts out too, which is just one of the best feelings in the world.

All of this is leading up to the release of your debut album soon, but I’m a bit fuzzy on its details.  When do you expect to unleash your debut?  Is it going to be titled Let It Happen?  Is the cover art going to be a collage of lions’ heads on retro wrestlers’ bodies which I’ve seen online?

I can tell you that yes, it is called Let It Happen, the lion wrestlers are the front cover of it, and it will be released… sometime in September!

What made you choose End Of The Trail Records as the company to promo and distro your album?

Well, they offered us basically a non-contract contract, in a way, so we’re not actually contracted to them, but they’re going to put our stuff out anyway, which was perfect for us because we don’t really want to be tied down too much at this point. Their whole ethos is basically that they know they’re a tiny label and more of a stepping stone to bigger labels, which was just really refreshing to us in its honesty.

You’ll be playing The Great Escape Festival in Brighton on May 15th.  Have you ever performed at a music festival and one of this magnitude?

We did Tramlines last year, which was great. We’re super excited to be playing TGE; it’s going to be one of our biggest gigs yet probably. We also did something called Bramley Festival the other year, but that doesn’t count; it was practically just a small thing for old people and families. The stage was huge though, so it was pretty great! We went on after a Beach Boys cover band whose average age looked to be about 70. It was a fun day. We’ve played a couple of one-day festivals around Leeds too, but never anything as big as TGE.

Is there a thriving rock/punk scene in the Leeds/Bradford area where you’re located?  Do you all hang out together when you’re not doing band-related stuff?

There really is! I’m constantly surprised and pleased by some of the incredible bands we get to play with sometimes. Dancing Cake, Lion Thump, and Alverstone are some of our favourites. Alverstone just put out an EP that I cannot stop listening to. Yeah, we go to each other’s gigs, see each other at parties, run into each other in the street, and generally hang out. The great thing about Leeds is its size: it’s just the right size that you can have all these connections to people and their bands and not even realise, and then when you do realize, you make friends and network with people.

I’ve read that you have an “American influenced sound”.  I’m not exactly sure what this means, but are there specific American bands/artists that have influenced your sound or attitude?

We’re not exactly sure what it means either. I guess Phil sounds a bit American when he sings sometimes? But then again, so do tons of people. But I guess a lot of our main influences are American: Pavement, 90s pop-punk like Green Day, Red Hot Chili Peppers, etc…

“Torquay” is a pretty unusual song in that you have talking vocals for the first two verses and then that super-catchy and compelling exclaimed chorus.  How did you put this song together in the studio?

We had that song for a while and didn’t know what to do with the verses at all, vocal-wise. Joe was trying out loads of different melodies and nothing seemed to work until he just gave up and started talking instead, and as soon as he did we all knew that that had to be what the verses are. It just sort of clicked. He’d been listening to a lot of Dismemberment Plan around when we wrote that song, and they have a few songs with talking/talk-singing, so I guess you could credit them for the influence. Then again, we love loads of bands with songs with talking in them: Art Brut, Suicidal Tendencies, Pavement, etc…

Sorry to go on ‘n’ on about “Torquay” but I am sooo tuned in/turned on to/by your song!  Whenever I listen to it, it puts a big cheesy grin on my face.  What has the fan/audience response been to “Torquay”?  Are there any songs by other bands/artists that give you that type of thrilled reaction?

Haha, it’s all right, don’t worry. The audience response has been better than we could have ever hoped; people have been really, really loving it. Even lots of people that we know usually don’t listen to guitar-based music have been telling us how much they’ve enjoyed it. It always gets a cheer live when we begin it as well, which is nice. I guess you could call it a fan favourite now. I always get thrilled when I listen to music I love, to be honest, because music is the best thing ever. Right now I’m absolutely loving Alverstone’s (who I’ve mentioned already) new EP Couch Drunk, particularly the song “Bratislava”. Cannot wait to play with them on the 20th and sing along live.

At your SoundCloud site you’re offering a free download of another song of yours titled “Ha!”.  It’s very rhythm-centered and on a lot of your songs you interject ska-like breakdowns with staccato tempos and precise time changes.  Where does that influence come from and am I right in calling it ‘ska’ or is it some other musical style?

We have no idea where that influence comes from, but it might partly be ska, as we do like a lot of ska. However, I think “Ha!” is more influenced by Latin American rhythms, like what you find in samba music. We don’t limit our influences to English-speaking counties!

Going back to your debut album, will it include all the songs that you’ve posted online, including your ‘pre-official-release’ tunes like “Oh My Lover” and “I’m Free”?

Hahaha… no, it won’t. “Oh My Lover” and “I’m Free” are two songs that we wrote when we were still trying to find our own sound as a band. We don’t ever even play those two anymore; they don’t really represent us or our sound incredibly well. We actually tried to get them off the Internet the other day, but no one could remember our old YouTube password, so they’re up there for good now, hahaha. Consider it juvenilia.

How are the next few months shaping up for you?  Do you have other gigs lined up or any more videos to shoot?

Other than The Great Escape, we’re playing at Bad Apples in Leeds on the 20th of May with Yawning Dog, Alverstone, and Dancing Cake. We’re incredibly excited for that one, so everyone who can come should come! We’re in the process of sorting out some more gigs for over the summer, so we’ll be announcing some shortly. We may… have another video to put out… All will be revealed in due time.

Lastly, can you please list your official site(s) where we can find out more about you and your music?  And, actually, do you have a main official site, because I haven’t seen one online so far.

We don’t have an official site as of yet (Working on it!) so we mostly just use our Facebook and Twitter as our main sites. There’s Soundcloud too.

Flash Music Reviews for May 2015