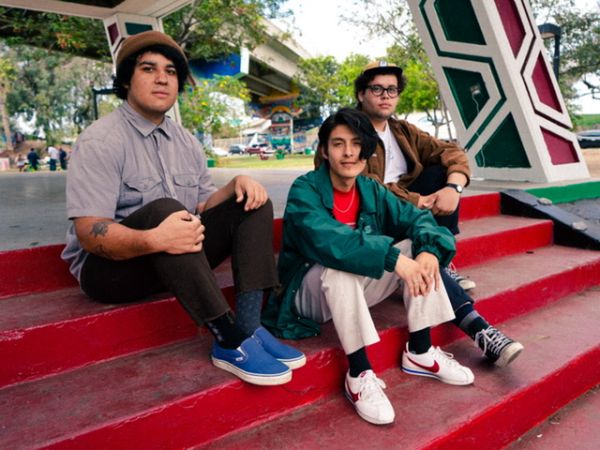 San Diego, CA garage-punk band Beach Goons are set to break out in a big way with their latest, and long-awaited, album hoodratscumbags. The band has been banging out high-energy, catchy, but lo-fi-recorded tracks since 2015, including the much-loved BoiSad LP.

Beach Goons tighten up their tunes and sharpen their production for the sonically potent and lyrically engrossing hoodratscumbags. Pablo Cervantez, vocalist, guitarist, and the only original member of the band, kindly took the time to address the importance of the LP, his musical journey and outlook, and upcoming touring schedule.

Heya Pablo!  So stoked to being doing this interview with you.  By my count, you’ll be releasing your third full-length record hoodratscumbags, on September 7th via GRNDVW. What are the vibes like at the moment?  On fire or chillin’?

You recently dropped the sonically staccato, vocally plaintive lead single “Hunny Bunnies” from the LP.  This is actually an older tune from your debut album Summer Bummer.  Did you re-record the song for hoodratscumbags and why did you decide to resurrect it?

Yeah, we recorded and added a few new things to it. We really didn’t have a reason other than we just loved playing it and it’s a lil something for the OG’s.

What has been the evolution of your music since you formed Beach Goons in 2014?

We’ve definitely matured and I think really getting our music to sound the way we genuinely want it to sound contributes to the change. I’ve noticed a sense of freedom in my writing after telling myself I wouldn’t focus on what band or album I wanna sound like.

What details can you spill about the new LP?  It definitely boasts a cleaner, sharper production sound than previous releases.  Who contributed to the recording process?

We had a few people contribute, but I’d personally wanna thank Brett Romnes for the mixing and mastering ‘cause he brought that shit to LIFE. We also had Sam, Roy Silverstein, and myself work on the tracking.

Pablo, you are the founder and sole original member of Beach Goons.  Who joined you for the recording of hoodratscumbags and who’s currently in the band?

I’ve been working on HRSB for about two years. We had Chris on drums, our old bassist did about 4 songs off the album before they left the band, and I did all the vocal, guitar, and remaining bass tracks for the songs that needed them. I also played every instrument on “Chunti” (tracked 90% of it at home). Currently, it’s Chris Moran on the drums, myself as vocalist and guitarist, and David Orozco on bass.

You have Mexican roots and live in California.  Your enthusiastic, tuneful music bridges the cultural divide, where you sing in English and sometimes in Spanish, and at other times both languages in the same song.  “Chunti” is sung entirely in Spanish.  What are the lyrics about?

We love taking pride in our Mexican roots. It’s who I am on the inside and out. It’s what I want people to understand when they see us or listen to us. We’re proud and loud and the homies should be too. “Chunti” is a definitely one of the most personal tracks on the record. It’s just about the things I was going through at the time personally, but the second verse is strictly about my mom and dad. They both immigrated here, my dad being from Guerrero and my mom from Jalisco; I’m a first generation and I felt like reminding them that they didn’t go through it for nothing. I also referenced a song called “Casa’s de Carton” from 1973 by Los Guaraguao and that song holds high sentimental value to me and my dad.

You kick out the jams on the frenetically energetic “HSRB” (an acronym for the album title) that roils with amped-up punk tempos, indie rock guitar grit and shine, and sweet pop melodies.  The contrasting bleak lyrics describe the impoverished, tough life in the hood.  Would you say that is track is the most personal one on your album?

The song’s more about me just always worrying so much about what’s to come and how I feel about my future. I wrote it after hanging out with a few of my homies. All we did when we hung out was smoke, tag, skate, and get into shit just to get into shit. I think it touches more on the fact that I was so focused and worried about the things I shouldn’t have been worried about. The universe works on its own. Everything will work out on its own, so I shouldn’t worry so much.

Do you think there is any hope of breaking out of the hood?

Absolutely. I mean, Rafael Reyes made it out with Prayers and he’s from Sherman Heights, which is literally right down the block from me.

You started playing guitar and singing with your friends when you were a teenager growing up in San Diego’s Logan Heights section.  What was the reason for this?  Did you see it as a way out of the hood or was it just for fun and to pass the time?

I had a rock band, haha - That shit really pushed me to play a real guitar. I remember the first guitar I got was from Ross after I begged my mom to buy it for me. When I finally got it, all the friends I had at the time were kids I grew up with in the neighborhood or grew up with in school. The very first performance I ever had in my life was at my middle school, Memorial Middle in Logan. We got to play during lunch. We also had tons of shows at the Logan Heights Library ‘cause of the music programs they had there when I was growing up. I really appreciate what they did for the barrio and for us. The music program there constantly let us practice in their auditorium room, let us borrow gear that we couldn’t afford,  helped set up events for us to perform, and also put us on some small local festivals. They had drum kits, guitars, bass, amps… Anything and everything you needed, so shouts out to them.

I’ve said it before in recent interviews, but I’ll say it again – US President Trump (Ugh!  An oxymoron if I ever read one.) and extremist Republicans in office and their rabid supporters are decimating the great democracy of The United States of America through their evil actions and words. They are destroying lives by butchering/dismantling healthcare, environmental regulations, immigration policies, civil and human rights, and more. From the top down, lies, hate, and fear are being spread so that the ignorant and intolerant join their malevolent cause.  How do we rise up, resist, and fight this abominable scourge?

Honestly, none of this is new. Everything you just mentioned about civil/human rights, healthcare/environmental regulations, and immigration policies have been swayed to benefit the majority and to disadvantage minorities for as long as anyone can remember. It’s some serious terrible shit going down and it’s been going down way longer than we think. Like I said, the fool in office now ain’t nothing new. We’re all just finally tired of the same old shit and it’s so obvious. Everyone feels some type of way. It’s sad how terribly and poorly the government handles each and every one of these issues. People really, and I can’t stress this enough, underestimate the potential we have as a society if we all speak and think as one in favor for all.

On a more joyful note, you just played Beach Goth. How was that gig?

It was stupid tight! It was one of the first official festivals we’ve ever been on, so everything was super-new to us. We were backstage heading to our dressing room/stage while The Drums were on and that was way too hard to comprehend, haha.

And you’re kicking off a jam-packed US tour on August 15th that runs through the beginning of October! Is this the longest or widest tour you’ve done?  What necessities and/or frivolities will you be taking with you in the van?

This is actually our first tour ever! We’re excited to be on the road, and we’ll be bringing weed, portable chargers, headphones, and some pillows and blankets.