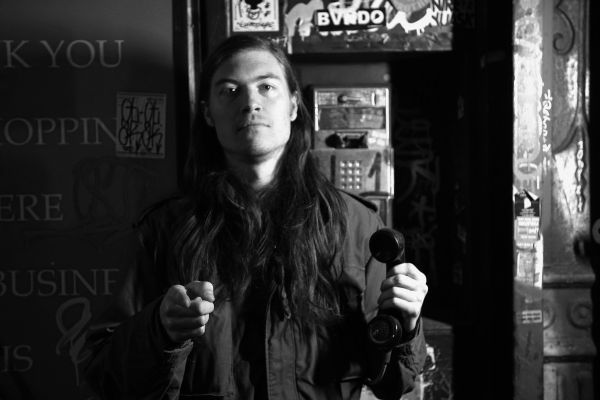 Prolific musician Matt C. White is not only part of three bands, but is also a solo artist who released his debut album, wallow in the hollow., this past April. The North Carolinian-raised multi-instrumental singer-songwriter, who is currently based in Brooklyn, has diversified his projects to include alt-folk/rock group Dead Seconds, heavy/psych-rock band Grandpa Jack (who just dropped their self-titled debut LP on August 10th), ambient music act Realizer, and a contributor to Charles Ellsworth and the Coo.

White’s solo album Wallow in the hollow. showcases his lively and engaging take on Deep South swamp-Americana and blues-rock. Rebel Noise is proud to host the premiere of a wild video for the high-spirited, acoustic guitar-pickin’, hand-clappin’, foot-tappin’ track “Oath”.

The song itself is upbeat, with a strutting pace, jaunty rhythms, and a cycling guitar refrain. The lyrics, however, cut to the quick as White exclaims robustly, but defiantly, “I leave you with this hex / the one that leaves you dyin’… slow.”  He’s been done wrong in the song, but it comes across as a sonic celebration.

The video for “Oath” is equally as vivid and mordant, focusing on a janitor named John who, as White puts it, is “down on his luck” and “lonely”.  John stirs up a special brew of conjuring hoodoo in the laundry room at work, places the mix in the washing machine, and presto!, gets two ‘rag doll’ girls climbing out of the washer.

These summoned-up girls are curious about humans and their surroundings, but are obsessed with their origins from the washing machine. They hand-paint the washer in red (and eventually build a makeshift copy off-camera), then disappear from John’s view.  He later finds them on the rooftop – with a bunch of other conjured up ‘rag dolls’ - and they take him into their circle, then hex and sacrifice him to their DIY washing machine.

As White explains, “It’s kinda like, the thing that brought them into the world is also the thing that takes him out. It’s a total ‘be careful what you wish for’ situation.”