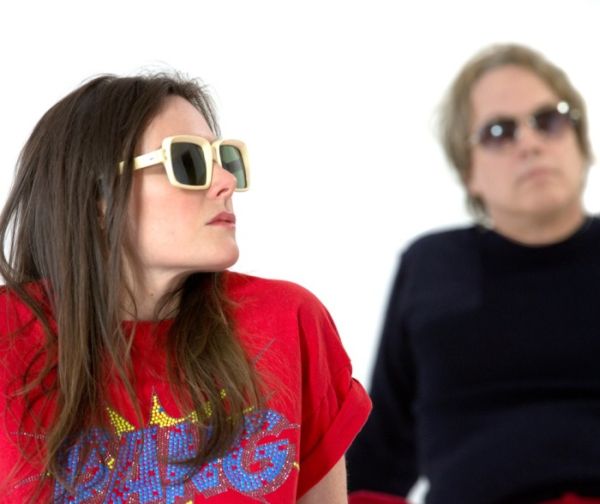 Greetings Guylaine and James!  This is an exciting and anticipatory time for you with the impending release of your latest album Uptime! on April 7th on Unsatisfied Records.  Has a record release party been planned or do you want to keep it low-key when the album drops?

James: We’ll be on tour when the record comes out, but I imagine we’ll do the usual thing, ritual animal sacrifice, drinking blood, etc… Then maybe when we get back we’ll go see a movie.

Guylaine: Release parties are too stressful. We’re doing an after-party in Brooklyn at Passenger Bar after our show at Baby’s All Right on March 28, so it’s like a pre-release party. We will play the record and have copies with us too. Everyone is welcome to join us.

You formed in 2012 as a duo and Uptime! is considered to be your 4th album.  What do you feel you’ve accomplished on this album that you hadn’t been able to do on your previous output?  Did you bring in new instruments, song structures, and/or sounds?

James: Actually, it’s our 3rd album (The Early Year was a compilation, so we don't really count that). On Uptime! we stripped away most of the new instruments, song structures and sounds we put on our double album Hilarious Heaven, and instead focused on making a coherent, fizzy-fireworks sounding thing.

Guylaine: Exactly. And I made a conscious decision not to use any keyboards, except on one song.

Several of the songs on Uptime! revel in incendiary rock guitar distortion and bathe in calmer, smoother, pop-oriented vocals.  Why did you pick this contrasting combination instead of sticking with one specific musical genre?

James: I guess what you’re describing is just what naturally comes out when we make songs. We didn’t consciously decide or not decide to stick to a particular genre. I’m still not entirely sure what to call our music. Other than rock.

Guylaine: I am still trying to get all the pop songs out of my system so I can make real music, but I think I am deluding myself because it’s the third album and pop songs are still coming out.

Can you shed some light on why you changed the band name from Détective to DTCV?

James: The original version of the name was a reference to a film by Jean-Luc Godard. We changed it because the Internet hates accent marks. And we didn’t want to be called just boring old "Detective" so we went with something a little more cryptic and confusing because of those reasons.

Guylaine: Also, there was a band in the 1970s called Detective and it made things even more confusing.

The force of Sonic Youth (ummm, sonically) and Debbie Harry (vocally) is strong throughout Uptime!  Guylaine, your vocals capture “Rapture”-era Debbie Harry, while the roaming and dive-bombing guitar lines suggest Sonic Youth.  What other artists have influenced your sound?  James, what singers do you admire that influenced your vocal delivery?  I’m hearing shades of Thurston More and a bit of Steve Kilbey or Nick Cave depending on the song.

James: I don’t like The Church but you’re the second person who’s made that comparison, so logic dictates it must be true. My natural singing voice is pretty deep, so I don’t really have a choice about who I sound like.

Guylaine: There isn’t really a singer that I admire in particular, other than Bjork, Aretha Franklin and maybe Yma Sumac for her range. Every voice is different and interesting. PJ Harvey has an amazing voice, but so does Kim Gordon, even though she doesn’t really sing in a conventional way. I do love Debbie Harry though, so I am down with that.  And Sonic Youth, of course. As far as other influences, that’s always a tough question. We’re not one of those bands that have a definite set of influences. I love Joni Mitchell and Black Sabbath, but does that come out in our songs? I don’t know.

Speaking of vocals, lead single “X Water” is a tour de force for you, Guylaine, and you run through a gamut of emotions and intonations on this track.  Where did this spring from?  Is your range of vocal expression a reflection of the lyrics, or of the instruments?

Guylaine: Well thanks, the melody came naturally to me, I wasn’t trying to accomplish any vocal feat. I did notice on the last album that I wasn’t really using my higher range on our songs and the classic rock radio where we live often plays Heart, so I think that might be where it comes from.  It’s actually a song about the Internet. I guess I get emotional and angry when I think of the Internet.

You both live in Joshua Tree, CA, even though the gritty guitars and propulsive drumming have a city vibe to them.  What is the draw for residing in Joshua Tree and not a big city?  Where did you record Uptime! and did the environs at recording time affect your tunes?

James: We moved to the desert because it’s quiet and cheap and beautiful. Not necessarily in that order. We’ve both lived all over the place. I lived in NYC for several years. I don’t know that our environment has any particular influence on our songs.

Guylaine: We recorded the album in L.A., which is more urban and gritty than it seems. The desert is so silent and peaceful that it would feel inconsiderate to play loud music here.

I had read that Guylaine plays a majority of the instruments on the album, from guitar to bass to keyboards.  But I have a feeling that James also represents on guitar and other instruments.  How do you split who plays what instrument and when?

James: Usually whoever writes the song sings and decides how it should be arranged. I play guitar on most of the songs, but Guylaine also plays guitar on her songs. And sometimes on my songs. I don’t play any other instruments on this record.

Guylaine: I am a control freak, but he does play most of the guitars.

Do you have a steady drummer now, or at least for your imminent U.S. tour this month and in April?  Who played drums on the album?

James: We don’t even have a steady drummer for this album. We used two drummers, Chris and Rory, or Drummy and Ringo, as we like to call them. Our friend BJ from the band HEALTH is playing drums with us on this tour, and we’ve added Guylaine’s friend Michelle who’s played in Spindrift and some other bands on bass, so that Guylaine can play guitar and keyboards. It’s an experiment. We’ve never toured as a four-piece before. Fingers crossed.

From what I’ve read, Uptime! is being released in limited fashion on red and blue vinyl by Unsatisfied Records and on cassette by Lolipop Records.  Does that mean it won’t be out at all in mp3 and/or CD formats?

James:  Our feeling is that these days people like physical artifacts. Cassettes have been making a comeback for a while now. VHS for the tour documentary is in addition to a digital download (free with album purchase!), and will be very limited. It’s something Lolipop Records wants to start doing, putting out VHS tapes, because the technology is cheap, as with cassettes, and a lot of kids like the way it looks and sounds. But Uptime! will be out on all formats, including every codec the Internet supports. The vinyl release isn’t really limited. And the colors are random, so you don’t know what you’re getting until you open it. Even we don’t know. It’s like Christmas every day.

Guylaine: It definitely won’t be out on CD though. CDs are a terrible product. Vinyl and cassette tapes last longer than CDs. I am not crazy about producing more plastic objects that pollute the planet but records and tapes are things you keep all your life or donate to other people so they don’t usually end up in landfills.

You’re known for your electric live performances that veer on the chaotic and you’ll be at SXSW for the 3rd time soon.  What can the audience expect from your shows?

Guylaine: Hopefully my keyboard won’t fall off the stand.

Guylaine, you are from France, and James, you are American.  How does this French-American dynamic work for your both?  Do you ever get into any musical misunderstandings?

James: I can’t remember any musical misunderstandings. Guylaine grew up listening to different music than I did, but that’s more because I’m older than her and less because she’s French.

Guylaine: I am not as French as most French people, I think. And Jim’s not as American as most Americans.

Speaking of nationalities, Guylaine, you grew up in the French Alps.  Why did you leave that region?  I’ve visited The Alps and from my viewpoint, I’d want to retire there someday!  I guess the grass is always greener elsewhere…

Guylaine: It’s gorgeous, although it has been desecrated by years of industry and tourism. But yes, I have a visceral attachment to those mountains. Everyone has a natural habitat and I am definitely a mountain creature. But I also have the wanderlust gene, which is why I love touring. I will go back and live happily off the grid as a mountain hermit one day. For now, I am a desert hermit.

James, you have a long and storied career as a novelist, screenwriter, and music critic, and were in Guided By Voices for a time.  Are all these jobs ongoing or did you have to go on hiatus from them in order to concentrate on DTCV?

James: Everything is happening, always, at the same time. Drives me nuts some days.

The song “California Girl” comes a bit from leftfield on Uptime! due to its 70s-style acoustic guitar balladry.  James, are the lyrics like “…I’ll cook for you baby / and I’ll stop doing so many drugs” autobiographical or are you taking on a persona?

James: Little bit of both. I don’t do drugs, let’s put it that way.

You provided the dreamy and driving song “Mouchette” for the soundtrack for Christophe Honoré’s film Métamorphoses.  How did that come about and is it available on any other recording?  What is your favorite Christophe Honoré film?  I’m vexed by Beloved, extremely challenged by Ma Mère, and possibly like Love Songs best if only for its ending…

Guylaine:  Christophe Honoré chose the song from a Burger Records compilation. "Mouchette" was on the album Burger put out on cassette, called However Strange. I have to admit, it does mean a lot to us to have a song in one of his films. There aren’t too many interesting directors in France these days, but he’s one of them. My favorite film of his has an impossibly long title in French. It is called, Non, ma fille tu n’iras pas danser and Making Plans for Lena in English. Also, I am impressed you’ve seen so many of his films!