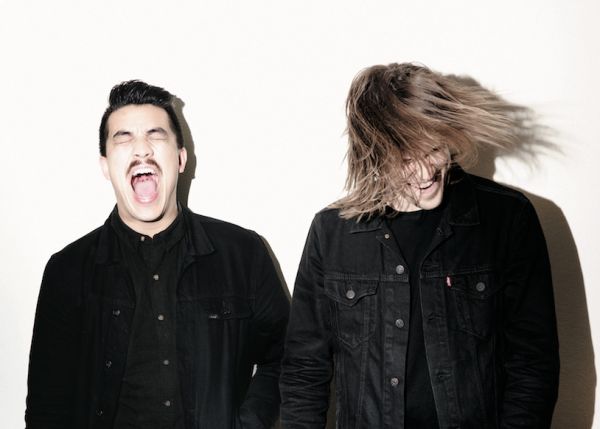 Australian rock ‘n’ roll/punk band Polish Club may not be a familiar name outside of the Land Down Under and New Zealand, but all that’s changing now.  David Novak (vocals, guitars) and John-Henry Pajak (drums) are currently on tour in the US for the first time and are set to break big with dynamic and enthusiastic debut album Alright Already.  The pair put on an electrifying live show and pretty much convert everyone they touch with their brash and thrilling, garage rock ‘n’ roll/retro-soul music.

David took some time out of the band’s busy schedule in the US to answer several questions about how he and John-Henry plan to conquer America – and the rest of the world.  So read on to find out what to expect from this exciting and exhilarating band.

Heya David!  So good to connect with you and find out the latest news about your rock ‘n’ roll/punk band Polish Club.  I’ve just discovered your music and it knocks my socks off (pardon the throwback expression)!  You’re a hit in your homeland of Australia, but are only now breaking out in the US due to distribution entanglements, which we’ll get into later on.  For starters, what’s the vibe like for you and bandmate John-Henry now, and what is your plan to conquer America (and the rest of the world)?

Sorry about the socks! All we want to do is get our music out across the world and play as many shows in as many places as we can. It's a long slog, but the first step is getting our debut album out here in America and then hopefully get over to Europe, etc…

You recently released the double A-side single “Beeping” and “Able” for the American and international audience.  Why did you select these two tracks for the single and not others from your repertoire?

They are two of the first songs we ever wrote and still are a good introduction and summation of our vibe up until now. Our manager has a super-annoying marketing spiel about how "this band converts on first listen", but there is a hint of that with these two songs. You get what it is almost immediately and hopefully you're in.

You also just premiered the video for dynamic track “Beeping” at mxdwn.  Will you be unveiling a video for “Able” as well?

Yeah we've got a video for “Able” coming up. There are lots of close-ups of crazy-eyes and mouths, so if that's your thing, you're in for a treat.

You unleashed your debut album, the ARIA Award-nominated Alright Already, in Australia last year.  How intense was the ride for you after it came out?  I’m assuming you were confronted with a frenzy of fervent fans and fabulous feedback from music writers.

People often talk about the death of the album for artists, but it's still a pretty legitimizing thing. We got a lot of radio and media love after the release of the LP and it kind of kicked everything up a level for us. Our shows tripled in size and that was when we started to really see the super-fans come out of the woodwork.

So the plan is to release Alright Already in the US and internationally as well?

Absolutely, that was and is our main goal for overseas right now. We've been sitting on this album for ages and we are dying to get it out to everyone, everywhere. So that will be coming up real soon in the US and elsewhere. Then, once everyone's caught up, we can work on the next one.

I’m not sure if you want to go into the details, but why has distribution of this album been held up for so long outside of Australia?

There's so much that goes into getting your music out overseas and you really need a team of people working it in each territory, which we didn't have in the past. After a false start and some roadblocks, we've finally sorted out how we're going to get it out and it's a giant weight off our shoulders.

Will you also be dropping your Okie Dokie EP, or is that meant for Australia and New Zealand only – and, hmmm, is the vinyl format really mustard flavored?

Honestly, we don't know, right? On one hand it'd be great to just drop it for everyone, but we also want to get the second album out as soon as possible for everyone. So it's a question of making sure everyone can get all our music, while also making sure everyone's getting the new stuff at the same time. The songs will come out at some point, I'm sure. We've done vinyl in a bunch of colors, because why not? Our LP went out in Australia in red and white (Polish colors and/or Pokemon colors), our first EP is coming out in Australia in pink (deli meat color, if you will), and Okie Dokie was mustard. I'm not sure why mustard, but it seemed to work with the artwork.

Based on the songs I’ve heard, you bring a brash, dynamic, and exuberant energy to your music – on record and in the live setting.  Do you ever slow down and go into ballad or lament mode on a tune?

We've got a bunch of slower jams, including one which will be coming out as a single in the US eventually. We've started with a couple of fast and hard tracks because they are more to the point, but the album has a nice balance of slows and fasts. I think the fast ones are the ones that get your attention and the slower, heart-wrenchers are the ones that keep you coming back. But to be clear, even on the slow jams, my voice is still brutally loud.

You’ll be playing some shows in the US this month.  Have you played in the country before?  What can the audience expect from your gigs?

We've never played anywhere outside of Aus/NZ before, so this is massive for us. We're hitting NYC, Vegas, and LA this month. It's going to be super-fun for us because we're probably at our best when trying to win over new people. We like the challenge of having to win someone's attention and make sure they're paying attention. It'll be quick, but we're going to concentrate about 3 years of work into one 45 or so minute set. Can't wait!

Will you stay based in Sydney, Australia or are you planning to ‘go Hollywood’ and cut a record in LA?

I'll do whatever if it means we can make more music and expand our careers. We're not precious about where we need to take ourselves in order to bring Polish Club to the next level... whatever the hell that is!

What is your idea of a fun day and/or night out?

Well, we're in NYC right now and it seems like almost anything we do here would be a fun day, and especially night out. Though honestly if you plonk us in front of a sandwich, beer, and Playstation, we're good.

Lastly, what would your dream bill be like, with you headlining and with three spots available for the supporting acts/artists?

Song Premiere: “Give In” by New Language