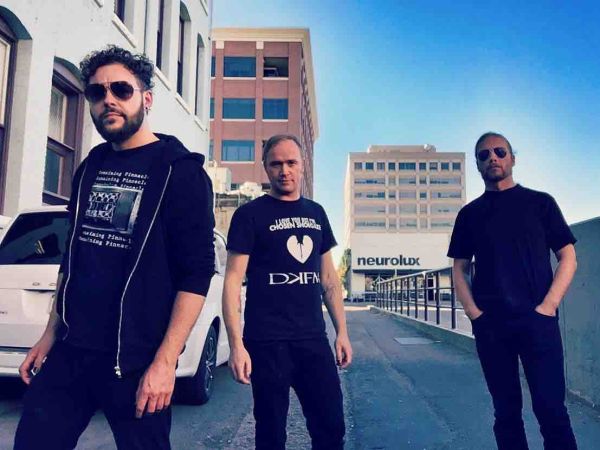 Heya guys!  It’s so great to be in touch with you about your compelling and melodic post-punk/ dark New Wave music.  You just wrapped up a Canadian tour this April and are starting a short European tour in May, which kicks off in your native Denmark and then travels to Germany.  What have the Canadian shows been like?

Hi there Jen! Thanks for reaching out!

We just played our first Canadian tour; 10 days in Ontario and Quebec. We do realize there’s a lot more to Canada than those provinces, but we’re only getting started. The tour was set up around our two showcases at Canadian Music Week in Toronto and everything went really well. In fact, it went so well that we just signed with Toronto-based Möbius Artist MGMT after our two CMW showcases. Jennifer from Möbius even set up a last-minute third Toronto show for us in order to bring more people out to see us. It’s been a little over two weeks working together and she has already done some amazing things. This also means that we will be coming back to Canada, as well as the USA, for more tours.

So far, the ten Canadian shows in April have been us getting to know the Canadian people a little better and seeing a bit more of the country. It’s been a pleasure and we can’t wait to come back!

You recently contributed your track “Skyline/Decay” to the shoegaze/alternative music compilation album Alternative (F)Acts.  The comp benefits #RESIST causes like civil and human rights and women’s health with all proceeds going to the American Civil Liberties Union and Planned Parenthood.  How did you end up on this worthy compilation?

We are good friends with Cory Osborne and his band Lightfoils from Chicago. Cory first came up with the idea for the compilation and asked if we wanted to join and contribute with a song and of course we said yes. Everything that is humane and makes sense to normal-thinking people is currently under threat and being removed by the new insecure, psychopath leader of the United States and his gang of thugs. We believe they must be stopped, so anything we can do to prevent them or slow them down in their doings, we will do.

Your latest the Cure-like single, “She Is Lost”, comes hot on the heels of “Skyline/Decay” and is the first song off your upcoming album.  How is the untitled-for-now album shaping up?  Are there any details you can spill about it yet?

We are currently both writing and recording new songs for our next full-length. It is coming along really well and has brought us back to a sound and songwriting somewhat the likes of our New Frontiers album, but probably a little punchier. We actually set out to continue in the vein of the very post-punk, upbeat, and aggressive songs on The American Dream (“Skyline/Decay” being the exception), but what came out was a bit different and involved a lot of electronics along with massive guitars. You can hear the drum sound on “She is Lost”. The result is pretty dynamic so far and we’re very satisfied with the direction.

You delivered The American Dream EP in 2015 and album New Frontiers in 2014.  Technically speaking, how has your sound evolved from that point to your forthcoming album?

With the new album, we have again kept production and mixing in our own hands and are recording in our practice space, but this time with the help of very skilled friends and their equipment. Bo Karlsson has engineered the drum and guitar recordings and, like all our previous albums except Offshore, Chris Cline has done one hell of a job mastering. Again, the sound “She is Lost” has tells me we’re on the right track, even though some of the other songs, currently being mixed, are either more aggressive or more droning.

You’ve toured all over the US and are attracted by the promise (or at least hope) of the American Dream.  What is it about America that fascinates you (Well, at least before Trump became President)?

Well, I would say we knew what the odds were when entering the US music scene. Like American society, the music business is comprised of very few artists at the top making money and the long tail of artists making a lot less. So far, we are part of the long tail, but that doesn’t prevent us from making new music and going on tours.

As a musician, you have to ask yourself whether you like to make money or you like to play music. The odds are you will play music and struggle with your day job employer and personal economy for quite a while before anything will happen. If you like making money, quit the band and go to the office and work 9 to 5. If you truly like to play music, go create and then go into the world and meet people.

This is our drive. To meet the many good folks out there. And we constantly meet them – fans, bands, bookers, bartenders, people at gas stations or on the street asking “So, are you guys in a band?”. It won’t make us rich (yet!), but this is what makes us happy and gives us a purpose in life. Whether in the United States or in Germany, good people make it all worth it.

With regards to America, pretty much everyone we know resents the current administration, but our decision not to tour the US in 2017 relies more on the fact that our work visas ran out and we can’t afford to pay the $3000 for new ones right now, than the fact that America is disintegrating and sliding closer and closer to becoming a dictatorship. Sad.

The grass is always greener, as they say, so for me, moving to Denmark sounds cool.   What you can recommend about the country that can’t be found in the US?

One word: Safety. Americans are scared; Danes are not. But you could move to Canada, Germany, or Sweden too. America is a country living in fear and desperation, thus buying guns and robbing and killing each other. Denmark has crime and people get killed, but nowhere near the numbers we see in the US. One of the reasons is that our system works. Our taxes are well spent by the system and the general cost of living is still lower here despite the nationwide 25% sales tax and a relatively high income tax.

Other than that, Copenhagen is a beautiful old city and other Danish cities have some old castles and fortresses too.

You seem like cheerful guys on the whole, so where does the angst and restlessness come from on the lyrics of songs like “She Is Lost” and “Suburban Depression”?

Well, as you can tell from the interview so far, we are pretty concerned with where the world is going. And right now it looks like it is all going to hell. That said, we can’t let those in power take away our laughter, even though a dude like Trump probably wishes he could. The people I mentioned earlier, that we meet out there, are the people that make us cheerful and give us the belief that we do this for a reason: That we can spread laughter just like the people we meet can make us laugh (Cory Osborne from Lightfoils is definitely one of those people).

What bands/artists have inspired your sound and/or outlook?

The list is long and still growing. Many people refer to ‘80s bands when comparing us to others, and we do have a sound reminiscent of many ‘80s bands, but apart from The Cure, The Chameleons, and Billy Idol we pretty much only listen to newer, more or less unknown bands who we played with or we just came across because someone mentioned them to us. Three specific bands, The Raveonettes, A Place to Bury Strangers, and The Soft Moon, have all had a big impact on our sound. Other bands that inspire us are André Obin, New Canyons, PRGRM, Strvngers, Bootblacks, Drab Majesty, and Operators, to mention a few.

You’ve shared the bill with a Who’s Who of post-punk bands, from the aforementioned Raveonettes, A Place To Bury Strangers, andThe Soft Moon to Cold Cave.  Do you have any fun or crazy stories to tell about your interactions with those bands?

It is usually pretty easy-going when playing with other bands. Backstage is a chill-out area, so there are not too many stories to tell there. One guy though, Jason “Jay Space”, the now ex-drummer from A Place to Bury Strangers, first got us totally wasted on Jameson in both Copenhagen and Berlin. Then we met him at the now-closed Detroit Motor City on Manhattan’s Lower East Side, which was where everyone lost their mind – happy and drunk. Jason is the coolest party animal we have ever met!

We really don’t have much time to do anything when on tour. We play every day and usually have 5 – 14 hours of driving to do. A normal day would be us getting up just before noon or earlier depending on how close we are to the next venue. Drive, arrive, sound check, play, hang out with friends, fans and bands, sleep, and then do it all over again.

Occasionally we have some time to go explore. One really cool thing we did was go on the architectural boat ride in Chicago. Perfect way to see the city and learn a bit about the history and architecture. In Toronto we recently had the opportunity to stroll through the city and see a few more bars both during the day and the night, which was nice. We always appreciate having time to hang a little longer with the people we meet.

What’s next up for you music- or otherwise?  How is the fan video project going for “She Is Lost”?  It’s such a cool idea!

We were in fact a little nervous about the whole thing, first of all because we didn’t know if anyone was gonna sign up at all, and second because all the videos could be of too poor quality to publish. But we have a couple of people out there working on some interesting stuff. That said, we hope to hear from even more people who would like to make a fan video.

The concept is pretty simple.  Here’s our pitch: The video has to be in black & white and should in some way have a story that relates to the lyrics and the general mood of “She is Lost”. Oh, and we like it gloomy and sad. If you can’t think of a happy ending, then just go with a sad ending.  We can send you some footage of us playing the song in a dark basement, but you don’t have to use it. Feel free to hit us up for any questions or anything really – info@theforeignresort.com or message us at our Facebook page.

Video crowdsourcing for "She is Lost":

Single "She Is Lost":