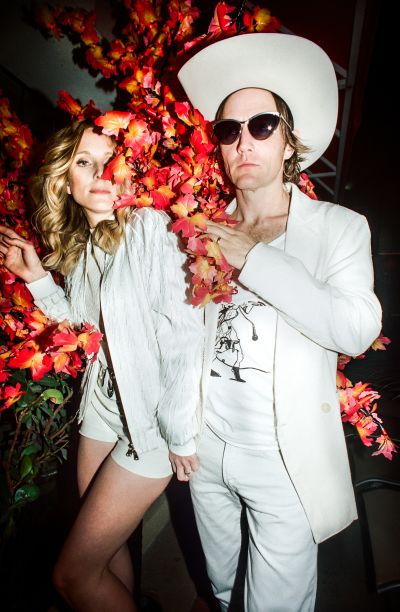 Hello Luke! It’s so exciting to have this chance to touch base with you. You and Melissa have spent much of this year touring the northeast US and Canada. How did all that go? Are you road warriors or couch potatoes by nature?

We are road warriors by nature, I suppose. The anxieties of day-to-day life lift when we head out on the road. Things are spotty at the moment, so there’s not much consistency yet, but now that the main tour has started this month, we’ll find a rhythm.

Your 4th full-length studio album, Panther In The Dollhouse, was unleashed on July 7th via Six Shooter Records. Can you reveal some details about the LP – like specific themes, new instrumental or recording techniques, and/or the musical styles you’ve outfitted yourselves in this time around?

We listened to a lot of ‘90s trip-hop (Portishead, Gorillaz), Brit Pop (Supergrass, Blur, The La’s, The Smiths, Beatles/Stones {duh}), Beck, and ‘50s American blues… Not that all of these things go together… but that’s what we were listening to last year. Also Sloan. And Andy Shauff.

But the lyrical themes are about class and sex, often. Who does it and why? How do race, gender, and money factor? What about age? We have songs about prostitutes masquerading as superheroes. The songs are mostly fictional. This is not a solipsistic record. W are not the protagonists.

Have you been playing a lot of the tunes off the latest album at your shows? If so, what has the audience reaction been like?

We’ve been playing a bunch of new songs. People seem to like them. There’s always a palpable sense of excitement when you play new songs. Maybe it’s just because you are more invested. Maybe your eyes are wider. Maybe you play better guitar licks. Not sure.

From what I understand, Panther In The Dollhouse is a departure from your previous output, at least in how it was written. Like you mentioned, instead of mining your personal lives, you channel other personas, like playing characters in a film. Would that be an accurate description of the album’s concept?

Each of your records has stood out stylistically from the other, as you genre-jump from folk to rock ‘n’ roll, and then Americana and blues, and now the story-telling, cinematic genre, if that’s the correct term for it. Where does this desire to try out different styles come from?

We get bored - of ourselves and of what we hear in the world. There are so many things to be explored, musically, and only so much time. We’ll be dead in 60 years!

For Panther In The Dollhouse you collaborated with hip-hop and R&B producers/musicians LIKEMINDS. What did they add to the mix?

You also continued your musical association with Gus Van Go and Werner F. What did they bring to the table for the recording process?

They push us to write better songs - or at least less meandering ones. Once we have songs that we all agree are where they need to be, we just throw stuff against the wall until we have something exciting, sad, visceral - whatever we’d like to inspire.

In 2012 you won at the Hamilton Music Awards for your album The Fate of the World Depends on This Kiss and in 2016 you won a JUNO Award for your album Leave No Bridge Unburned, and also performed during the broadcast. Has your rise in the Canadian music industry been a smooth ride or have there been bumps along the way?

We’ve ascended slowly, at the same time as the industry has plummeted (at least commercially). We don’t feel it so much. We just keep doing what we do.

This year is shaping up to be another exciting one for you, with your new album, as well as your performance at the Canadian Songwriters Hall of Fame induction that happened in September. What was your immediate reaction when you got word that you’d been selected to play alongside greats like k.d. lang, Buffy Sainte-Marie, Daniel Lavoie, and Arkells for this ceremony that honors Neil Young, Bruce Cockburn, and other artists?

These are heroes of ours. We were (are) thrilled.

Are you still based in Hamilton, Ontario? What draws you to this city?

We wanted to buy a house and we were too poor to do so in Toronto. Plus, Melissa was raised in Burlington, Ontario, which is just outside of Hamilton. Hamilton is a cool place. People are weird and talented and funny. I love it there. We live in Toronto now.

The world seems to have gone to hell in the past year or so with the rise of a restrictive authoritarian dictatorship ruled by hate, fear, and ignorance in the US, with a similar situation happening in England. At the moment, the bastions of freedom, equality, and progress seem to be France and Canada, maybe. Do you agree that a sense of optimism and hope exists in your country, especially now in the face of the US and UK’s isolationism and regression?

People see Canada as a bastion of liberalism and hope. Maybe that’s a bit naive. We elected Rob Ford to govern Toronto, Canada’s fourth largest political jurisdiction. Our dreamboat PM just raised our defense budget by a huge margin while indigenous people in this country live in Third World conditions. We have a lot of work to do. We’re not as different from everyone else as we’d like to think.

Your EP Éphémère Sans Repère from 2014 contains French-language versions of some of your songs. Did you just change the lyrics or did you alter the instrumental arrangements as well? Do you both speak French fluently?

We just reinterpreted the lyrics, with the help of Pierre Marchand. We could not have done it without him. He basically rewrote many of the songs with the original spirit intact. We both speak French. Fluently? Not so sure...

Which artists/bands have inspired your musical outlook?

The list is in the hundreds. These days I like Andy Shauff. Melissa has been listening to all kinds of cool stuff. I can’t remember what.