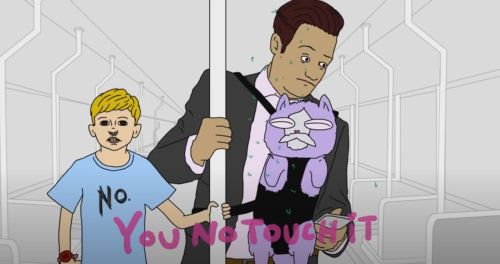 Punk rock veteran Gina Volpe of Lunachicks fame gets enthusiastically aggressive on her new wildy in-yer-face cat-tastic animated PSA/music video for the topical track “Don’t Touch Your Face.” You will be entertained, and you will also become ingrained to the fact that these days it pays in spades to not touch your face!

Official news: Volpe states, “As we're locked down in our houses I found one way to keep myself occupied and amused (other than stress eating my way through this nightmare). I wrote a little song/PSA that I then had animated by the amazing Leah Shore and wanted to share it with you.”

Official news: Blacksugar reveals, “Starting on March 16th, I went on social media each day and asked my followers/friends for a key, tempo, and title, and, armed with those crowd-sourced suggestions, I'd write and record an instrumental guitar piece by the end of the day. I pledged to post the album online two weeks later, after I'd accumulated 13 tracks." He didn't stop there. Realizing that ALL musicians are stuck at home self-isolating during this pandemic, he asked a few talented friends to contribute to the album…

Oakland-located dark, but melodic post-punk band Ötzi will released their second album, Storm, on May 22nd via Artoffact Records. Inspired by the attitude of old-school punk rock, the tunefulness of ‘80s New Wave, and the brooding allure of bands like Siouxsie and the Banshees and The Cure, the act mesmerize on “Moths” and cauterizes on galvanizing “Ballad of Oiwa.”

Official news: “Bassist/vocalist Akiko Sampson says, “We ascribe punk and feminist ethics to how we navigate the world, and that's something that will never change... The 'darkness' found in our music isn't existential dread or moroseness; it's driven by socio-political realities that have affected us our whole lives.””

Canadian powerhouse Bif Naked is a veteran of the punk rock music scene and she’s gearing up to release her upcoming studio album Champion. Before the LP drops she’s released the lead single “Jim” with its accompanying video.

While Bif Naked may be a big shot musically, she’s also a humble humanitarian, acclaimed writer, and cancer survivor. She channels her experiences into her work, including on the lyrics for “Jim,” which is a song about facing loss and tackling challenges head-on

Official news: “An unforgettable woman, performer, and activist, Bif Naked, for the entirety of her unbelievable career, has documented her journey in a deeply personal way - covering topics that allow her truths to be a source of empowerment and in alliance with her dedicated fans.

When asked about her famous optimism, Bif shares that she believes in everyone's ability to move forward, taking care of each other, and getting stronger together. “I believe in the goodness of people.  I am grateful for each person I have ever met, from the guru in the street, to the dude in the mosh pit, to the patients I meet in the cancer wards. Everyone is my teacher.”

Da Costa relates, “The purpose of this EP is to musically describe the polarity we all have inside of us: good vs bad, angel vs devil, ego vs essence of the soul. The songs of the EP describe different moments of that inner confusion giving us sometimes that feeling that we are in a "Maze", with no way out of our thoughts.”

Official news: “Ptolemea's music is informed by both the heavy, emotive vocals of Layne Staley-era Alice in Chains and the doom blues-rock of Black Sabbath and their kin. Ptolemea have established themselves as a vocally excellent live act with a melancholic, dreamy twist.”

French dark post-punk band Versari will soon be releasing their third album Sous La Peau (Under The Skin) via T-Rec and Declared Goods. Ahead of its arrival, the outfit has unveiled the rhythmically pressing “Des Images” single and video, which was directed by Renaud de Foville.

Official news: “Their music draws from “Chanson” (French songwriting) to post-punk, [and] noise to post-hardcore. [Their] third album, affirms, with strength and power, a new skin after shedding: an exorcism, a rebirth.  A powerful and provocative album w Incendiary lyrics: Jean-Charles Versari sings stories of purifying pyres: burning lies and false pretenses.”