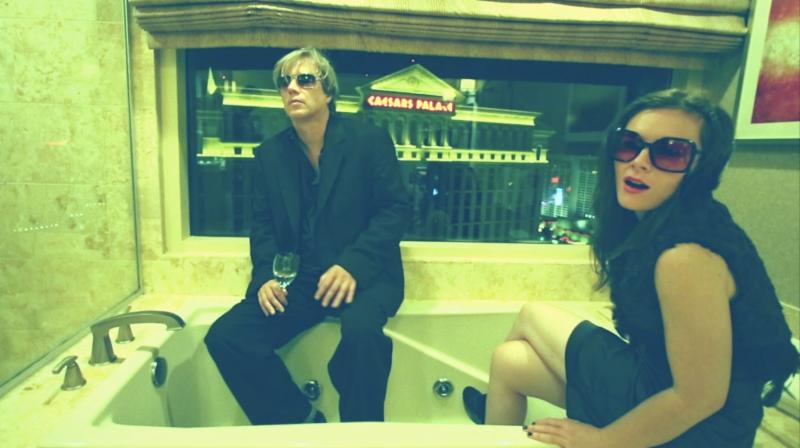 The third pop-rock-oriented full-length from indie rock duo DTCV is slated for release in April.

Where to begin with these guys? Possibly the most exciting live act going - equal parts The Who, Sonic Youth, Yeah Yeah Yeahs, and a bunch of other groups who are great live - DTCV has found it difficult to distill the chaos of their stage show into a coherent studio recording. Until now.

In the wake of their cinemascope epic Hilarious Heaven (the double-vinyl package of which is due to be released - finally! - by Dead Meadow's Xemu Records sometime in April), it's only natural that the Joshua Tree-based duo - pronounced Detective, for inscrutable reasons - would attempt something more focused than that sprawling, prog-punk marathon for their follow-up.

The third full-length LP in the band's brief existence (not including EPs, singles, compilations, and karaoke parties), Uptime! finds the French-American post-whatever combo sharpening their claws on a relentless sequence of concise, hook-laden, buzzsaw-guitar-drenched power pop songs that owe as much to Debbie Harry as to Wire (it's no accident that DTCV covered Blondie's "In the Sun" on a recent 7").

Frontperson Guylaine Vivarat (AKA Vivarock), who writes and sings and plays guitar and bass and keyboards on the majority of the band's songs, is a native of a small village in the French alps, which is sort of like being a native of a small village in Colorado, except French. Having traded the redneck paradise of her hometown for the cultural inferno of the West Coast (after a brief stop at the
Sorbonne to complete an advanced degree in international politics), she brings a uniquely continental and neo-anarchist perspective to DTCV's primary-color noise. On "Miley Cyrus Wins the Race," for example, she takes familiar 60s girl-group tropes and twists them into something altogether darker and more cathartic, alternately celebrating/damning past demons in the name of rebellious post-teens everywhere.

Guitarist James Greer (AKA Fiat Lux) adds his own mostly lit-and-cinema inspired influences - he's published two novels and written movies for Lindsay Lohan, Jackie Chan, Benicio del Toro, and Steven Soderbergh, to drop a ripe bunch of heavy grapes in your lap - to his coupla-three contributions, e.g. the Nabokov-and-Cronenberg referencing "Invitation to a Beheading," at the end of which he pits himself against himself in a two-minute shredding contest. Just, you know, because. A battery of drummers (this is a better joke in French) rounds out the Uptime! sound, but if you don't get it by now, friends, odds are you never will, and that would be a shame. Any band that includes a Sabbath-heavy anthem called "Rock and Roll Hall of Fame Induction Song" on the same record as an
acoustic ballad with choir called "California Girl" (wherein "Hope I don't fuck everything up" is the salient lyric) and makes it work has just changed music forever. Or something like that. Wake up and smell the biochemicals.