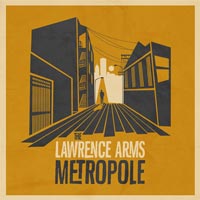 Chicago's own The Lawrence Arms will release Metropole, their first album in eight years, on January 28, 2014 via Epitaph. A beloved band in the punk scene from their inception in 1999, members Brendan Kelly (vocals/bassist), Chris McCaughan (vocals/guitar), and Neil Hennessey (drummer) have released five studio albums to date. Their sixth album and first with Epitaph, Metropole captures “that alone-in-a-crowd, stranger-in-a-strange-land kind of shit” according to Kelly. Metropole was recorded at Chicago's Atlas Studios with coproducer Matt Allison, who has also worked with Chicago-punkscene veterans Alkaline Trio. The follow-up to their 2009 Fat Wreck Chords EP Buttsweat and Tears, the new venture takes apart the band's gritty punk rock and fiery spirit, to reveal a new passion for storytelling-through-songwriting. Take the bravely personal lyrics of "You Are Here" where McCaughan ironically sings "Days just keep rolling on / They won’t miss me when I’m gone / I’m the chorus to that lonely street / Just footsteps fading to a dying beat.” After a long hiatus, dedicated fans have missed The Lawrence Arms and are ready for the band's most dynamic album to date.

New Tune “Void You Out” Premiers from OFF!