Political/Social/Economic Change Starts With You 5 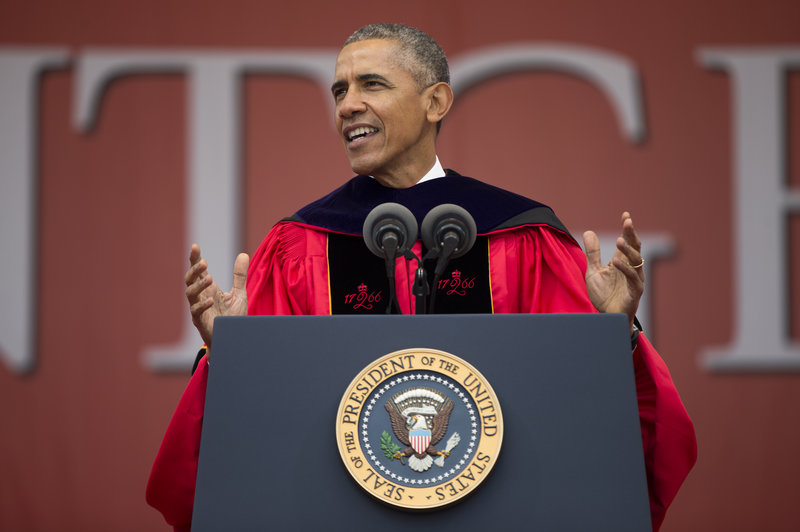 Some words of wisdom and grace from outgoing US President Obama from his remarks at Rutgers, The State University of New Jersey’s Commencement Address in May, 2016.

As US President-elect Donald Trump's in(s)ane Twitter tantrums continue to outrage on a national and  international scale and are deleted by the childminder, let us reflect on a dignified and level-headed grown-up whos words and actions have, and can, inspire current and future generations.

While this may be considered 'old news'; President Barack Obama's remarks at Rutgers, The State University of New Jersey's Commencement in May of this year particularly resonate today in light of Trump's winning the Electoral College Vote (but NOT the Popular Vote!) of the 2016 Presidential Election.

Here are just some of the important points President Obama raises in his landmark Commencement address:

ABOUT IGNORANCE AND LIES:  "But when our leaders express a disdain for facts, when they’re not held accountable for repeating falsehoods and just making stuff up, while actual experts are dismissed as elitists, then we’ve got a problem.  (Applause.)"

ABOUT NATIONALISM/ISOLATIONISM:  "Suggesting that we can build an endless wall along our borders, and blame our challenges on immigrants -- that doesn’t just run counter to our history as the world’s melting pot; it contradicts the evidence that our growth and our innovation and our dynamism has always been spurred by our ability to attract strivers from every corner of the globe.  That's how we became America.  Why would we want to stop it now?  (Applause.)"

ABOUT ANTI-ENVIRONMENTALISM:  "Every day, there are officials in high office with responsibilities who mock the overwhelming consensus of the world’s scientists that human activities and the release of carbon dioxide and methane and other substances are altering our climate in profound and dangerous ways." ...

"I mean, listen, climate change is not something subject to political spin.  There is evidence.  There are facts.  We can see it happening right now.  (Applause.)"

ABOUT THE IMPORTANCE OF VOTING:  "Politicians care about being elected, and they especially care about being reelected.  And if you vote and you elect a majority that represents your views, you will get what you want.  And if you opt out, or stop paying attention, you won’t.  It’s that simple. (Applause.)  It's not that complicated."

And on that note, I end my column on Political/Social/Economic Change Starts With You.  Don't sit idly and mindlessly by while intelligence, respect, facts, community, and a better future die (Well, at least for 4 years...).

Apathy ran rampant this year during the voting process.  From what I've read, there were at least 90 million eligible voters who sat on the sidelines this year and did not vote - and look what happened.

So, in 2 years, in 4 years, and in 8 years, VOTE - preferably for positive, inclusive change that will continue the legacy of President Obama and the Democratic party (i.e., for human rights, women's and minority rights, environmentalism, intellectualism, facts/science/math, Social Security, Medicare, and Medicaid, etc...)

The full transcript of President Obama's Commencement Address is at the official White House site.