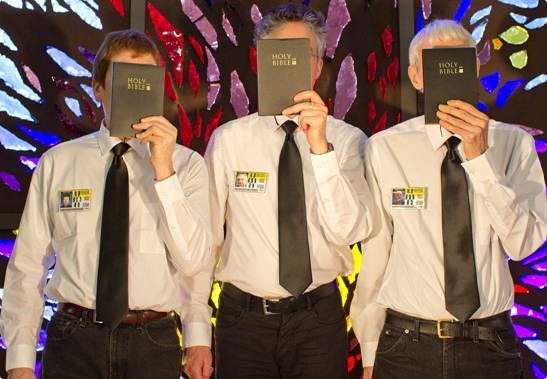 The boundary-pushing band releases a double album that aims to provoke and entertain.

“It’s All In Your Head" is the culture-jamming band’s first album release in six years and asks why humans believe in God.

“Right Might,” a selection from Negativland’s new double album It’s All In Your Head, is a goofy riff on imperialism (and minimalism), war mongering, and intolerance.  Negativland utilizes animatronic audio obtained from rogue Disney employee:

Negativland’s new album, It’s All In Your Head, finds the group tackling their biggest subject ever: why humans believe in God.  Millennia-in-development, this ambitious and densely-crafted double CD is packaged inside an actual Holy Bible which has been appropriately repurposed into a “found” art object.

It’s All In Your Head intends to entertain, inform, and provoke.  On the CDs, Negativland mixes found music, found sound, found dialogue, guest personalities and original electronic noises into a compelling and thoughtful musical essay that looks at monotheism, Christianity, Islam, Judaism, neuroscience, suicide bombers, 9/11, colas, war, shaved chimps, and the all-important role played by the human brain in our beliefs. Reading the attached Bible is optional.

The audio is presented as a live radio broadcast, modeled after Negativland’s weekly “Over the Edge” radio program on KPFA FM in Berkeley, CA. This theater-of-the-mind project has been carefully crafted from basic tracks recorded live in front of blindfolded studio audiences, and documents the unique style of live collage performances that Negativland has been presenting on stages, and on radio, since the formation of the group in 1980.

Since its previous album release six years ago, Negativland has kept busy with its weekly radio program, lectures, art gallery shows and live performances in the U.S. and Europe.  Currently in the works are several different studio albums, including Negativland’s all-electronic “Booper Symphonies,” two brand new “Over the Edge” album releases, more art shows, and a new touring live show called “Content!” which recently played to a capacity audience at Seattle‘s Bumbershoot Festival.

EP out from Psych-rock band Whitewash