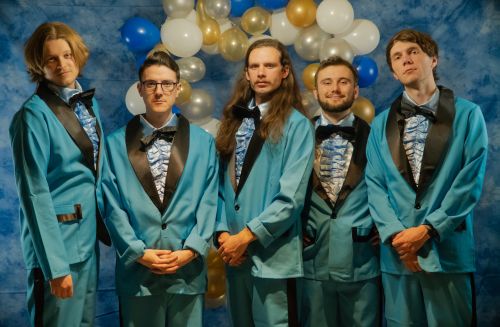 The London-based band runs down the powerhouse tracks that shaped the outlook and sound of their True Motion EP.

Kick-ass London-based punk rock band Real Authority are taking the piss visually in videos and promo photos, with their powder-blue prom suits, with are exuberantly pissed off on record.

And that disc would be the just-released 5-track True Motion EP, out on their own label Chapter One Records, that showcases the band’s bludgeoning beats, massive grooves, and raging guitars and vocals.  They’re the ones on prom night who spiked the punch and kicked up a right-on ruckus, turning the lovebirds’ dance into a riotous melee.

Rebel Noise is stoked to present a detailed rundown from the band members of the music that influenced the potent songs off of True Motion.

SAUL: We’re big fans of ‘90s metal, particularly myself and Ben. I’ll never claim to be familiar with Machine Heads discography front-to-back, but I will say that the use of harmonics and heavy riffing in this particular track were definitely in my mind when I wrote the guitar parts to “PARTY MANSION”.

“No Sleep Till Brooklyn” - Beastie Boys

JOHN: Tell you what, I love how simplistic a lot of the guitar work is on Beastie Boys’ tracks. Just goes to show you don’t need to over cook things. Something I very much took on board when it came to “CAN’T FACE IT”. The chords in the chorus follow the vocal line and gives the hook that sweet, sweet boost that it so deserves!

Whilst we were working on the video storyboard, I remembered how great that moment in the video to “No Sleep...” is when Kerry King turns into a gorilla. At least, I’m pretty sure that’s what happens. Anyway, we stole that and made it our whole video!

JOHN: Fun fact for you - in a band Marek and I used to be in, we covered this song acoustically and it sounded really bad. I’m not sorry, but I am glad none of you can hear it. Much has been said about “THE ENERGY” sounding super Nü-metal, and it really does, but it all comes down to “Break Stuff” (and Chumbawumba ‘s “Tubthumping”). Couldn’t have done it without em!

SAUL: I like to think that if Wes Borland ever heard “THE ENERGY” he’d at least want to sue us. I hope he sues us. We need the publicity.

“Apocalypse Now And Then” - Every Time I Die

JOHN: I bloody worship this band, so when Saul turned up at my house playing the opening riff to “PARTY MANSION”, I almost knocked him right out. Got me feeling very giddy. Almost as soon as I heard it, I knew what I wanted to write the song about, and it came out exactly as we all wanted it to!

JOHN: This is a song that Ben introduced me to years ago, and I just love how there’s somehow a hooky chorus in amongst this properly heavy music and dark imagery. I take that on board when we’re writing heavier songs like “DEPRESSION ISSUES”. Need to keep a sense of melody alongside the dark riffs and atmosphere.

JOHN: When I was really getting into hardcore, and less punk music, I heard this song and it gave me the willies. It hits so hard and I couldn’t stop playing it. It came out 8 years ago and I’m still not bored of it. I really wanted to have a song where we all just shout the hook line. It kinda fell into place when you realise it’s a phrase that a lot of people internalise on a daily basis. Ooooh, the catharsis is real!

“The Path” - Brutality Will Prevail

JOHN: It was only after we’d got the masters back for the record that I realised I lifted the entire chorus from this song for “DEPRESSION ISSUES”, but hey ho, I made it less accessible and even weirder. I’m pretty sure Saul is in the video, and he tells us all every single time BWP are mentioned.

SAUL: So, for anyone non-guitar-savvy, there’s an effect called a “flanger” that I’m obsessed with because it makes my bandmates look at me in disgust. The first time I heard this effect being used in a way I really liked was in the intro to this song. And I tried to replicate the sound I heard in the breakdown section to our song “THE ENERGY”.

“Throw It Away” - Trapped Under Ice

SAUL: Such an underrated track from the Heatwave album! I love the sound of Justice Tripp’s thuggish vocals, the blaring riffs and face-melting solo all in a compact 1:30-minute package… I feel like I’ve just described all of our songs.

JOHN : This track, and pretty much every other song they’ve released makes its way straight into my writing. I was rinsing Nonstop Feeling when we first starting writing music together. I think that comes across in tracks like “CAN'T FACE IT” and “PARTY MANSION”!

SAUL: Our drummer Ben has great taste in music, FYI. There was a time when I barely ventured past Iowa in Slipknot’s discography, then Ben showed me this track and it all changed. Generally, Slipknot are just one of those bands you can’t afford to overlook if you’re playing the heavy.

SAUL: Any good metal group is influenced by Deftones at least a little bit. I’ve never heard a band so complex, yet unashamedly simple… The raw vocals and groovy power chord riffs on Around The Fur and White Pony provided vital inspiration in general for TRUE MOTION, but this track in particular was in my head for certain parts of “BACK IT UP”.

SAUL: Rock The Fuck On Forever was quite literally on repeat around the time we started writing for this band. Ultimately however, I think the way Angel Du$t have carried themselves in the hardcore scene resonated with us the most. Vibrant colours, fun videos, tongue in cheek attitude… all stuff we can get down with.