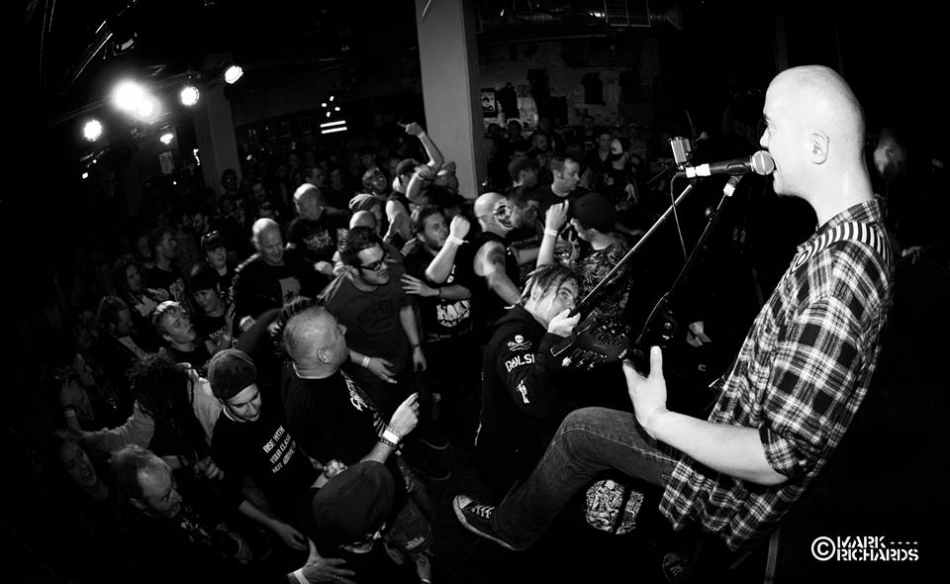 
[Andy] Myself and Big Hands met whilst doing art courses in college in the late 1990s in our hometown of Stafford. We have actually been in bands together for 18 years now, which makes me feel very old. We both ended up moving to Manchester in the early 2000s and I think we met and got to know Matt at various Manchester gigs in about 2004/5.

[Big Hands] As Andy has said we've been doing this for the best part of 20 years. I don't even really remember the beginning but it has turned into a kinda elaborate game of chicken on who's gonna give up first. That is showing no signs of happening anytime soon. And Matt, out of numerous people that we've been in bands with, seems to be doing the best at putting up with us.

[Matt] I met these chaps when I was in a house share with their old guitarist – we then got pissed up and decided to do rocking. It has been, so far, acceptable.

[Andy] I remember my first band needed a drummer and a mutual friend suggested Hands. We had a drunken conversation about it and then it happened. It was only meant to be temporary whilst our previous drummer went traveling, but we’ve been stuck together ever since, although we didn’t start Revenge until 2004. Matt also joined after drunken conversations, in 2007. I believe we originally discussed starting a band whilst on a beach in Blackpool at Rebellion Festival after lots of cheap cider. We later decided that it made more sense for Matt to join our existing band as a second guitarist, when a previous guitarist left. Our original guitarist Dave moved to London a year or so later, so since 2008 we have been a 3 piece.

[Andy] I’m Andy. I do bass and vocals. Myself and Big Hands (Drums) were in a band called McGraw before Revenge.

[Matt] I’m Matt, I do guitar and vocals. Previously I have been a full on band slag, mainly on drums; I played for External Menace and English Dogs in the 2000’s, amongst many others. Now I want to form a Coronation St themed metal band called ‘Death Alahan’, where I will dress as a Great Dane and answer to the name Schmeichel.

How would you describe your music to your great aunt Clara when you ran into her at the family reunion?

[Andy] Someone once described us as “Motorhead on speed”, which I like. A review also described us as “Kid Dynamite playing Ramones songs”. I’ll also take that. But as Aunty Clara probably hasn’t heard those bands, I’d probably just describe us as the musical version of a heated argument in a pub.

[Big Hands] It sounds like a loud angry fight. I don't even attempt to describe it to anyone not involved with the punk scene anymore, I normally just reply with “yeah a bit like that” when someone says ‘punk'... Then they tend to say “you mean like the Sex Pistols?”

It's either that or play it to them, to which I normally get the reply “that's just a noise”. To be fair they’re right.

[Matt] If anyone in the family ever asks about the band, they generally just say “…Still in the band then?” I reply “Yeah” and then they do a little air guitar thing like in Bill and Ted. It’s a system that has evolved organically, and I do not wish to change this.


RN: How do you consume your music these days?

I must say though, that I do tend to buy a good proportion of my music directly from bands at gigs.

[Matt] Most of the music I buy is off bands I see play. TBH I haven’t had access to a CD player or most of my music collection for a year due to where I have been living. I’m moving soon though so will be back on it with a vengeance. It has been frustrating, but almost worth it due to how awesome it will be to have it all back again.

RN: What local venue would we most likely find you hanging out at when you're not performing? What band might you be checking out?

[Andy] We tend to be gigging outside of Manchester most weekends, but if we aren’t playing ourselves we can be found at small venues such as The Ducie Bridge or Gullivers, which are both around 150 cap venues, which have lots of great gigs. I was also part of a collective that put on the first Manchester Punk Festival ([url=http://www.manchesterpunkfestival.co.uk]http://www.manchesterpunkfestival.co.uk[/url]) this year, which was (mainly) at a bigger venue called Sound Control, where you can also see some slightly bigger touring bands.

And here are some bands I’ve been listening to recently: The Repossessed (Sheffield based 80s influenced hardcore) and Foxes Faux and Matilda’s Scoundrels (both play folky punky stuff).

You should also check out some of the bands on TNSrecords: The Domestics (80s hardcore punk), Vanilla Pod (skate punk), Wonk Unit (impossible to describe, just have a listen), The Franceens (garage). We also have a split coming up from Chewed Up (hardcore punk) and Casual Nausea (melodic punk stuff).

[Matt] I’m going to recommend Tosserlad from Leeds, Shithouse and Ill Gotten Gains from Basingstoke, and Brainfreeze from Yorkshire. All pretty evil, definitely worth a listen.

What (if any) causes does the band support?

[Andy] There’s loads actually. We try and do a few benefit gigs every year. We have done a couple for cancer charities already this year and have one planned for an animal sanctuary and one for ‘We Shall Overcome’, which is a weekend of gigs protesting government cuts ([url=http://weshallovercomeweekend.com]http://weshallovercomeweekend.com[/url]).

We have played at and are involved with FC United of Manchester, which is a ‘punk’ football club, quite similar to St Pauli in Germany ([url=http://www.fc-utd.co.uk]http://www.fc-utd.co.uk[/url]). It is a fan owned, one-member one-vote football team, who have built our own 5000 capacity ground through a community shares scheme. It is really inspiring and well worth checking out.

On a personal level, I have just joined The Green Party, so I plan to get more involved with that in the future.

Things aren’t great politically in the UK at the moment, with huge government cuts to the welfare state, health care, education and the arts, so I hope punk and music in general do step up and provide a platform to challenge these things, but also that people get involved in challenging these things outside of the music scene too.

RN: Any upcoming shows or other news you'd like to promote?

We are writing a new album at the moment, so you can expect that within the next year. We are all really excited by the new material. We do all our booking independently, so if anyone wants us to play their town or city, they should give us a shout.


Thanks loads for the interview, we really appreciate it.