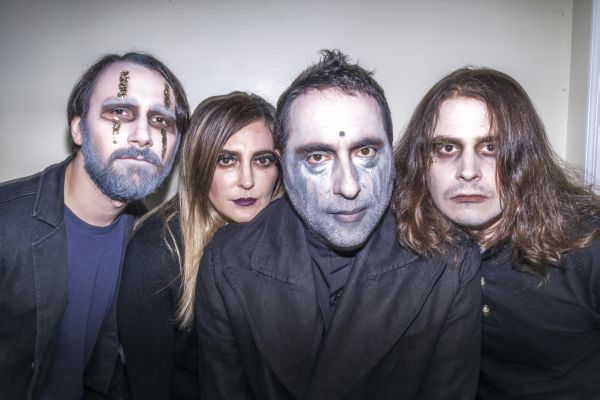 Acclaimed NYC-based psychedelic/sludge rock band Netherlands are set to release a spooktastic expanded version of their previous album, Zombie Techno, which was unearthed earlier this summer.

Netherlands frontman Timo Ellis (vocals, guitar) is a veteran avant-rocker who has collaborated with such luminaries as Yoko One and Cibo Matto. He’s joined by Chealsea "Thee Chuq" Wierbonski on synthbass, Josh Musto on synthbass, and drummer Damien Shane Moffitt.

The sonically wicked bunch have added 3 bonus tracks on the LP and Rebel Noise is stoked to host the premiere of one of them, the devilish dancefloor/rager mash-up “Go Wrong.”

Netherlands aren’t afraid of spectral melodies and dreamier haunting vocals (at least on the verses of this number), but then they drive a giant and grungy fuzz guitar stake into the heart of the chorus sections.

“Go Wrong” is one helluva dark-disco blast that rattles the skeleton and gets them old bones grooving. So take a taste of this frighteningly fun treat – and check out its timely message about unplugging from the artificial, and many times damaging, social world.

As Ellis puts it, “This song could broadly be said to be about deprogramming oneself from the cycle of endless media consumption/mediation, and the endless commodification of the self, which is the ideological and commercial lifeblood of the modern media superstructure, i.e. in the name of regaining one’s psychological sovereignty/agency… log OFF, a lot more often...” (And after you listen to this wicked-cool track, of course…)

And keep an ear or two peeled (Ouch!) for Netherland’s next (and 6th) studio album that’s wrapping up now. It’s already been recorded with Converge’s Kurt Ballou at GodCity Studio (Torche, High On Fire) and mixed by Grammy-nominated producer Alex Berthelot.