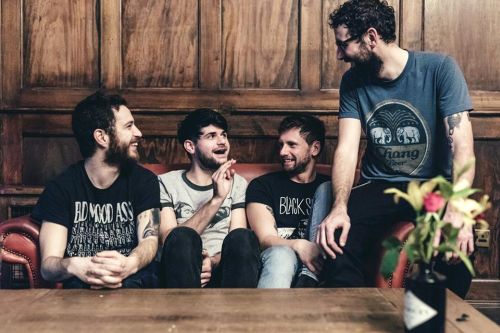 Indie punk rock band Quitters hail from Montpellier, France, but have covered part of the globe with more than 100 shows in Western and Eastern Europe and the U.S. They formed in 2015 and released their first record, the Move on to honest things EP, that year. In April of 2017 they dropped their debut album, Good Night Memories.

This year they’ve unveiled two singles off their upcoming second EP, Singing Like Nobody’s Listening, which is scheduled for a January 2019 release.

Rebel Noise is excited to host the premiere of the band’s up-tempo, enthusiastic third single, “Letter To Forgotten Friends”. The song’s dynamically choppy to cantering pace is filled with rough, but rousing exclamations, the interplay (and melodic pluck) of wiry guitar lines, crashing cymbals, and emphatic drum strikes.

Quitters will be going on tour this spring, from March 4th to 10th in France and Belgium.

The band also kindly and insightfully answered some questions about the song, what it’s like to be a punk rocker in France, and the current socio-political turmoil in that country.

Hi guys! So good to connect with you about your 3rd single you’re your upcoming album. What is “Letter To Forgotten Friends” about lyrically?

Time slips away - Even in friendship, we lose sight of each other - The paths go in different ways. That's why our memories are so important. Nevertheless, it's an optimistic song because all these past moments are unforgettable and make us live in the present as we are. In a sense, we have to be thankful to be able to look at our past, and especially on our youth, with emotion.

How does the sound/feel of the song tie into the lyrics?

Despite the sadness of the subject surrounding this song, it's a positive song. The atmosphere of the music proves it, especially the end of the song when we try to change the “color” of the music, and the lyrics are about sharing a drink to the death of memories.

Is “Letter To Forgotten Friends” a taster for what your upcoming EP will sound like, or do you vary your music style depending on the song?

We hope every song has its own “atmosphere”, but it’s quite hard to say. It’s hard to take some distance on our songs. What we can say is that we tried a new method in writing these songs. Our new drummer lives in Grenoble, which is 300 km away from our hometown (Montpelier), so we couldn’t practice as much as we wanted. We worked a lot through computers, sending demos and ideas to each other. The first and only time we practiced these songs all together in a room was one month before recorded them…

What is it like being a punk/rock band these days in France? What have your experiences been like and what have you observed?

In France, there are a lot of people involved directly, occasionally, or permanently in the scene. They are working hard to build a safe space where we can play music and speak about anything. We think the French scene is doing well; there are plenty of good people and bands. But recently we were speaking about the weird fact that we were the kids of that scene, and 10 years later we will become kind of the “middle age” or “old” guys of that scene without meeting that many newer kids coming up…

Anyway, there is a sincere solidarity, not just between bands, but also between all the people surrounding the scene and sharing the same values like DIY labels, promoters, association etc. In a way, it's a big family, with everyone trying his best to take care of each other. It's a healthy thing to have this kind of positive support and feeling. We are lucky to make sincere relationships these past four years as Quitters.

Unfortunately, there are still shameful behaviors that are poisoning this little world like machismo or xenophobia. There are more and more bands taking a stand and supplementing actions to their music. It’s the perfect time to do it.

We just lacking in more ecological statements in the scene right now. That’s also a critical issue to us. As a touring band, we are increasingly aware of our ecological impact (taking planes for tours overseas, using gasoil like crazy, printing merchandising, etc.). It’s crazy to simulate our annual carbon impact and see that it’s higher than the average in France just because we play in a band, despite every effort that some of us are doing every day (not make waste, being vege/vegan, etc.). We need to change the way we act and tour.

Today we are beginning to offset our carbon impact after each tour by giving money to ecological associations like co2solidaire and Good Planet (to name couple French organizations), depending on how many kilometers the tour was. We also want to choose eco-friendly merchandising. There are plenty of things to do. We have to go beyond the simple speeches with friends and get involved more and more with concrete actions, acting permanently to promote our social, cultural, and ecological ideas. We need common sense. Okay, I guess we went off with this question…

Thanks for those details! What you say makes perfect sense, especially about trying to lessen our negative ecological impact on the planet, so it stays in better shape and can support the future generations well.

Going even deeper into the socio-political turmoil that is currently destabilizing your country, what do you think of President Macron and his policies/ideas? Do you feel he is ushering in a new wave of progress for all people in France, or is it the same old politics as before?

Macron is linked with the financial, business, and banking communities. He used to work with Rothschild bank. For example, one of the first things he did when he was elected was to abolish the wealth tax (ISF). By abolishing it, the State not only lost a significant proportion of money, but also a symbol. Based exclusively on solidarity logic, the removal of this tax can only be seen as an injustice by certain social classes.

He is in line with what we’ve been used to: a neo-liberal economic politician, and he pushes this logic further than what the former presidents had dared to do. Some French people were disconnected with politics and when the day came to choose our new president, they wanted to believe him - because he’s young and they needed “fresh blood” in the government.

The media was pushing for Macron, so they naively believed it. He is also well-known for his arrogant sentences. Our “president” can stand in front of a camera and say, “A railway station is a place where people that succeed can meet people that are nothing”… (to quote only one sentence…)

Today, the lower and middle classes are paying more and more (including students and retired people). By taxing the gas and saying it’s about ecology, the government went too far. Most of us can’t buy an electric car (which are not green either!), but most of us MUST buy gas to work or simply go to work.

It’s also important to say that the logic is totally stupid. It’s been proven that rich people are polluting more than the poor. By taxing the gas, poor people will maybe not be able to buy it anymore, but the rich will still buy it. And so what? What is the ecological progress? We are in agreement that we have to think about how we can reduce our gas dependency, but why increase the gas price without thinking about reducing the public transportation price or getting it free? Why are kerosene and fuel used for planes and supertankers not taxed (they are way more polluting than every car on the planet)?

Four weeks ago, people started to protest against the gas price, and for the first time it wasn’t about left or right wing - It wasn’t about any political wing. People were united and still are. It has become massive. And when the government still stand by its position, people in the streets were speaking about everything wrong in the government nowadays, not only about gas.

The more the government waits, the more the complaint list grows. We are now speaking about increasing the minimum salary, setting down a maximum salary, including a citizen laws participation to the constitution (RIC), setting down some kerosene and fuel taxes, and a ban as soon as possible on every plastic bottle - and so on for about 25 claims at this time!

We are living in an important moment in our history where we can be heard even if police repression is much higher! We are tired of them, of living on their planet. For example, Macron was named “Champion of the Planet” by the United Nations Environment Programme (UNEP) a few days after Nicolas Hulot, our Ministry of Ecology, gave up, saying that nothing can be done in this country ruled by lobby groups…  How disconnected can they be?