Song Premiere: “She’s A Monster” by The Orchard Keepers 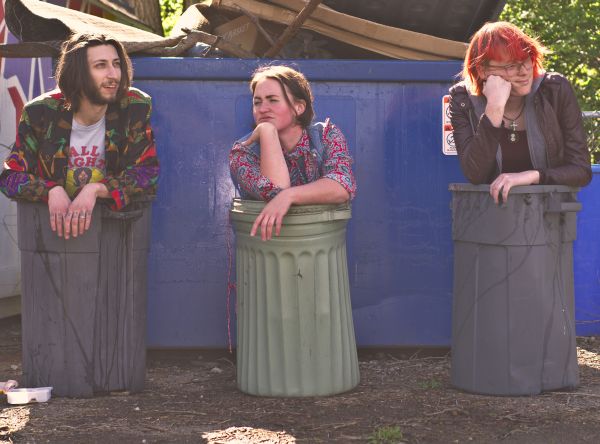 Basement/garage rock band The Orchard Keepers blow up against homophobes on a roiling rocker and give details about the track and upcoming album.

Indianapolis-located basement/garage rock band The Orchard Keepers will be unleashing a new album, titled Rotten Holler, on March 12th, 2021, but ahead of that they explode on the vitriolic “She’s A Monster,” a track that rages against homophobes.

The message is a personal one, with the band’s songwriter, vocalist, and guitarist Ayanna Miller being a member of the LGBTQ+ community. She condemns those who are narrow-minded and prejudiced, passionately blasting the haters on “She’s A Monster.”

Miller is joined by Ella Roberts (bass) and Nick Underwood (drums) and together they create a mighty racket as The Orchard Keepers. Miller and Roberts are childhood friends who in their teens started writing and playing music together.

A decade or so later, and with Underwood in tow, the trio have been performing electrifying shows throughout the Midwest.

Miller explodes towards the end of the song, and the instrumentation mirrors her rage-fuled angst as she rails against the bigots and the bullies from her past and who, unfortunately, still exist today.

Miller reveals details about the creation of the song, commenting, ““She's a Monster” started out as a product of late night drunken hang outs/band practices. I decided to expand on what loose riff ideas we had once the shut down hit, mainly as a way to do something meaningful with my time.”

“The instrumentation is fairly stripped down to emphasize the lyrics which are basically a big "fuck you" to those in my life who have condemned me simply because I'm gay.”

“I hope those that listen can find their own meaning, strength, and solace in this song and know that they aren't alone. We'll be your new mom.”

Tell us about the message and the backstory for “She's A Monster” in your own words. It's a pretty heavy and raw track.

For me the song is very much spoken from the perspective of my younger self. This anxious little kid that would do anything to make certain people in her life happy and proud hit with this realization that because she’s gay those people will always see her as a monster.

There’s a sort of confidence that comes from that. It’s certainly a heavy song, but it’s also a song that says, “You’re really going to be scared of me? Out of all the things you could be scared of, that you could hate, you chose me? What an absolute loser you must be.”

All that being said, I really want people to find their own meaning and solace behind this song, and to know that they’re not alone. Or, if nothing else, just jam out to it and enjoy it for what it is.

How do you write and record? This track sounds very unvarnished and in-the-moment, like the listener is right there in the room with the band.

All of the songs we record are basically recorded live. We’ll go back and listen to the track once we have the bones of it, and then start the process of layering, overdubbing, adding little bits of flavor, vocals, etc. This album, as well as our first album and our EP were all recorded at Plot 13 Studio. We can’t recommend the place enough. Fantastic people, and always a fantastic experience.

Give us a little sneak peek of your upcoming album Rotten Holler. What are you most excited about and how do the rest of the tracks compare to “She's A Monster”?

We are super duper excited to release Rotten Holler out into the world! A lot of these songs are songs we have been working on since our first album was released. The subject matter of Rotten Holler as a whole is definitely on the heavier side. All of the tracks including this one tie into an underlying theme that we hope the listener can pick up on, appreciate, and maybe even relate to!