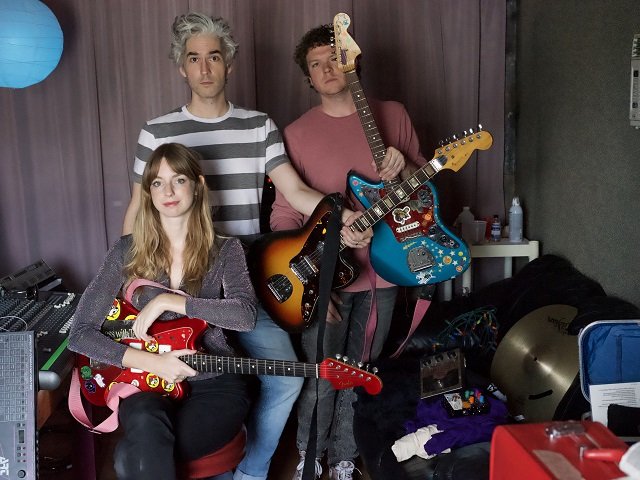 When you envision shoegaze pioneers, Ringo Deathstarr is without a doubt a household name for those considered diehard fans in the genre. Initially formed in Austin in 2005, the trio has released their sixth and self-titled album today via Club AC30. Adamantly working to hone in and mature their sound, the record comes post birth and loss — from the newfound role of guitarist and vocalist Elliott Frazier becoming a father as well as the loss of bassist and vocalist Alex Gehring’s mother. Citing influences from Cocteau Twins and Sonic Youth, Ringo Deathstarr works in fusing seemingly contrary elements together, creating a record that is simultaneously dynamic and intimate, graceful and cacophonous all at once. Leading as their gorgeous cinematic opening track, “Nagoya” pays homage to a country that has continued to embrace them with open arms throughout their career, while the remaining twelve tracks lead the band verging towards dissonant and energetic territory. In their music video for “God Help the Ones You Love”, drummer Daniel Coborn provides the backbone structure as Gehring’s voice soars to lush heights. Considering their five year hiatus in between albums, Ringo Deathstarr proves that this one is entirely worth the wait.

A once imaginative and visionary theme coursing through El Lago’s latest music video for “Moths” now feels almost tangible given our current state of the world. Released off their 2019 EP Pyramid on Wallflower Records, Galveston’s shoegaze and indie-rock quartet delve into ominous territory as vocalist Lauren Eddy finds herself confined to her bedroom and a darkened movie theater, all while being watched and surrounded by scientists. With pulsing basslines, percussive blasts, and Eddy’s breathy vocals, El Lago creeps into darkly dizzying spells in not only their instrumentation but with their anxiety-provoking visual elements as well. Directors Lindsey Cooper and Sergio Trevino masterfully lay out the claustrophobic perspective and embody a smothering sense of fear incapsulated by as they dive deep into the hidden layers of the subconscious. You can purchase Pyramid on their Bandcamp page here.

Going under the moniker WARMTAPES, Houston’s David Upp is underway in his process of recording his first full length album. Encompassing intimate singer-songwriter qualities, his first single and music video for “Pom Pom Song” was released earlier this month. Upp crafts a meticulous but seamless vision of honing in on the heart of life’s universal emotions as he delicately croons, “so put away, put away, put away your pom poms/cuz I wanna be, wanna be, wanna be the one to cheer you on” amidst a backdrop of a high school gymnasium and cheerleader outfits. He juxtaposes lighthearted gestures and playful humor with his richly warm vocals and minimal yet defining guitar strums, capturing his audience by highlighting a musical simplicity that’s nuanced in its very nature.

Released off Richmond label Citrus City Records today, Dorio’s debut album Yesterday The Sky Was Blue is the ultimate complimentary record to spin to jumpstart your spring mornings. An upbeat and feel-good bedroom project of Austin’s Chaz Doriocourt and his partner Rachel Rascoe, the album’s ten tracks encompass a comforting accessibility into life’s recurring themes with an eye (and ear) for curiosity and emphasizing moments that would normally pass us by. Doriocourt says of the album’s self-titled opening track, “Each verse is set up chronologically to act as little stories that happen throughout my day. And sometimes the days just drag on […] but I’ll usually find some sort of happiness in each day.”  Their album is available for purchase digitally as well as on cassette.

Song Premiere: “The In-Between” by Bloodsport