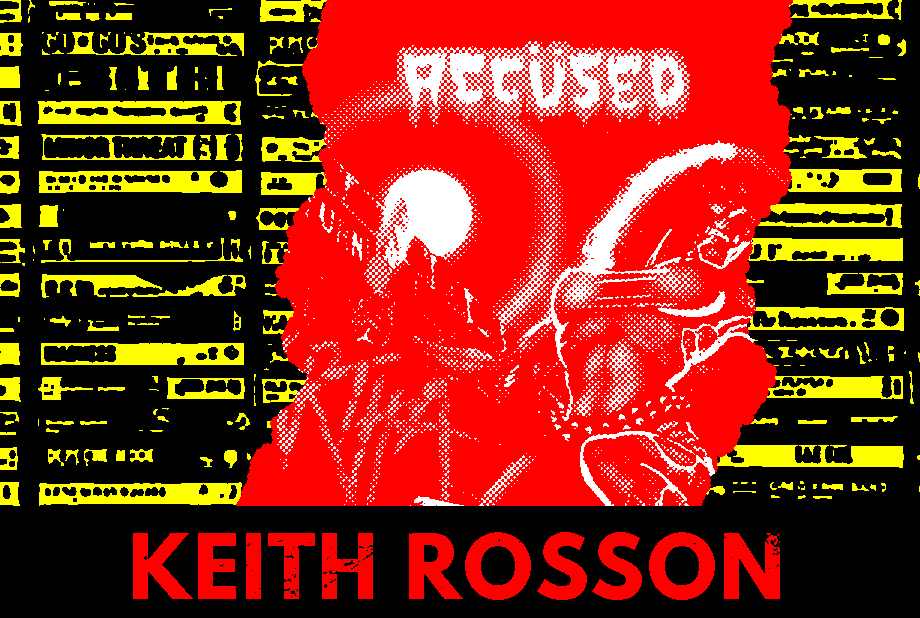 In which Keith Rosson summates the past decade by offering up the only top ten list (okay, eleven) that truly matters – i.e., the best cover songs ever performed, in order of greatness, by the Accused, thrash crossover masters and most ripping band to have ever strode (strided? stridden?) the earth.

I first heard the Accused when a buddy showed me his LP of Martha Splatterhead’s Maddest Stories Ever Told. I was new to punk, just a kid, and getting inundated with all of these bands that were doing their best to just absolutely melt my brain. (That record collection is still something I think about regularly. So many gems.) But no band messed me up the way that the Accused did. They sounded like a fun, deadly, enlivened monster brought to life and sent careening around the room, pulling out their stitches and knocking shit over. The cover of Maddest Sotires alone – with a blue-skinned, mohawked Martha Splatterhead chomping down on the innards of some poor fool’s skull – was unlike anything I’d ever seen before. As an artist who grew up on Marvel comics, seeing punk illustrators like Nick Lant (Subhumans, The Day the Country Died), Mad Marc Rude (Misfits, Earth A.D.), and Jeff Gaither, who co-illustrated Maddest Stories with RK Sloane, was mind-blowing. And the music! This perfect melding of fierce punk and metal without the gratuitous solos, and Blaine Cook’s troll-like yowl over the top of it. They’re still, hands down, one of the greatest bands that punk ever produced.

Not only that, but their cover songs – and this isn’t a dig because the band frigging rips – are among the best things in their catalog. And they did a fair number of them throughout a multitude of albums. There are some that I chose not to tackle here, just due to space limitations – Thin Lizzy, the Germs, Sugarloaf – but here’s my top eleven favorite Accused covers, in order, going from least cool (which is still pretty cool) to just jaw-smashingly awesome. Dig in, nerds.

Here’s the thing about the Accused. They were all, presumably, stoners. Raised on ‘70s stoner rock and psychedelic shit. I’m not going to pretend to know what the home lives were like for members of this band, but one can assume they dug music a lot and listened to a multitude of stuff growing up. That shit gets in your blood, man. Deep Purple’s “Hughway Star” is a fun, uptempo tune peppered with falsetto shouts, with the original clocking in at a hefty six minutes. The Accused trims the cover down to two minutes. This song – taken from an early cover/odds and ends collection LP, Hymns For the Deranged – is the only one in this list that features the Accused’s first vocalist, John. This is early, demo-era stuff. He’s a solid enough singer, and there’s a certain charm inherent in the boombox recordings offered here, but there’s a reason why this is taking the number eleven slot.

10) “Symptom of the Universe” (Black Sabbath)

This one’s nabbed from what sounds like a practice tape; before the song, you can hear the band talking about how many times to play what parts. “So remember, ‘Symptoms’ has three singing parts, not two.” Another tune from Hymns in which they carve a six-minute song into something under three minutes. Again, not a skull-melter, but I’m not much of a Sabbath fan either, and the “recorded in our practice space in 1985 and later put to vinyl” isn’t doing them any favors. Still, it’s telling that this is the type of stuff that they’re choosing to cover. They were ambitious as hell with the songs they chose.

From much later in the band’s tenure, their cover of “Boris the Spider” shows a group of fully-realized musicians, people who have been playing together for a number of years. A cut from Grinning Like An Undertaker, it shows just how committed they are to rock from the ‘70s, and how seamless the band would eventually become. From the “creepy creepy crawly crawly” falsetto parts and the Freddy Krueger-esque intonations of the title itself, it’s actually a pretty faithful rendition, with the majority of the difference being in the cover’s beefed-up guitars.

Right around the same time I was exposed to Martha Splatterhead’s Maddest Stories Ever Told, which this cover is taken from, I also got a 12” of GBH’s Oh No, it’s GBH! Growing up a small, isolated town in the ‘90s, well before the internet, you’d go to a record store with your allotted bit of money and you’d take a gamble on a band you’d at least heard of and just hope for the best. That 12” remains, hands down, my favorite GBH record, and I never really got terribly into them beyond that. “Sick Boy” is from Leathers, Bristles, Studs and Acne, considered by most to be their classic album, alongside City Baby Attacked by Rats. And to each their own, you know? I like Oh No better, but that’s all just personal preference. What’s un-freaking-deniable is that this is one of those instances where the cover’s miles better than the original. While GBH’s version thuds along with a certain charming boom-thud menace, the Accused version just propels the song into something purely dangerous and otherworldly. Blaine’s yowls can conjure frigging worlds, I tell you.

Might not stack up to the original – which is near impossible, let’s be honest – but damn if it’s not a close call. Fast as hell. Originally on a Seattle-centric Damned cover compilation that came out in ’91, this was later compiled on The Baked Tapes LP collection in ’05.

Honestly not sure if this one’s better than the original, but when I was in 7th grade, a new kid in school made me a mix tape. In retrospect, it was a game changer, and a stunningly impressive introduction as a whole. There were bigger gateway bands like Violent Femmes, Black Flag, the Dead Kennedys, and all that. But there also a bunch of lesser known bands like Christ On Parade, the Stupids, Uniform Choice, the Jerry’s Kids cover of “Spymaster,” and this, the Accused’s version of the Angry Samoans’s “Lights Out.” I listened to this tape – and this song- hundreds and hundreds of times. Once more, a cut from Maddest Stories.

With the sparse instrumentation – they go nearly acoustic for certain sections of this oldie moldy hippie cut – and Blaine Cook’s monster-growls laid over it, it’s tough not to think that the band had reached near perfection with Maddest Stories. Something just gelled in that studio. Their previous outing, 1987’s More Fun Than An Open Casket Funeral, gets pretty close to perfection as well, but there was just something in the water in 1988. These guys were on fire. Outstanding cover.

You can say what you want about the Accused after Maddest Stories. They went down a certain path, it’s true. They attempted a kind of rap-metal fusion with 1990’s Grinning Like An Undertaker that wasn’t entirely successful, but it also showed a band leaning against their own constraints, and they achieve a kind of pneumatic precision, compared to the “faster and looser” quality of earlier records. Anyway, the fucking swagger in this Skynrd cover, off of their 1991 Straight Razor EP, is just phenomenal. Double-bass, a revved-up tempo, the cat-trapped-in-a-bag yowl of Blaine Cook’s vocals. They cut a five-minute song down to a three-minute song and carve all the bullshit from it.

From Hymns for the Deranged. Again, so much of the band’s inherent coolness rest in  Tommy Neimeyer’s guitar sound, and Blaine Cook’s vocals. He’s easily one of the most notable vocalists in punk – both in the Accused, and to a lesser extent in his earlier days with the Fartz. This cover of the classic Heart song is one of those things that makes me feel cooler just by listening to it.

Again, just makes you feel like a badass. The lilting, haunting guitar intro lasts for, uh, approximately four seconds before the band goes full tilt and just decimates this thing. You either love it or hate, but if you love it – this shit is unstoppable.

Probably the greatest adaptation the band did in their career, because the original Cliff Richard version of this song from 1976 sounds like something that would be in a CHIPS episode where the boys try to infiltrate a corrupt disco ball manufacturing ring or some shit. Did members of the Accused smoke a ton of pot as young kids while spinning this record? Were they mercilessly exposed to repeated listens of Cliff Richard’s I’m Nearly Famous album when they were young? We may never know, but they turned this song, from Open Casket, into a guitar-heavy piece of pure, unbridled menace. The whole band comes across as fully unhinged, and it’s a glorious, glorious mess.