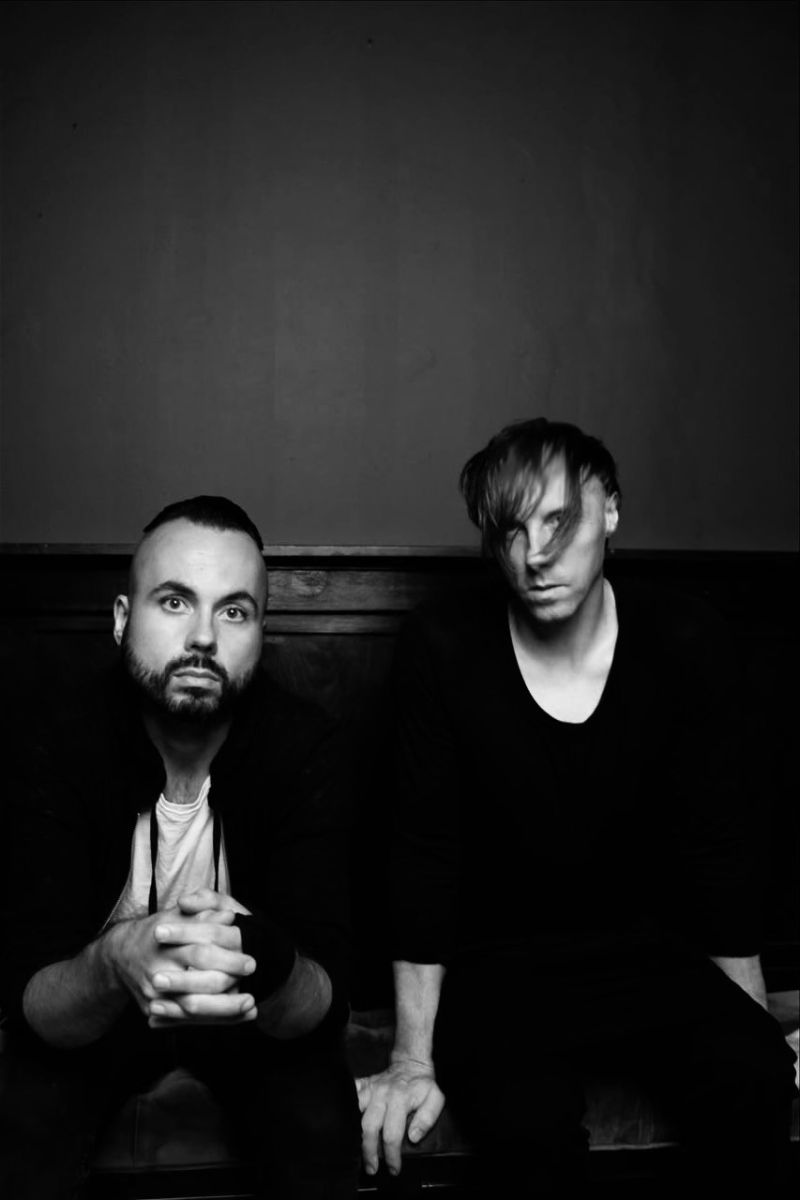 Hailing from Toronto, Canada, the dark and dramatic post-punk outfit TRAITRS create atmospheric and cinematic compositions heightened by passionate vocals and pressing instrumentation. Drawing inspiration from the realms of music, film, and artwork, the duo of Sean-Patrick Nolan and Shawn Tucker unreel vivid and dystopian scenarios through intense sonics and emotions.

Nolan and Tucker are equally heartfelt about the state of our society, offering up bleak, but ultimately realistic views in this installment of The Protest Interview series.

TRAITRS stellar and compelling upcoming album Horses In The Abattoir will be unleashed November 19th via Freakwave Records. It’s not to be missed!

Nolan: Hi I’m Sean-Patrick Nolan and I play synths and do the sampling and sequencing in TRAITRS. We are a post-punk, dark wave duo from Toronto, Canada. Our sound is cinematic and dramatic dark pop with flavors of goth, post-rock, and alternative rock mixed in.

Tucker: My name is Shawn and I’m the singer, guitarist, and lyricist in TRAITRS. We’ve been making music under this banner since 2015.

Nolan: Aside from COVID, the biggest national issue in Canada is definitely the discovery of the hundreds of unmarked graves of Indigenous children and the subsequent cover-up attempts from the Catholic Church. It’s despicable, and unfortunately I think social media and the 24-hour news cycle do it no justice. I think it’s easy and quite common for Canadians to compare ourselves with Americans with a feeling of moral superiority. For some it seems hard to accept that our founders committed horrific atrocities as well.

Tucker: I agree and it continues to this day with no sign of ever changing. Regardless of the skyrocketing suicide rates, addiction issues, and countless other problems ravaging our Indigenous population, our federal and provincial politicians seem content doing nothing about it. It’s a huge blemish on our country’s past and present, and it needs to be addressed. The other cause always near and dear to me is animal welfare. As a lifelong vegetarian, I believe that regardless of whether or not animals serve humans well, that’s not an excuse to ruin their habitats and slaughter them en masse.

Tucker: Yeah, the title is literal and metaphoric. Lyrically and emotionally, it allowed me to talk about the many cruelties inflicted by humans on all living species and our habitats. That theme runs throughout the album.

Nolan: Yeah, there’s even a sample of sounds from real horse slaughterhouses on the record.

Tucker: Also on our debut cassette Rites and Ritual, the track “Lya” is about the Indigenous genocide in North America. For various reasons, the topic hits very close to home.

Tucker: “Meat is Murder” by The Smiths. For all of Morrissey’s many current faults, the beautiful conviction and belief on that record and its influence on me and my art is immeasurable. It’s a message to the world, feelings left on the table, which is usually a turn-off for many listeners. It even inspired many to become a vegetarian themselves. Powerful, sad, and raw.

Nolan: And it also deals with the theme of humans performing horrible acts on each other and our environment.

Nolan: Honestly, I’m the first to admit hypocrisy. I’m definitely guilty of not doing enough for these causes, and it’s something I’d like to change in the future. I have a very close friend who works in social work and we often discuss ways to be more involved and helpful.

One thing we did notice while touring overseas is that Canada has a very squeaky-clean image abroad and most people are surprised to learn that we treated (and sadly still treat) our Indigenous population just as cruelly as the Americans. Having open discussions about this and owning up to the horrible parts of our past and present is a small way to start, but there’s lots of room to improve and much more to be done.

Tucker: They do really great work at https://legacyofhope.ca. Visit their site, educate yourself on the Residential School system and learn about other ways to get involved and make donations.

Nolan: Shawn has no hope.

Nolan: I have faith in young people to start correcting the many things that the current political establishment seems unwilling or too stubborn to change. It’s a long chance, but I really don’t have much faith in anyone politically in this country at the moment. I see and hear a lot of familiar horseshit that only emboldens the status quo in this country. Let’s get some fresh ideas and young, smart minds in there and start fixing things from the inside out. Be more open to change and fixing what needs to be fixed.

Tucker: Thanks a lot for giving us the time to talk about all of this with you.

Nolan: Yeah, thank you very much. You can pre-order our new album Horses In The Abattoir here: https://orcd.co/horsesintheabattoir. It comes out on November 19th via the Berlin-based Freakwave Records.