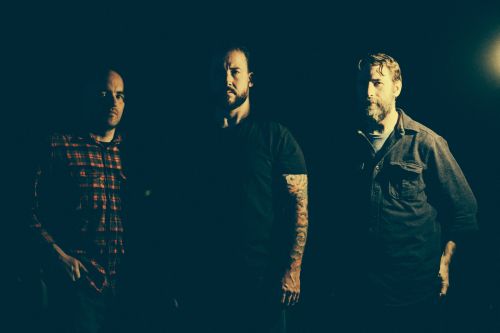 Heavy rock band Ampline lighten up on an engaging video for a single off their latest LP.

Cincinnati-based rock band Ampline have been churning out heavy, yet melodic music since 2001. Their latest (and 5th) album Passion Relapse came out in January of last year via SofaBurn.

Rebel Noise is psyched to host the premiere of the animated video. Done up in hand-drawn, black-ink images against a bright yellow background by artist Evan Wolff (Vacation, Don Giovanni Recs), the video follows a hairy, insomniac monster who ends up hearing the sweet sounds of Ampline’s tunes.

The creature makes its way to a church where Ampline are performing onstage (Yep, the guys are all shown rockin’ out!), at first staring through the window pane like a longing Audrey Hepburn window-shopping in Breakfast at Tiffany’s.

The crowd, however, ends up becoming a yummy snack for the beast. Hmmm, just like Audrey Hepburn eating a pastry in front of Tiffany’s - except bloodier! The band continues to jam, so involved in their music that they don’t notice a few members of the audience are missing… Now that takes dedication to your craft!

Ampline is currently working on songs for their next album. They play September 10th at Cosmic Charlie's in Lexington, KY with Hot Snakes.