Video Premiere: “Everyone Is Dead” by The Velvet Hands 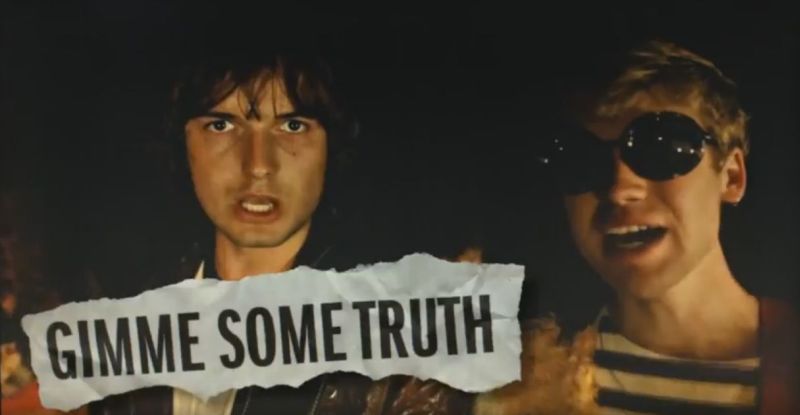 Smashing British garage rock/rock ‘n’ roll band The Velvet Hands have released an extremely relevant video for their kick-ass track “Everyone Is Dead” that boldly lambastes our socio-political idiocy, from the reprehensible people currently in power in the U.S. and U.K. to the moronic masses who continue to blindly follow them like sheep being led to slaughter by a pack of wolves.

Truth be told, the willfully ignorant in the general public and the divisive, derogatory, and dangerous-to-the-world politicians/businesspeople who are only looking out for themselves and their kind are so obvious and/or oblivious that they don’t need to be mercilessly skewered. They are already a mockery onto themselves.

Yet it’s still cathartic for us, the suffering and misfortunate, to sling justified arrows at these malevolent targets that (and who) are continuing to destroy our unity and civility, intellectual progress, human rights (and all the rights contained therein and without), and the viability of this planet that we all live on (which, you know, is needed for human and other lifeforms’ existence…).

So, as we collectively sink into the depths of the quagmire with some of us valiantly (and vainly?) trying to fight against the downward slide, The Velvet Hands offer a spot-on salvo with their video for “Everyone Is Dead”, directed and filmed by Mawgan Lewis at PurpleKnif. It’s a keenly potent, astutely thought-provoking video that expands upon the band’s song lyrics and encompasses much of the world’s problems.

As the band gives a defiant performance, ripped from the headlines images quickly flit by with topical add-on catchphrases and descriptions. For example, at the start of the song, co-vocalist and co-guitarist Dan Able exclaims, “All the politicians / telling you their lies” and “Bureaucrats and bankers loaning you your lives” while brief text sayings like “Politicians’ Lies”, “Inequality On The Rise”, and “Bankers Wankers” flash by. The band slide in some snarky asides like “Dog Ate My Marijuana” (The horror!), but it’s mostly on a serious tip.

The cultural and political bulls-eye is hit many times over during the course of the video, with direct strikes on the U.S.’s tyrannical and toxic ‘terrible twos’ Trump and the U.K.’s boorish Boris Johnson; Trump is labeled a “prick” and Johnson “clueless”. Symptoms of our collective spiraling down the drain take the form of clips of law enforcement in riot gear, industrial smokestacks spewing pollutants into the air, catastrophic fires blazing out of control, guns, drugs, unhealthy food, and more.

The take-home message of the song and video is one of common sense: to “do some living instead” of passively viewing all the global, national, and local ruination by staring vacuously at the telly (British for TV) or smartphone; to get up off your arse (British for ass) and do something productive with your life; something that will have a beneficial impact on you, your community, your country, and the planet.

“Everyone Is Dead” is taken from The Velvet Hands’ debut album Party’s Over, out since early May via ZenTen Records. Rebel Noise is proud to host the U.S. video premiere of "Everyone Is Dead".