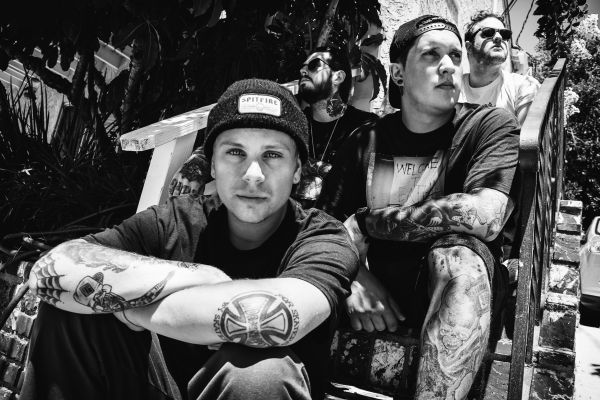 Los Angeles-based punk rock band Runaway Kids are known for their explosive, but infectious sound, intense vocals, and perceptive, searching lyrics that pointedly question the self as well as the (dis)connections in the familial and social worlds.

Runaway Kids formed in 2014 and they released their debut EP Better Days in 2015. Gage Armstrong (vocals), Sean Chamilian (guitar), Korey Keeton (bass), and RJ Shankle (drums) have toured with Pennywise, Strung Out, and Unwritten Law, and have been writing and recording new material.

The band dropped two new singles in May, “Take It All” and “Fade Away”, and right here Rebel Noise premieres a powerful, stripped down acoustic version of “I Remember” from Better Days.

The ever-restless band gets enthusiastic raves for their energetic and passionate shows, and they will be lending direct support to a Hawthorne Heights tour date, as well as performing at two gigs this fall in support of punk legends Dead Kennedys, T.S.O.L., and Dwarves.

Sean Chamilian took some time out of the band’s busy schedule to chat about the new acoustic take of “I Remember” and the video shoot for it.

Hi Sean!  Why did you choose to do a video for an acoustic version of your tune "I Remember" off your Better Days EP?

Hello, hello. When we initially recorded this song, we played it acoustically just for practice and realized that it sounded way cooler as an acoustic song. So here we are now a couple years later, actually releasing the acoustic version of it.

What do you find different or interesting about recording your music acoustically verses a fully plugged-in production?

What’s interesting is that any good song sounds good played acoustically. So you really test your songwriting skills out when you unplug everything and hear the song stripped down.

Where did you record the video and did you do several takes?

We recorded the video at The Hallway Studios where we’ve started to record all of our songs. Our longtime friend and amazing producer Daniel Braunstein helped us capture the song as you hear it in this acoustic video. Yes, it took us a couple takes because we had never played it all together like this before. So we got to the studio a little early and practiced for a little while.

Did you record any other songs acoustically at that time?

Nope, just “I Remember”, but we have an unreleased song that we definitely plan to record an acoustic version for soon.