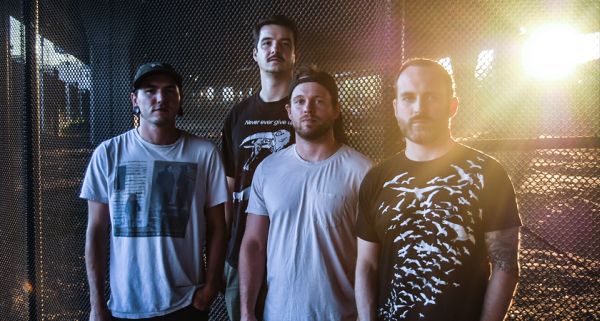 Hailing from Seattle, alternative/progressive rock band Black Plastic Clouds whips up a dynamic storm on their latest single “Mania.” Rebel Noise is stoked to host the equally vivid video for the track.

After much touring, they released Memento EP in 2016 and Headcase EP in 2017, and then they began the touring cycle again. After all the shows and life on the road, the brothers decided to expand the band to include Ryan Eville (bass) and Jasiu Pawluskiewicz (synths).

In 2018 Black Plastic Clouds worked on their music in earnest, teaming up with Jakael Tristram and Robert Lang Studios and recording a string of singles, including “Ignite” and “Mania.”

The outfit has set their sights on regional touring this summer and supporting their most recent songs and accompanying videos.

The video for “Mania” is as bold as its title and sound. The video clip’s footage is split between the band performing and the movements of a bunkered-down basement-dwelling conspiracy theorist poring through sheaves of paper and pinning words and symbols to a bulletin board. He’s searching for information about if demons exist.

The fast-cut editing flicks over images of heads in jars (Yikes!) and the ummm, yes, manic Ben Bradley emoting to the camera lens. Black shrouded figures with baby-faced masks plague his vision – and by the end of the video a black-masked horned horror appears – Are they real or are they all in his mind…?

Wanna throw myself into this Mania

How did I get myself into this mania?

This mania with you

Your only true desires

But your mask will break

The band reveal illuminating details about the video, stating, “For our second music video, we wanted to have fun with this one and have a storyline that mirrored the theme of the song. The video shows the main character (Ben) frantically searching for connections and answers to the demons that haunt him. I think at the end of it, he's not haunted anymore, and has accepted them. Without getting too deep in search of a meaning, it's more fun to just acknowledge and accept those things that haunt us, as the video ends with everyone playing together.”

“The second verse, "Your number's gone. You don't exist. / And now begins, your genesis. / You masquerade your only true desires, / but your mask will break,” brings up our false sense of identity, that we are more than just a piece of data, more than the narrative we tell ourselves and others (in this case, the main character's identity is wrapped up in being paranoid about what's haunting him) and what really could make us go crazy, is realizing that it’s all just a social construct, created by society and ourselves.”

All directing, production, and film editing was by Ben Bradley and Ryan Eville, filming was done by Joe Abarca of Brain Made Digital, and use of the white room was through DiTEC studios.