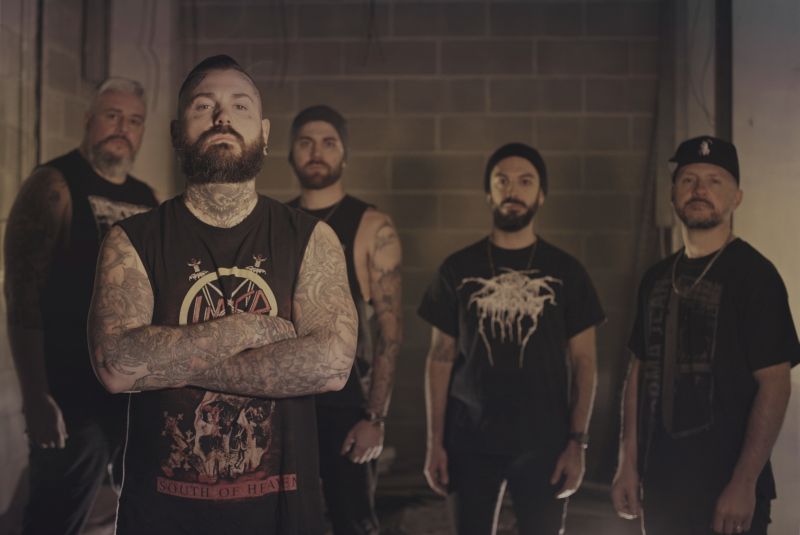 Milan, Italy-located hardcore outfit Total Recall, made up of veteran musicians, will be unleashing their upcoming debut album Always Together in July via Australia’s 1054 Records and Rising Nemesis Records.

The experienced musicians have put in over two decades worth of touring/recording in the metal and hardcore scenes. They joined forces as the mighty Total Recall in March of 2019 as a tribute to a departed friend and fellow musician.

Total Recall entered the public arena with their Wooden Scars EP in January of 2020, which was recorded, mixed, and mastered at Effort Studio by Marco Gervasio.

The metal and post-hardcore-influenced group then plowed right into working on material for their first album. They recorded Always Together at SPVN studios with producer Steph Orkid Santi (Cripple Bastards, Forgotten Tomb, Hiss from the Moath).

In preparation for the LP’s release this July, Andrea “Ronda” Rondanini (vocals) of Rise Above Dead, Stefano “Stef” Anderloni (guitars) of K-Again and Traces of You, Stefano “Bleed” Bigoni (guitars) of Rise Above Dead, Luca “Pigo” De Simone (bass) of K-Again, Samaritan, and Embrace Destruction, and Daniele “Danny” Calleri (drums) of Embrace Destruction unveiled lead single “Poison Flow” this past January with its accompanying video.

Rebel Noise is stoked to host the premiere of second single “Seas Of Illusions” and its accompanying performance music video.

The powerful performance video showcases Total Recall’s raw and raging live show energy that’s sure explode on stages once venues open up to the public.

Band members Pigo and Andy generously took the time to reply to several questions we had about their upcoming album, how the pandemic affected their work, and the music scene in Italy:

Hi guys! It's exciting times for you with the upcoming release of your debut album Always Together in July. While it's your first full length as Total Recall, you're all veteran musicians. What spurred you to form Total Recall?

PIGO: TOTAL RECALL were born to honor the memory of a great friend who left us. A person who has shared countless tours in different continents with Stef and me. A person who for twenty years has shared music and life both in Italy and in Los Angeles. His loss was a very hard blow. His sister told us that he wanted Stef and [me] to play together again, and so we did. We formed TOTAL RECALL by retracing his musical experience, and we built a lineup of people who either played with him or went on tour with him.

ANDY: Definitely, we are all really excited for this album to come out; it’s been a long lead up. The idea for the band came from Pigo (bass) and Stefano (lead guitar) wanting to pay tribute to our friend Massimo who passed away two years ago, so it’s close to our hearts and we’ve all put a lot of energy and heart into the band.

How did your previous music connections help with creating Always Together?

PIGO: While we obviously have a good number of connections after touring for more than twenty years, we didn't use any of these when creating Always Together. We wanted to start completely from scratch and rely only on people we knew from the old days and that were friends of Massimo. Of course... especially for the production we relied on producers we knew well and who knew Massimo well. In this way we have kept the spirit behind the formation of this band very much alive.

ANDY: Well, it was important to Pigo and Stefano that this band was formed of friends and those who knew Massimo. We all know each other because we have all played in various local bands of all kinds of genres over the years, so it’s great that we’re all comfortable with each other and we each have something a bit different to bring to the table.

You're based in Milan, Italy, but will be dropping Always Together on Australian label 1054 Records and German label Rising Nemesis Records. How did you get involved with these record companies?

PIGO: The pandemic has forced us to reschedule a lot. We formed in 2019 and released the first EP in January 2020. We used this time to sift through any interest from various labels around the world. The interest of 1054 convinced us because it was pure, very old-school, very oriented to the music we had created. We are veterans so this aspect was decisive in choosing the label. With all due respect to the other labels of course. 1054 then decided to do a co-production with RNR; we honestly weren't involved; our deal is and remains with 1054 Records.

ANDY: We sent a demo of first EP, Wooden Scars, around to a few different labels, including 1054 Records in Australia, and they came back to us and told us they liked the sound of our music and were keen to work together, as well as distribute our music in Europe through Rising Nemesis Records. So of course we were thrilled with that and it was from there we started the collaboration.

What is the metal hardcore scene like in Milan and the surrounding area, or even Italy in general?

PIGO: Honestly, I can't answer you for sure. I have lived abroad for many years and once I returned to Italy I formed TOTAL RECALL without caring too much about what was going on around. There are bands that are [vital] in all subgenres of hardcore and metal; the only thing I hope is that they have learned that no one becomes a ‘rock star’, and the few who manage to survive on music need support and not criticism. Envy leads nowhere. Without the underground there is no mainstream. The underground doesn't exist without a scene. We will try to build something; I don't know if anyone will follow us but we will certainly try. This pandemic may have been an opportunity to rediscover the value of belonging to a local or regional scene. We hope that the bands will return to help each other and not to envy each other.

ANDY: Well, it’s definitely changed a lot over the last decade. I’d say it’s potentially less popular with the younger crowds today. Until a couple of years ago I was living in London so can’t comment in-depth on what it’s been like in Italy more recently, but obviously with COVID restrictions preventing live music, I’d say it’s hurt the scene here a little bit. Things are definitely getting better here though and it’ll make a big difference when people can get back out to gigs.

Tied to your previous reply, what has it been like as a band dealing with the virus-driven pandemic and regulations? Italy was hard-hit for a long while. I hope the situation better in your country now!

PIGO: I think the pandemic took everyone by surprise. The confusion that followed certainly didn't help. We certainly felt the blow, also because we had already planned 7 months of concerts for the promotion of the EP. The good thing is that this pandemic has given us time to focus better on the album and the promotion work to support it. Things in Italy seem to be improving now, but uncertainty remains very high. We really hope that everything can return to a pseudo-normalcy as soon as possible.

ANDY: Yeah definitely, for us it was really unfortunate because we formed in the end of 2019 and had worked really hard to put the album together, and it was technically finished February 2020. We had started organizing gigs and had a lot lined up for the year, including festivals and other fun stuff, but like everyone, COVID hit us like a ton of bricks in March and everything was put on hold. The situation in Italy is improving day by day and we’re so thrilled that we can finally share this album with everyone. It’s been a long wait!

We're hosting the premiere of your potent performance music video for "Seas Of Illusions." What can you tell us about the meaning of the track? Does the video a good representation of what your live show is like?

PIGO: Andy can certainly be more specific about it. Personally, I recognize myself in the lyrics of this song. I think it represents the mood of many in this time of uncertainty. The video certainly represents the energy of our performances, but above all the authenticity of the expression we express when playing live. Not having had the opportunity to play live with this band due to the pandemic, surely our videos are aimed at expressing our attitude towards live performances.

ANDY: The lyrics for ‘Seas of Illusions’ are my favorite of all of our songs and it’s also my favorite song to perform. I was thinking of a kind of mystical, bad dream when I wrote it, so I think that’s the kind of vibe it gives off.

Will you be releasing more singles or videos in the run-up to your album release?

PIGO: At the moment we have made two videos to support the album, “Poison Flow” and “Seas Of Illusions.” We have planned at least 5 more that will be released over the next 15 months. We actually have already recorded the third video that we are planning to release to the public in September. We decided to work with a director very close to our reality to maximize the performance, but also some concepts related to the lyrics. We focus a lot on videos for the promotion of Always Together; we consider them a very effective communication method.

ANDY: We have been busy filming other music videos, but I’m not going to spoil any surprises.