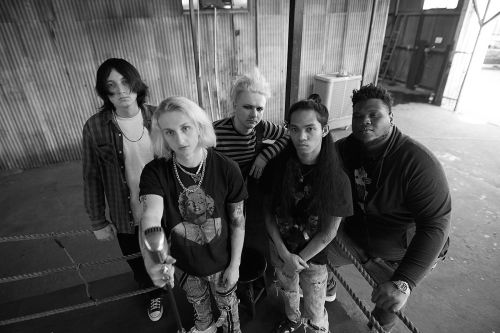 Los Angeles-located alternative rock band Lost Ghost have been steadily gaining notice over the past few years for their angst-driven music that conjures up the specters of grunge, ‘90s alt-rock, and ‘00s emo.

The songs were written before the pandemic hit, but the restlessness and anxiety that run through each composition feels very ‘now.’ The band uses the guitar as their focus-point, along with the conflicted lyrics and vocals.

While their music usually features a mix of old-school alt-rock and modern-day hip-hop/trap elements, they’ve pulled back on the latter in order to bring their guitar-heavy style to light.

Wrestling with tumultuous inner thoughts that question individual identity and worth in relation to the outside world, it’s easy to see why many listeners are especially attuned Love Ghost’s perceptive lyrics.

Rebel Noise is stoked to host the exclusive premiere of the fierce performance video, which was shot by Dan Bell, for the fervent electro-rock-driven highlight track “Tribe.”

The band describe the lyrical meaning of “Tribe” as being “about feeling betrayed by someone who used to be close to you, and learning that you need to be careful who you trust.”

Finnegan Bell is usually the primary singer and songwriter, but this time around bass player Ryan Stevens takes center stage. He wrote the song and is also the star of the video, with Daniel Alcala performing the guitar solo. All the other band members are also featured in the video.

The clip is set in a pouring rain that drenches Stevens as he sinks his teeth into the song’s potent lyrics. Emoting with vivid urgency, he lashes out, passionately exclaiming, “Your lies corroded our trust / Our ties have been cut” and “You’re not part of my tribe.”

And take a listen to the Sabertoothed EP below:

Song Premiere: “Before I Die I’d Like To Give My Regards To The Internet. LOL THE INTERNET.” by Superdestroyer