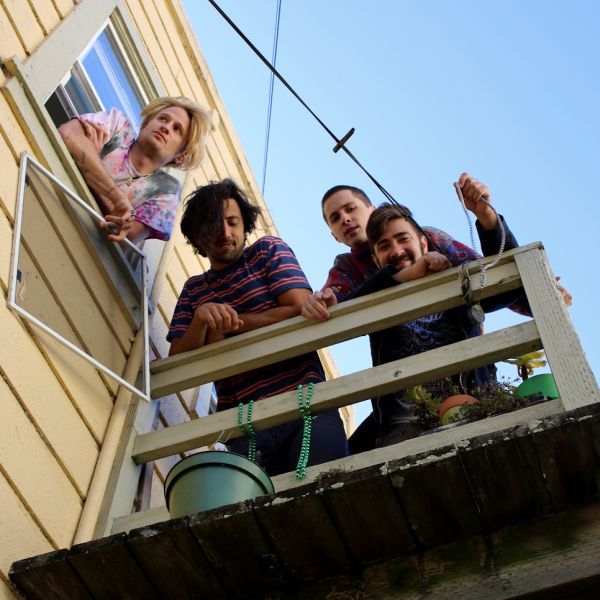 Oakland indie rock band The Band Ice Cream are, y’know, real casual an’ all, but they also put out really cool ‘n’ catchy tunes, including the, ahem…, love song of sorts, “Your Guy” (Okay, let’s just call it mucho enthusiastic, unbridled lust). And they even got together to put out a rad video for the track that will make you rethink where ice cream comes from, and give you pause (but only for a millisecond) the next time you eat that sweet treat!

Rebel Noise is pleased as punch - No, pleased as ice cream, to premiere the way freaky-fun video for “Your Guy.”

In the video, two totally compelling storylines unfold simultaneously; one with a skater dude on the city streets, and the other about a bunch of hungover housemates waking up late in the day on the couch, covered with snack and candy wrappers from the previous night’s obviously wild party.

Betcha can guess yesterday’s stimulating pre-soirée convo: “Ooh, let’s get wasted on compressed, flavored potato flakes and little, round chocolates that don’t melt in your hands!!” (Sorry, trying not to promote any specific brand names, since they won’t be paying for placement.) Oh, wait, there’s some beer cans mingled among the posh nosh, so, y’know, it was a real swing-from-the-chandeliers-type party.

Anyway, to make a long, convoluted plot synopsis short, against the song background of angular, but melodic slacker rock and the vocalist’s bright-eyed and bushy-tailed exclamations, the skater dude finds and ingests some pills (Dude, don’t pick up random meds off the street!), falls off his skateboard clumsily, and lumbers around the city outskirts in a zombified state.

Okay, sorry, this definitely isn’t getting any shorter… So anyway, the skater dude, now known as zombie dude, is colored a Squidward shade of blue-gray, to the surprised (Or is that horrified?) looks of unsuspecting, real passersby.

On the other end of the plotlines-that-shall-converge, zombie dude is having a tough time of it, shaking, rattling, ‘n’ rolling like he’s about to get censored and kicked off American Bandstand in the 1950s. And then - Good gad, the dude melts away… (Duuude!!!), leaving behind a pile of flesh-colored gunk (and an eyeball, if you must have all the freaky-deaky details, and that would be the #2 definition of the term at Urban Dictionary; not #1 or #3 - #7).

So, then guess who drives up to the shocking scene, but a 1950s malt shop-attired ice cream man-with-a-plan. …And guess who’s throwing an ice cream extravaganza and is waiting for the actual ice cream? If you haven’t figured out the grody-to-the-max ending of this video, then you must be a numbskull!

Speaking of which, The Band Ice Cream are planning to release their yummy second album, Numbskull, on August 17th via Urban Scandal Records.  Nice segue, right?

The Band Ice Cream are also kicking off a tour on August 5th that runs through their ice cream party - No, sorry!, their album release show on August 30th at Rickshaw Stop in San Francisco, CA.

And here’s the yada yada yada part for completists: The Band Ice Cream’s tasty debut album, Classically Trained, bowed before the public only last year and charted in both North America and Europe (What, no love from Middle-earth or Westeros?).  The band has toured extensively and received praise from really well-known, they-who-must-not-be-named music sites.

So do yourself a favor, and pick the 32nd flavor, the self-described “dairy rock” / “melting pop” (No joke!  It says so on their Facebook profile!) of The Band Ice Cream.

ALL HAIL THE HALFTONE