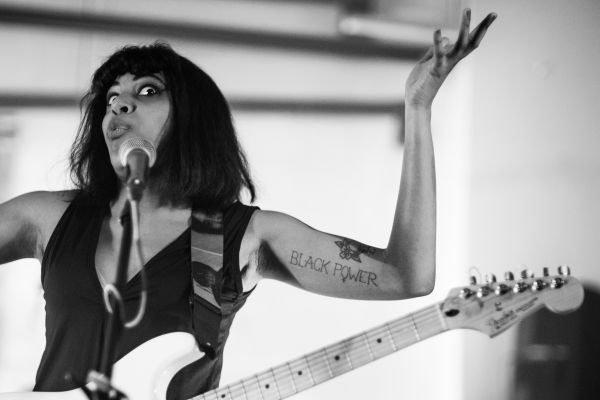 Twin siblings Eva (vocals, guitar) and Cedric Walker (drums) formed The Black Tones in 2011 and quickly enlisted Robby Little on bass.  The Walker’s background of New Orleans origins and a Seattle upbringing have informed their dynamic and relevant sound and lyrics.

Known for the explosive live shows, The Black Tones has been hailed as a buzz band throughout Seattle, from the Capitol Hill Block Party music fest and influential radio stations KEXP and The End to blogs like The Stranger and YouTube’s Band In Seattle.  And the reverberations continue throughout the land and beyond with internationally acclaimed Afropunk and NYC’s veteran indie music site The Big Takeover featuring the band’s potent take on traditional rock ‘n’ roll, blues, and funk.

The Black Tones are currently finishing up their debut EP, which is being recorded by the renowned Jack Endino (Nirvana, Soundgarden, L7, Flipper) and is set for release this fall.  It will bow as a self-release on the group’s own imprint, Reptar Records.

One of the songs on the EP is the sonically simmering and lyrically broiling “The Key of Black (They Want us Dead)”, which Rebel Noise is proud to premiere. Most of the tune is a coolly hot instrumental strut that features all three members at a controlled boil, with Eva’s Wah-Wah pedal occasionally breaking out in funky fashion.

As Eva explains, “It’s a bold statement, but also a true one for the hate groups that still exist… Lives are being threatened and lost in 2018 based on race, gender, sexual orientation, etc. and the problem is that the hateful and ignorant supremacists want us dead. The song is simply stating a fact.”