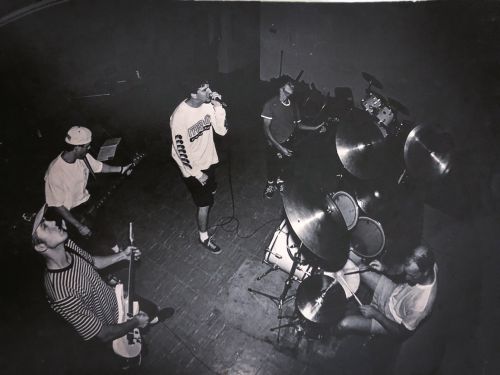 On December 13th Steadfast Records, who truly live up to their name, will be releasing previously unreleased recordings from legendary Long Beach, CA-located hardcore band Focused. The raw and raging tracks were originally recorded in 1993 and will now see the light of day as the compilation album At Eternity’s Gate.

Official news: “The effort is comprised of six previously unheard early recordings made in 1993 by the legendary Southern California band who coined the term "spirit-filled hardcore.”

Listen to “Perfect Will”:

Renowned Italian noise rock duo OvO will return with their ninth studio album, Miasma, on February 7th of next year via Artoffact Records. They will also be celebrating their 20th anniversary as a band, delivering uncompromising, formidable music that transcends simplistic stylistic categories.

Official news: “OvO is a singular force in the underground. With a mix of electronic and acoustic instruments, founding members Stefania Pedretti and Bruno Dorella take influence from the likes of Swans and Diamanda Galas, pounding out a theatrical and harrowing mix… Always on tour, OvO's fiercely independent ethos and grinding live schedule have earned the band a rep as "the Jucifer of Europe," with a worldwide fanbase expecting nothing but the most daring and innovative music.”

“Featuring guest appearances by members of Årabrot, The Soft Moon, Gnučči, and more, Miasma sees OvO continue down its path, mixing tribalism and futurism by way of radical cross-contaminations of sounds, rhythms, and genres.”

Legendary Japanese harsh noise-master Kazuyuki Kishino has unleashed his next extreme masterpiece as KK Null. The Great Attractor 7” is made up of two ear-splitting tracks, out via SoCal-based Ratskin Records.

Official news: “Great Attractor pulls from numerous compositional and sonic strategies, including Japanese harsh noise, “high-speed” industrial, dance music, free-jazz and musique concrete. Throughout the sixty-minute journey, NULL creates a mirror-world look into the unknown; a post-apocalyptic sonic  journey into the epicenter of an erupting volcano… NULL has channeled both the nuances and chaos of the void, compressing it into a near hour-long cinematic representation of the darkness and psychedelic breath of outer space.”

NYC-based pop-rock artist Danny Blu slays on a killer video for his super-catchy new tune “Bubble” (with wicked lyrics like, “Turn this fucked-up world / even more upside down.”) Blu is also the frontman for glam-pop band Echo Black. The video for “Bubble” is all about death and sex (or vice versa) and revels in vivid and potent imagery. The track is pure infectious dance-pop spiked with the dark forces of industrial and rock.

Official news: “[Blu] is a pop-obsessed LGBTQ+ artist influenced by the Goth, industrial, and darkwave movements and most heavily by the alt rock scene of the late ‘90s. [He’s] a proponent of the #stigmafree movement.”

German alternative/Goth rock heavyweights MONO INC. will be releasing their 11th studio album, The Book of Fire, on January 24th via SPV / NoCut and ADA / Entertainment One. The LP follows up Welcome to Hell, which came out last July. The band, composed of Martin Engler (vocals), Katha Mia (drums), Carl Fornia (guitars) and Manuel Antoni (bass), formed in 2000 and is based in Hamburg.

Official news: On The Book of Fire, “[The] massive Euro-charting band is inspired by centuries’ old lore and tragedies.” The LP delivers “a saga of blazing flames, rigorous persecution, and bloody torture. [during the Medieval Inquisition].”

Pre-order The Book of Fire and check Tour Dates: http://mono-inc.com/

Listen to clips from the LP: