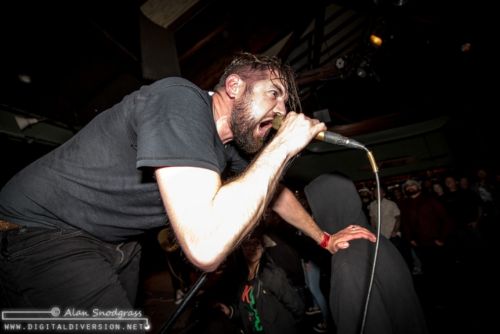 Frail Bray follows up a string of other releases from Western Addiction. All the lyrics and music were written by Jason Hall, but every member of the group contributed to the final product (Hall on vocals, Ken Yamazaki on guitar, Tony Teixeira on guitar, Mitch Paglia on bass, and Chad Williams on drums).

The LP was recorded in late 2019 live to tape at the Atomic Garden in Oakland, California, and was engineered, mixed, and mastered by the renowned Jack Shirley (Deafheaven, Gouge Away, Bosse-de-Nage).

Hard-hitting sonics and passionate vocals are buoyed by lyrical themes that focus on overcoming various challenges that life throws down (loss of loved ones, depression, anxiety, capitalism, crime).

Hall generously took some time out to create a Spotify Playlist of tracks that influenced the creation of Frail Bray.

Hall reveals, “This is a playlist of songs that influenced our new record, Frail Bray. Some you can obviously hear in our sound, and others in spirit. Our goal was to make a big, bright, modern, hardcore punk, rock and roll record. Think AC/DC + Poison Idea.

You will see a mix of styles including classic country, black metal, hardcore punk, big rock, traditional metal, ‘80s, folk, etc. We take all of these styles and run them through the grinder.

I think the through line for this record, for the most part, was a conscious effort to interject melody, cloaked in ferociousness. That’s why you see masters of melody like Paul Simon, Rhett Miller, Stuart Murdoch, Tom Petty, etc.

We tried our best to run lightning up your spine and make you cry, which I believe is the physiological response to a great song. The lead up to the release was very stressful and I’m pretty sure I had a mental breakdown because I collapsed while running.

I associate this scare with the ominous beginning of “Hammer to the Skull” by Wolfbrigade. I’m pretty sure it was playing while I laid in the road in the dark. It sounds like wolves are chasing you through a forest in Sweden!"