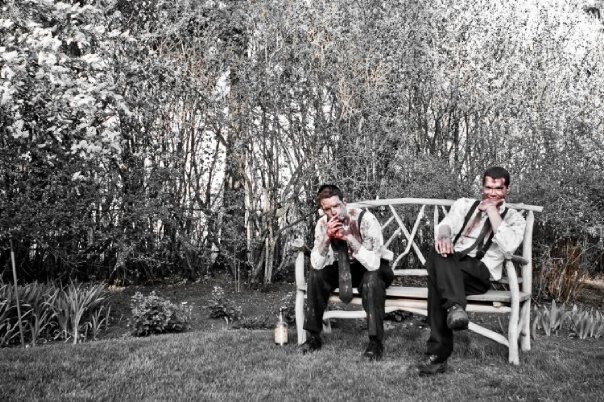 Hello Steve!  It’s so good to have the chance to find out more about you and your music.  While I know some of your musical backstory, I’m cloudy about what the future holds for The Unravelling.  You released the single, “Revolt”, in April, but is there also a new album in the works?

Hi Jen, nice to meet you! We’re very happy with how the “Revolt” single is being received, but yes, there is a new album in the works. We’re already 4 songs in, and I have recently relocated to Airdrie/Calgary so I can be close to Gus during the recording process. It also means we can create much more, as our intent in 2015/2016 is to release a ton of singles. We’re also planning on more than one album. Music videos are on the way too, and they’ll certainly follow our new visual approach.

It’s all very exciting and very much about the purity of the creation process. Lots of music, essentially.

You released your debut rock/industrial/metal/experimental concept album, 13 Arcane Hymns, in 2010 to great critical acclaim.  From what I understand, the music you’re creating now will be more in a cinematic and industrial vein.  What will you be stripping away, or changing about, your previous sound?

Yes, this naturally happened through Gus’s recent years of honing his production skills as well as working on video game soundtrack and film soundtrack projects. After listening to a lot of his recent work, I found it liberating. We realized that we didn’t need to adhere to the limitations that, say, a band would. We’re more interested in doing something different and something that excites us artistically.

So, there will be a lot more cinematic elements, less riffs and live drums…more stripped down is a good way to put it generally. We’re focused on the story…reaching out and really communicating with the listener; the opposite of an overly technically busy band, all competing with each other for attention, which is what most heavy bands are these days.

“Revolt” is quite striking, dark, and menacing.  Is this the template that you’re building your other songs upon?

Thank you. Yes, for the most part, although each song will be quite different. We have a few different modes we go into, and some of them are no nonsense/menacing. Some are more neutral and contemplative.

When we went into this album, though, it was time to let ourselves go completely. We’re not trying to get on the radio. We’re focused on putting everything we have access to energetically, consciously and subconsciously, into this music. Letting yourself go isn’t something I hear a lot in modern music; I hear a lot of planning and posturing. So, that’s really what we want to do, and it can be interpreted in many different ways.

Steve, you’ve battled with and recovered from (thank goodness!) cancer in 2011 and The Unravelling went on hiatus during this time.  Was it always on your mind to restart work with Gustavo as soon as you were able to?

I went into a space where I lost all identity as I went through the surgeries and recoveries. I didn’t consciously think that I would get back into music; I felt it necessary at the time to let go of anything I had ever identified with. After the surgeries I drifted for a few years. I didn’t write or play much. I wanted to, but the drifting needed to happen. In early 2014 I started writing again after touching base with Gustavo. It was really a free flow from there. His enthusiasm helped fan the flames as well.

Gustavo released a solo album, Volume 1, in early 2014.  Does the music on that album have any sonic or thematic ties to The Unravelling?

Yes, several of the tracks on that album are instrumental versions of material from 13 Arcane Hymns as well as unreleased material intended for The Unravelling. Volume 1 is basically a compilation album of some of Gustavo’s favorite creations. So, it has the flow of an album and a compilation at once.

Later in 2014 you reunited as a musical duo and now you have released “Revolt”.  Can you unravel the theme details of the song and why it’s important to you?  The lyrics are bleak, but I think there’s an overall positive message.

Yes, you’re right in that it’s both bleak and positive. The song is about negation and awakening. When you find the commercial is being untruthful, you no longer pay attention to it. The lie holds no more weight. So, a lot of the lyrics in the song are metaphorical, but they’re about dropping the lies we hold dear, whether they’re our opinions about ourselves, society’s customs and traditions, religious or spiritual assumptions, anything that was previously a comfort but not really true.

It can sound negative when we do that, but once you’ve shed all those skins, what should be left is clarity, not depression. With clarity comes the awakening, which is described at the end of the song. I also really like, though, how everyone seems to get their own meaning from the lyrics. In fact, I purposely write that way, so that lines may have multiple meanings.

Who designed the artwork for “Revolt”?  The design is very intricate and interesting.  I see trees, insect and bat wings, human skulls, DNA helices, the Earth, as well as an electronic circuit board.  What is the meaning behind this imagery?

Shaun Friesen of Free Zen Design designed all the artwork. He’s a visionary artist who incorporates both the metaphysical and the physical in his work, from ecology, activism, and social bonding to meditation, self-enquiry and human evolution in the largest sense. The logo with the skulls and insect wings is called “Arcane Priests”. To me it represents the beauty and eternal quality of the life/death cycle, although it’s going to be different for everyone! You can find out more about Shaun and his work at freezen.ca.

What bands/singers inspire you?  Since you are moving in a cinematic direction on future work, what films have influenced your sonic outlook?

We’re both big fans of Dead Can Dance, Tool, Nirvana, etc...; Skinny Puppy for their live show and artistic approach. I personally love artists like Layne Staley, Tom Waits, Kurt Cobain, and PJ Harvey. Gustavo enjoys everything from science fiction to fantasy and horror, but I think it’s the soundtracks or cinematic musical style that inspires him more than the visuals. 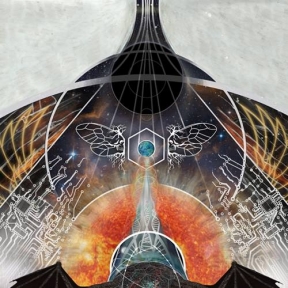