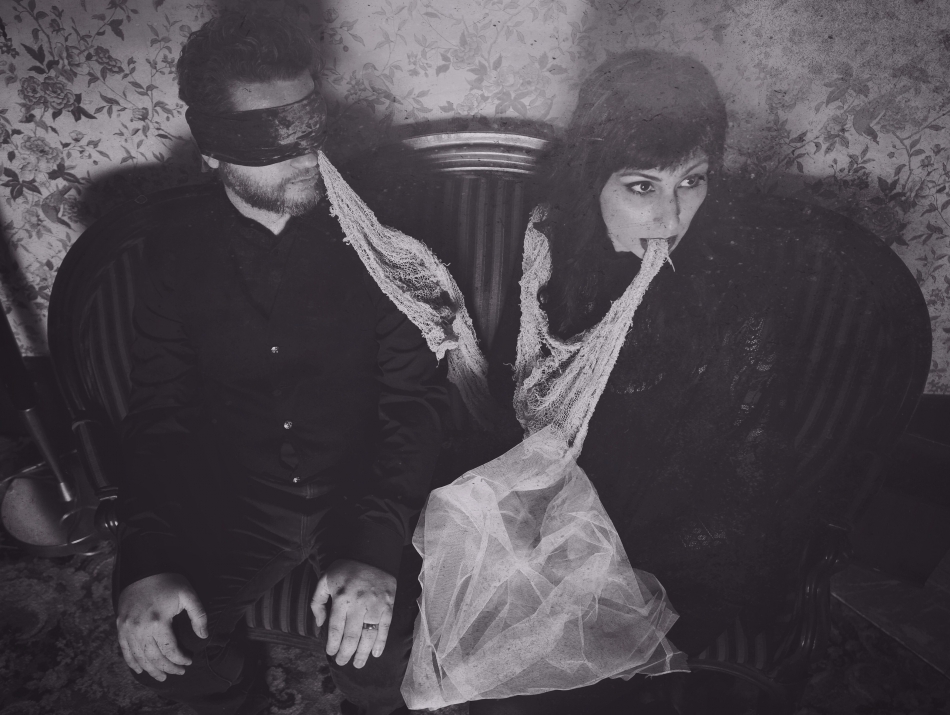 San Diego residents Jeffrey Cesare and Candice Renee clash the most temperate city in the world with their affinity for ominous tones and tension-ridden textures in Blood Ponies. Their greatly awaited full length debut for Hoax is out today, combining post punk and doom melodies in cohesive fashion. For near the entirety of their relationship, Jeff had been performing in other bands while Candice took up drums as her own creative outlet. After a series of drummers fluctuating and eventually leaving the band, the two decided to start making music together. “Once we started jamming and writing songs together it just immediately clicked so easily that it really made me confident right away that this was something I wanted to pursue”, Candice states. Their first live show fell on Halloween night as they performed a Cure cover set before delving into their original tracks. “It was a way for me to get comfortable performing in front of other people, and once I knew I could do that I was ready to jump in more aggressively”, chimes Candice. Operating as a duo, both musicians had no issue setting ground rules when it came to deciding what songs worked for them and which ones didn’t, crafting strong and coherent ideas and open communication for how they imagined Blood Ponies and their songwriting to function. “There was one song last year we were working on for months and months”, remembers Jeff. “Finally we got to the end where after laboring over it for however long, Candice said ‘you know what? It’s not us [and] it’s not what we should sound like.’ Honestly, I had to step back and take a look at the whole picture. Once she pointed [that] out, it made perfect sense. This song wasn’t us. I think that should have been a clue that if it was really that much trouble to stick together one three minute song then we should have dropped it a long time ago.”

Self-releasing their album and committed to handling all facets of Hoax, Jeff and Candice comment on the fulfillment as well as the struggles of working DIY. “It’s definitely a challenge when you’re doing everything yourself. Jeff and I have other full time things we devote our time to, it’s like having two full time jobs. But when you care about something as much as we have with this record, it works itself out. You just find a way to make it work”, states Candice. Oftentimes there were deadlines and aspects of the music industry that were beyond their control, like being at the mercy of the pressing plant’s schedule which can incur a lot of emotional baggage. On top of their exceptional amount of dedication, striving to pay their bills as a full time musician isn’t always the reality. “It’s really difficult to make a living as a musician”, says Jeff, who also keeps his hands busy as the editor in chief of Treble and works as a freelance writer. “All of our friends that are musicians have full time jobs […] It’s tough to hear that. You have to do it because you love doing it. That’s definitely why we do it, we have so much fun doing playing music. But it always gets better and better. at the end of the day when we hear the record that we finished and it sounds even better than we imagined it could, we feel like we’ve done something right.”

Honing in to their primal and darker senses, both Jeff and Candice are deeply influenced by horror films as well as macabre locations they find during their joint travels. Their affinity for classic post punk acts like Nick Cave and the Bad Seeds and Killing Joke run deep, but they are also drawn towards newer bands and cite Daughters latest record You Won’t Get What You Want as a recent favorite and a band willing to go into more intriguing and heavier spaces not bound by genre. Says Jeff of his writing, “a lot of lyrics will start with a strange American myth, something having to do with the supernatural or weird disappearances or serial killers. The songs aren’t about that persay, but that weird element of stories that are stranger than fiction, because there’s not really an easy explanation for them.” Their latest single, “Submit/Surrender”, was inspired by Shirley Jackson’s short story The Lottery and how the most seemingly ordinary person can be capable of severe cruelty. Creating tension and crafting a space for the unknown in their tracks as well as into their visual aesthetics is a driving force they channel into their project. Rather than spoon-feed their listeners with a concrete message, they are always interested in what their audience pulls and takes away from their songs. Recalling urban tales like Jack the Ripper and how legends and stories morph over time, both Candice and Jeff pursue and contend to their music as a living, breathing entity, capable of change and reading into unique perspectives depending on one’s experience.

Citing San Diego’s small urban core as intimate when it comes to the local music scene, the two seemed relieved with living in a city that’s less obsessed with show biz and more driven by raw talent and and a warmer environment. “There’s not a rush of people looking to get signed to a major record label, if that even happens anymore”, laughs Jeff. Commenting on the trend of recent artists in the darkwave and electronic realm as well as a strong connection between bands based in San Diego and Tijuana, both Jeff and Candice are enthused about the energy and connections their city brings to them in their current creative climate. For those of you residing in San Diego you can attend their album release party tomorrow at Vinyl Junkies Record Shack with a lineup consisting of an art showcase, fortune teller and DJ sets. You can also purchase their record Hoax today on their Bandcamp page.