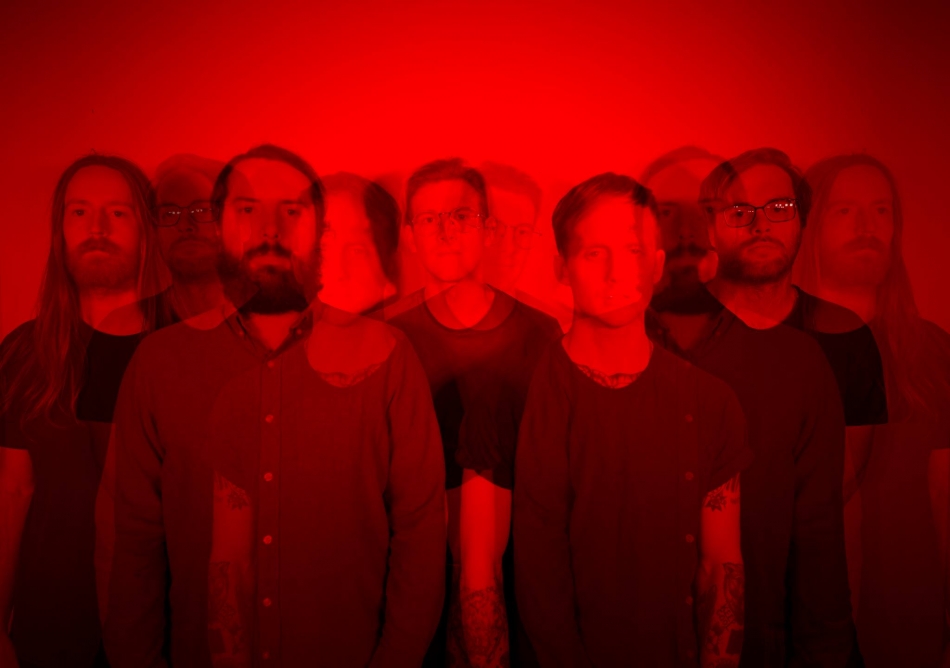 British Columbia's Fraser Valley act Blessed removes any notion of redundancy from their musical vocabulary. Formed in the winter of 2015, the five-piece has since honed in on their remarkable ingenuity, infusing aspects of kraut-rock and post-punk from their hardcore background to commit to finely attuned melodies. Never crossing over into monotonous layers, Blessed has an inherent knack for juxtaposing shifting, chaotic explorations into territory that remains full of intent and intelligently structured. With the release of their full length album Salt on April 5th, each track morphs and pulses with their own independent trajectories, providing their audience with a most rewarding experience and an insistance for multiple plays. Embarking on an emcompassing North American tour, we had the chance to interview Drew Riekman about life on the road, their close knit music community and the extensions that DIY lends itself to in the music realm.

Rebel Noise: Congratulations on your release shows in British Columbia! How did your shows in Vancouver and Abbotsford go?

Drew Riekman: Ahh, thank you so much. Release shows carry a certain weight and connotation that feel like a great snapshot in time. I was saying to a couple friends at those shows about how releasing your first record and the environment around it at release shows in your hometown feel like they’ll be the best shows you play all year. Not so much to do with your own record, but more so that your friends come out of the woodwork, and we were able to curate most of our favorite locals in both cities to play with us which was amazing. More than anything, it feels celebratory of the entire community that we’ve been able to exist in.

RN: Would you consider the Fraser Valley and/or Vancouver local music scene accessible? How has it changed in the last four years since Blessed formed?

DR: I think it depends on how you are defining accessible. Unfortunately we’ve had to fight tooth and nail to have any sort of space representing live music, which means that you don’t always have the most illustrious spaces at your disposal. I could never blame someone for not wanting to see a show in a garage with a leaking roof, but when you’re living in a town that actively fights having spaces for niche or outsider art, your choices are often limited for where it can be publicly displayed. I think there’s a lot of work and development to be done, and listening that needs to be done to people who are better equipped to make the scene more accessible moving forward. I don’t believe it’s our place as Blessed to make the judgement calls as much as support and encourage younger and more marginalized groups in their endeavours. At the same time, I think as time moves on and we see new people enter and exit, more than ever I think Abbotsford is a city for transition - when certain people have been trying for over a decade to encourage and support new art, and it’s never met excitement from the people with power to change things, I can’t fault anyone for wanting to move away to a city with better resources and support. It’s become a trope to say that if the people in Abbotsford who are involved in art moved to a bigger city, they’d be leagues ahead of where they are now professionally. But as long as we’re there and our friends are there, we’re always trying to make strides to improve upon the scene that we grew up in.

RN: You make a conscious effort to elevate and highlight a lot of the burgeoning creativity and artists living in your hometown. What bands can your audience keep on their musical radar?

DR: There’s so many right now. Warm Amps, Loans, Sylvia Platters, but honestly if I have to highlight one person specifically there’s an artist named Kristin Witko who’s recently started performing in the Valley/Vancouver area and to say I’m excited for their first record to come out would be a major understatement. It reminds me of a bizarro Abba mixed with moments of my favourite Bowie and Fleetwood Mac tracks.

RN: You emphasize the importance of the freedom and independence associated with the DIY music culture as well as now working with more music industry related figures. Where do you draw the line, or how do you balance the two?

DR: It’s hard to quantify, especially seeing as we’re still growing and learning how we want to operate in that world ourselves. I don’t know that there will ever be a time when we could write the guide on how to manage those two worlds, especially seeing as how they both shift independently of each other and often. The band was built independently and a lot of the satisfaction that comes from playing music, also comes from being welcomed into other scenes and being able to help people come through your area when the time is needed. At the same time, I think DIY gets railroaded and mistaken for the idea of “accept help from no one” and that doesn’t seem like a fair case to be made. The community of DIY and what it means to us, especially with Canada’s community being so insular and having a certain degree of “everyone knows everyone” means that despite everyone’s growth; and we’ve been lucky to see some of our friends have exponential growth, there’s always an element of being able to email each other or sit down if you’re in the same city and seek advice and help from your peers and those around you. This is the case even if some of those peers have moved onto playing much larger rooms, there’s a certain element that doesn’t seem to get lost in that growth when it comes to bands that started their journey playing basements and DIY spaces together. There feels like space to occupy both worlds in a responsible way but I don’t have the language and experience to quantify it.

RN: How did your SXSW showcases go this past March? What are your thoughts on SXSW as a whole?

DR: SXSW is such a large spectre that hangs over every band in some capacity, and everyone has an opinion about it that they aren’t afraid to share. I think a big piece of the puzzle to enjoying it, is having highly managed expectations. I think managed expectations helps in every pathway of participating in the quote unquote music industry, however you define it for yourself. But SXSW seems to magnify what bands want from it. At the end of the day, it’s a massive multi-media conglomerate that arguably has nil care for whatever your band is doing to participate with it. As such, going into it with the idea that we’ll be in Austin with sometimes as high as 30 bands we know personally, and we’ll all be running into each other, trying to catch each others sets; that seems to make it a more manageable/fun experience. The communal aspect and what happens outside the official festival are much more conducive to enjoyment.

RN: What is your dynamic like while traveling together as a band? What do members do to aid in down time?

DR: There’s been a transition in the recent years from how we’ve operated in the van. The majority of us have quit drinking since early 2018 and we’ve now spent nearly a full year of time together on tour when you add it up, which is a lot of time to be cramped in the space we have. Most of us at this point enjoy putting our own headphones in using van time as personal time as much as possible. There isn’t much communal listening or chatting comparatively to our first tours, but that feels like more of a facet of time passed than anything else. We’ve instilled some measures to make sure we still talk and share with each other to make sure everyone is on the same page and act as a de facto support group for each other as much as possible. A lot of time once we’re in cities is spent hopefully relaxing at friends places and catching up, or walking around. We still have an interest in making sure we take advantage of being in places with new options for coffee/restaurants/etc compared to when we’re home.

RN: As you're embarking on your two month tour, what cities and towns are you looking forward to visiting and playing at for the first time?

DR: At this point there aren’t too many cities that we’ll be moving through that we haven’t already at some point. I don’t know that cities stick out so much as certain friends and bands that we’ll be seeing again. We took a very large chunk of 2018 off to get prepared for touring the full length this year, which means it’s been more than a year since we’ve seen a lot of west coast friends and friends in the south. I know we’re making a conscious effort to try and make it through Lockhart, TX to stop by our friends who just opened a new record shop called Bluebonnet Records.

Blessed will be on tour for the remainder of May and into early June where you can catch them in the following cities: 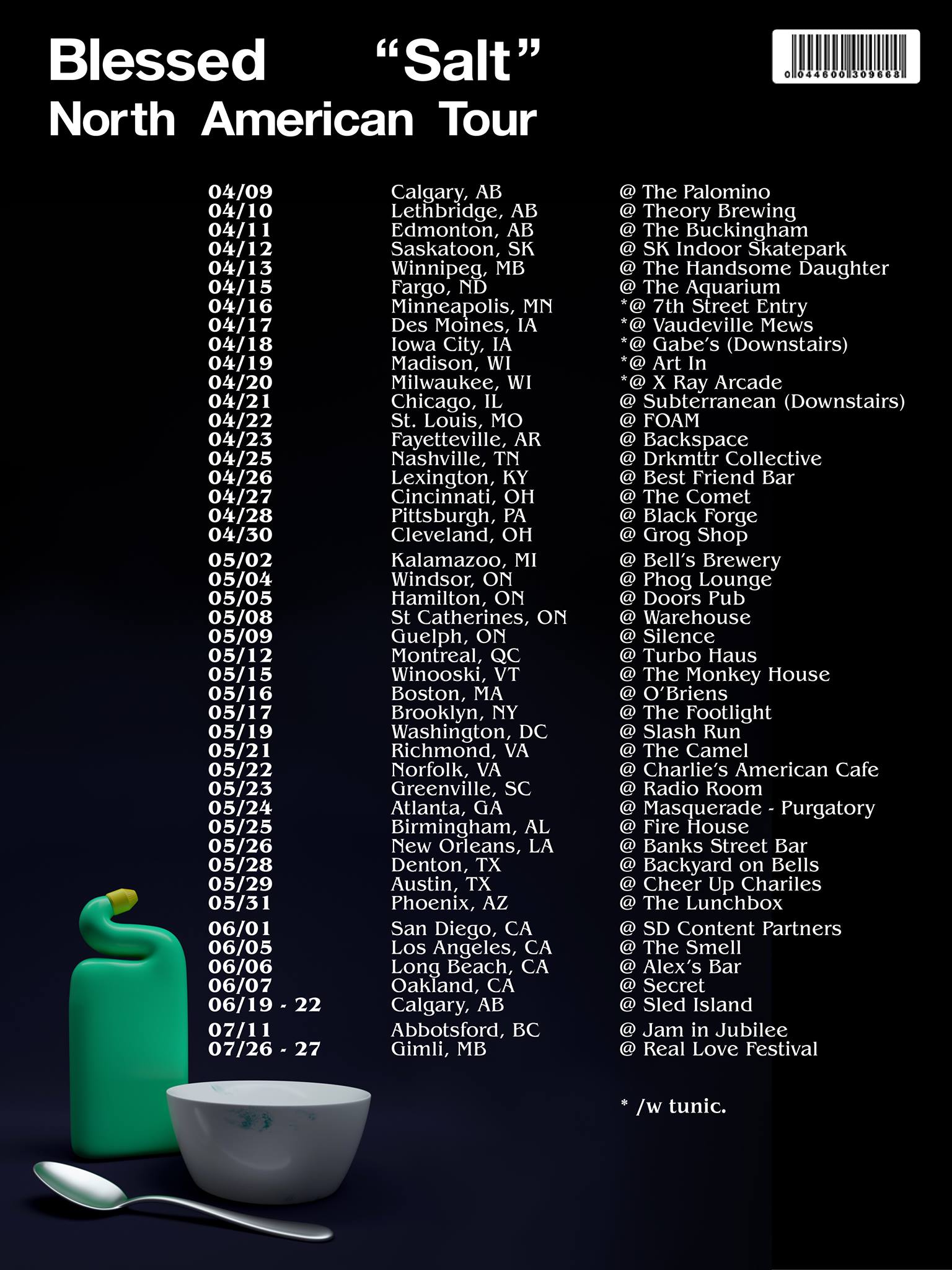