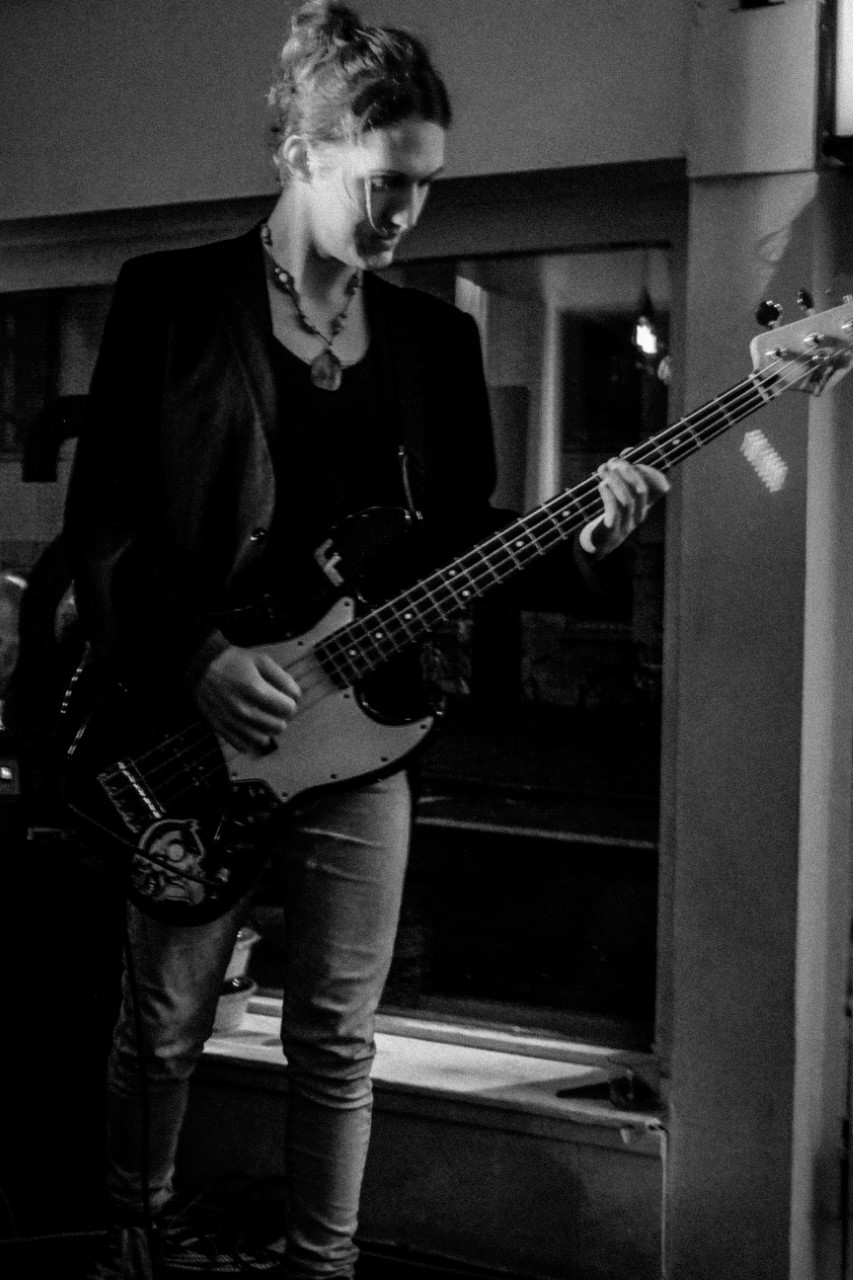 Interview with Jodi M Burn, a musician, educator and organiser based in Bolton, Greater Manchester. They teach guitar, bass, and drums and run workshops to encourage complete beginners from marginalised communities to start playing music. They also play bass and drums in several bands including Colour Me Wednesday, BYENARY and Personal Best.

I've researched your career, thus far, and it's clear you are involved in a lot of projects, from playing in bands to organising a yearly festival, can you tell us about each of them?

Ok, I'll keep this as short as I can because I know there's plenty more questions coming!

As a musician, I've been playing the drums for almost 20 years now and professionally for around 8 years. I've done various session work and played in bands as diverse as The Amazing Devil and Neil Singh (folk), F.L.O.S.S. (an all-trans hardcore punk cover band) and Colour Me Wednesday (indie/pop). I've also released a solo EP under the name Peanut Butler and more recently a synthpunk EP with DIY band Andromache where I played synth.

As an educator, I've been teaching drums, bass and guitar since 2015, 1-1 and to groups, which I'm still currently doing online so get in touch if you're interested in learning! I've also given workshops and coached bands with First Timers Fest and Girls Rock London.

As an event organiser, I coordinated the whole season of First Timers Fest workshops from 2017-2019, was a co-organiser of a one-day festival called Synth Punk Fest at DIY Space for London for 3 years and have organised numerous other DIY shows in London and Brighton for bands such as Big Joanie and Petrol Girls. I'm also currently the International Representative for Girls Rock London!

In August 2019, you went to the Music Empowerment Exchange Project in Iceland. Can you tell us about this experience and what you feel you got out of it?

Wow! You have done your research! The Music Empowerment Mobility & Exchange (MEME) project was a week-long music camp for 60 young people (girls, women, trans and gender non-conforming people) and 30 volunteers who came together from 11 different Girls Rock Camps across Europe. We spent the week learning about music, photography, social media, filmmaking, event organisation and social justice issues and put on a gig with all the newly formed bands at the end of the week!

I got so much out of this experience! Firstly, I got to teach something OTHER than music during the camp: event organisation! It was a VERY different experience for me so I'm very glad I was given the chance to do it. I also got to connect with the incredible international Girls Rock Camp community and can confirm that they're all a massive bunch of babes! I think that Girls Rock Camps, with their conscientious youth work approach to not just teaching music, but also to social justice means it attracts a certain kind of person so it was amazing to meet so many like-minded people from such different places and immediately feel like a team. I definitely met some incredible allies, friends and comrades during that week, and look forward to getting more involved in the Girls Rock Camp international community!

I also got to spend a lot of time with adorable Icelandic ponies so that was definitely a plus!

Please can you tell me about the history and ethos of First Timers festival?

I'd love to! First Timers Fest is a project that organises a season of music workshops aimed specifically at people who have never played an instrument before. We have workshops in guitar, bass, drums, vocals, keyboard as well as more general skills like songwriting, performance anxiety and home recording. As well as the workshops we host a festival where every band plays it's first ever gig! The criteria to sign up to play are that you need to have at least one member of your band who has never played an instrument before or has never played the specific instrument they'll be playing. We have a clear focus on wanting to encourage people who have more barriers between them and music-making, which we have identified as including women, queer/LGBTQIA+ people, disabled people and people of colour. Therefore every band HAS to include at least one member who identifies with or has experience of one of these things. The idea is that this isn't exclusive to anyone else, but just specifically encouraging those who might need a bit of extra support in feeling confident in musical spaces. If you're interested then find out more at the website www.firsttimers.org!

What are safe spaces and why are they important to the LGBT community?

It's really hard to define exactly what a safe space is because they're going to look very different for different people. It's also nigh on impossible to guarantee that any space would be 100% safe. The need for them, at least for queer/LGBTQIA+ people, has come from the higher rates of discrimination, harassment and prejudice individuals from the queer community experience in public spaces such as bars, clubs, music venues and mainstream community events. A 'Safe(r) Spaces Policy' or 'Accountability Agreement' that visibly states that discriminatory behaviour or harassment won't be tolerated will hopefully help people to feel safer in that space, and also more confident to report any behaviour that makes them feel uncomfortable. A list of unacceptable behaviour, however, is fairly useless on its own unless it's backed up by thorough training and protocol so that staff can respond sensitively and confidently to incidents when they occur. An incredible organisation that does this kind of training is the Good Night Out Campaign so get in touch with them if you work at, or know of, a venue that would benefit from having better standards of care to its customers!

What is the main piece of advice you give to your students?

Music is an expression of self. It's an art, not a sport. It's about exploring your thoughts and emotions and conveying your message to other people in the hope that they will find something of value in that. It's not about competition, winning, technical expertise or anything else that the music industry and musical gate-keepers might tell you.

What does music mean to you?

I've come to learn that I'm actually not a very creative person, at least not when left to my own devices, so I always need to give myself an external reason to play music. For me music isn't necessarily the end goal, it's the medium through which I can do my best to empower other people to be their authentic selves and build their confidence. I think that's why i love teaching so much. It's a passion, an experience, a skill that I can share with other people in the hope that they will realise that they can express themselves and don't need permission to make whatever sounds they want to make. Whether it's playing an instrument in a band or speaking out against injustice.

As a non-binary trans musician, I also believe it's important to be a role model when I can and the time when I'm most publicly visible and in the spotlight is when I'm on stage. If seeing me being my unapologetic self playing music onstage is enough to encourage one trans person to express more of who they are, then I've done my job.

What has been your greatest achievement as a musician?

Aside from my teaching work, my greatest personal achievement as a musician is probably when I played a headline show at FEVER in Tokyo, Japan with Colour Me Wednesday to a packed out crowd! To travel to the other side of the world and know that even there people have discovered and connected with your music enough to come and see you play is an incredible feeling!

What five albums should we listen to and why?

Wow! Suggesting whole albums sounds so old school now! I held on to being a proud 'albums only' music listener for a long time but I'm afraid to say I've now jumped on the Spotify Playlist bandwagon. That said here are a few albums that not only have incredible music, but I've also learnt a lot from over the last few years and have definitely influenced the way I think about and approach life and my interactions with others. I believe they have contributed to me being an overall better person (I hope!)

Feminist post-hardcore of the highest order. Absolutely incredible musicianship from everyone and Ren's lyrics, vocals and stage performance never cease to leave my jaw dropped. She has such a way with words that she can bring everybody together in a room and bring the overall understanding up of issues as broad as immigration, sexual harassment and trans rights.

I may be slightly biased as my band Colour Me Wednesday share a member with The Tuts (Harriet Doveton, my guitarist and their bassist) but nonetheless this album takes such unapologetic stances against the male-dominated music industry, shit boyfriends and harmful right-wing politics. Nadia Javed is an incredible songwriter and frontperson and Bev's drumming is iconic. Top-notch feminist punk-pop anthems!

Again, such an important record for the deeply profound and so clearly articulated messages on race, gender and capitalism, whilst also being humorous and catchy at the same time! I know you asked about albums, but really this band is one to watch live. They are true musicians who don't just replicate their recordings on stage but are always changing them based on how they're feeling in the moment. Each time you hear one of their songs it'll probably be completely different and I love that unpredictability in a live show!

I absolutely fell in love with this band in 2017, partly because I'm REALLY into their soft synth-pop vibes, but also because the album is essentially full of love songs, but instead of being simple tragedies or romances, they explore the grey areas in between. They explore what it means to admit that YOU might be hurting your partner due to your own insecurities or to realise that you're worshipping your partner and the dynamics are unhealthily uneven. Really complex stuff that is perfect for anyone wanting to be more self-aware and emotionally mature in their relationships.

We're all having a hard time right now so I think we all deserve to treat ourselves to some slightly problematic nostalgic regression, so this is mine. I encourage you to pick your own! :D

What is your favourite lyric in a song?

Despite my previous answer, I'm actually really bad at listening to lyrics in songs. Surprisingly perhaps as a musician, I find it hard to learn things that I just listen to so I really need to sit down and read something to properly take it in, and gone are the days when I would put on an album and listen to the whole thing through while reading the CD booklet. But there's definitely a Screaming Toenail lyric from Territorealities that I try to incorporate into my teaching and day-to-day life, which I think many people could learn from if they really took it on board: "Teach yourself to fail, that's how you grow."

If you could change one thing in the world, what would it be?

I think genuine empathy for people who are not like us would go a long way to evening out this very unequal world. And it's something everyone can and should choose to work on.

If you're interested in learning how to play the drums, bass or guitar, either in 1-1 lessons or group workshops (all currently online), contact Jodi at mxjmburn [at] gmail [dot] com