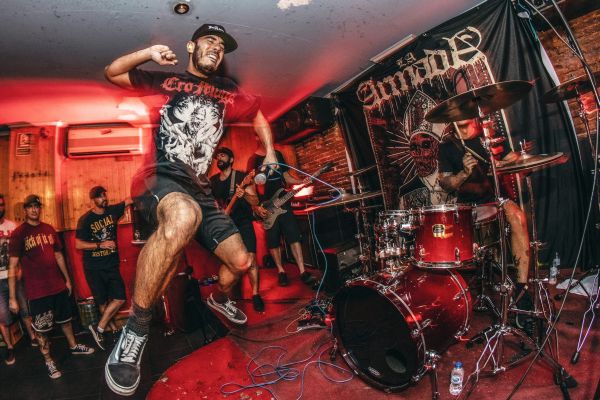 Hardcore/metal outfit La Armada formed in the Dominican Republic in 2001 and helped to build up the hardcore punk scene in their native country in the 2000s.

They then moved to the United States and keep on unleashing their intense music and socio-politically relevant lyrics that pay tribute to their immigrant past and take a political stance that, in their own words, is “decolonizing and anti-fascist [lyrics]… which criticize the politics of both the US and the Dominican Republic.”

Their ‘Songs of the Exiled’ series is a run of digital releases that will bow throughout 2020, with each record, “dedicated to one of the places we were born, or have lived in, that have shaped us and our political [beliefs]”

Band members Paul Rivera and Mani Marte kindly took part in our ongoing Protest Interview series. Caveat: This interview took place right before news broke on the coronavirus pandemic, so this is not addressed below, although it most likely would be if the interview had taken place just a bit later in time.

Hi this is Paul Rivera (guitar) and Mani Marte (bass).

Paul: As far as our sound, at its core, I like to think of La Armada as a punk rocker’s go-to metal band and a metal head’s go-to punk band. As far as our musical vision, we’re not interested in repeating what’s been done, and for us, the way to do that is to add rhythms from our homelands, Dominican Republic and Puerto Rico.

Paul: For me, the destruction of the planet and the treatment of minority communities and those less fortunate. To be more specific, I think all our struggles are tied together. Capitalism may have taken humanity this far (medical advances, technological evolution, etc) but it is clear that we have surpassed the point where it can be considered benevolent, if it ever was.

We are destroying the environment in search of eternal economic growth and in the meantime we are losing our ability to act with compassion towards those at the bottom of the economic totem poll, i.e. refugees, minorities, etc.

Mani: “Unquenchable” – our critique of the for-profit incarceration system.

Paul: To me, the interconnectedness of humanity and our processes is very well put by Carl Sagan’s “Who Speaks for Earth” clip:

Paul: The most recent activity we participated was just last week, when we joined the Dominican community of Chicago in downtown to protest the recently cancelled elections, which detonated a series of demonstrations of solidarity worldwide.

Mani: For the last two years we also carry on tour with us a zine that we put together with the help of two other bands, Thulsa Doom and Disaster Strikes. The sale of every copy goes directly to the ACLU. We’ve been able to announce that, in both the underground circuit and bigger stages and festivals.

It’s easy to judge and criticize others, especially in these unsettling times of overt intolerance, ignorance, and insults, but the fact remains that we need to work to ensure that positive change occurs. Name an action to take, or a campaign/charity that would be worthwhile to contribute to, for your cause.

Mani: I think it’s important to say that as a band, we don’t consider ourselves activists. That would be disrespectful toward the people who, day in, day out, put their boots on the pavement to fight for their particular cause.

We are artists who participate in activists’ movements and use any platform we get to share these messages. We do our part any chance we get and when we do we like to put help directly in the hands of grassroots organizations. Last year we did a fundraiser in NY for Probar of South Texas, who are aiding detainedfamilies on the Southern border:
https://www.americanbar.org/groups/departments_offices/FJE/donate/com-imm/

Paul: To quote George Orwell, “If there’s hope for the future it lies in the proles.” Any little bit of hope comes from the people we meet, whether it’s people at shows, actual activists with boots on the ground, and people involved in grassroots organizations working to make a difference in their particular spaces. That doesn’t mean the picture is looking hopeful at all, but any bit of light comes from the people.

The Art of Dreams: An Interview with Zelma Stone