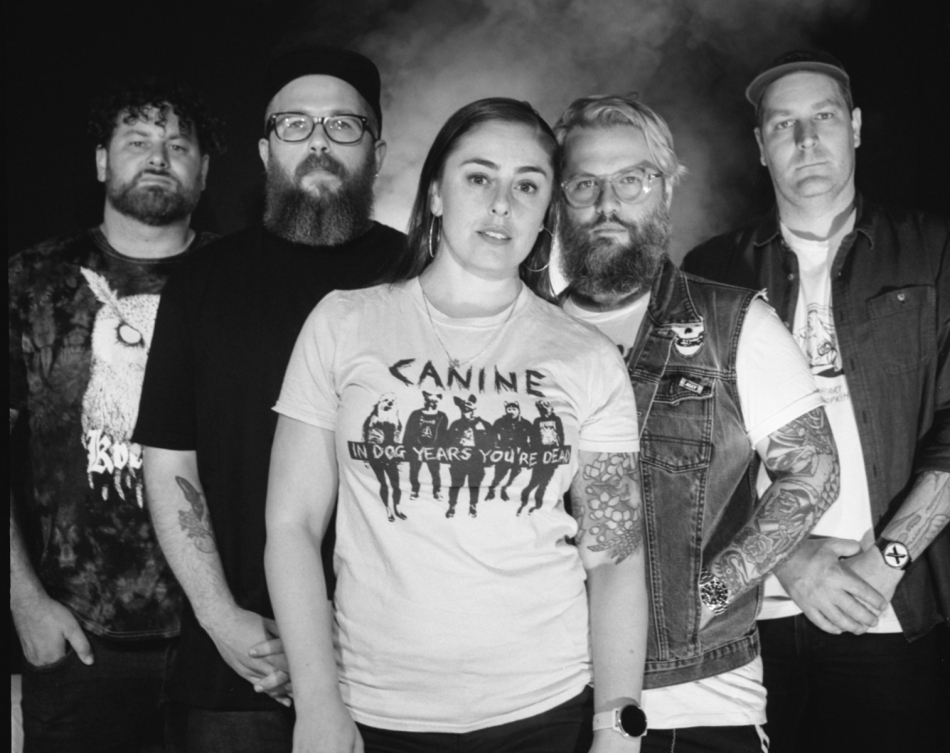 In the lead-up to the hardcore band’s new release, the vocalist shares some of her insights with Rebel Noise

A melodious ferocity runs through the new album by metallic hardcore band Outright. Keep You Warm will be released July 15th through the Australian band’s own label, Rage and Reason Records. Rebel Noise took this release as an opportunity to hear directly from the band’s vocalist, Jelena Goluza.

Rebel Noise: Jelena, thank you for your time! I read that the band formed around 2010. Since then, the band has released a couple of EPs and is about to release its second LP. You have also toured with bands like Propagandhi, Refused, and Rise Against. How has life since 2010 shaped you? How do you think experiences have affected the band and the music?

Jelena Goluza: I think playing in this band has provided a lot of catharsis over the years. Having a voice and the energetic output has enabled us to express a lot of what we’ve been through or feel. While this still comes through in our new music, there’s also more reflection and introspection that comes with having the space to push beyond the urgency to focus on other things.

Musically, and with many line-up changes over the years, we’ve evolved to play a broader range of heavy punk that leans both to metal and melody at times, faster in some songs and much slower in others. It’s nice to stretch our legs. In the past 12 years, we’ve had the opportunity to play anything from small art spaces to enormous arena shows, and we’ve learned to fill each space differently and take our own special memories from them.

RN: How has the experience and work of being in a band changed?

JG: As a band member and our label owner, I’ve definitely experienced the impact of increasing digitisation, and it hurts. Normally, record sales would cover all the costs for production so we can keep doing what we do, but online streaming has taken all that away. There’s also the added burden of having to invest in more video clips just to have that online presence. I mean, it’s fantastic to be creative in more ways and to work with brilliant filmmakers to do that, but the financial pressure is hard to manage.

We’ve noticed time management and touring gets harder as we get older and carry other responsibilities in life, but we wouldn’t take it on if it wasn’t fun and meaningful for us and important to back up what we do in the studio.

RN: The album is remarkably focused—the songwriting and performances keep up a sense of passion and enthusiasm. And I like how the aggression is balanced by guitar melodies. For example, “Truth Teller” has a nice mix of urgency and drama, and I really liked the parts that come at 1:07 on “Tied Through Time” and 2 minutes into “Tyrants Vultures.” Please describe the song-writing process. How do you and the band write songs? What comes first?

JG: Thanks for being so kind. It’s nice when other people pick up the same bits we love in those songs. The riffs come first. Always. Someone will come with an idea, we workshop it together, and then when it finds some form, I’ll write lyrics to match the mood and we go from there, adding layered guitars and backups. I always love seeing what random changes get made at the last minute in the studio, too, just to lift the track some more. We compile a library of ideas, which is really useful for those times when we can resurrect a scrapped idea that ends up being perfect for something else. It was interesting adapting to a virtual song-writing process while our city was in lockdown for many months due to COVID, but I’m proud of how we made it through.

RN: What non-musical works or forms of art and media influence you and the music?

JG: Aboriginal artists like @coffinbirth teach us a lot about the First Nations experience and inspire our solidarity and action. Our song “Tied Through Time” is informed by reflections of the Bringing Them Home report on its 20th anniversary. Forced removals in modern child protection policies are known to cause what is now considered a second stolen generation event among First Nations peoples in Australia, yet Aboriginal people remain the longest-surviving civilisation in the world and should be celebrated.

The song “Silent Spring” is inspired by Rachel Carson's book of the same name published in 1962. It taught us about the environmental impact of pesticides, and we’ve since learned the risk and tragedy when we don’t pay attention to science, even for our own survival.

Our video for “The Hammer” takes the premise from Maleus Maleficarum and flips it with the influence of various films and plays based on the history of witch hunts.

More generally, we’re influenced by intersectional progressive literature and commentators, artists like Weiwei and Haring and political documentaries and podcasts.

RN: What makes you feel good?

JG: Personally, exercise and nature always makes me feel good. I think what makes the band feel good is knowing we’ve tried our best and connected with others who relate to what we do. Everything always comes back to community-building, creativity, and catharsis.

RN: In the US, where I am, news of Australia’s most recent election was largely crowded out by domestic stories and the war in Ukraine. What are your thoughts on Australia’s election?

JG: I think our recent federal election was a clear indication that our national community is rising up and speaking for people and the environment. We’ve seen more seats move away from the conservative party to greens and independents than ever before. People have witnessed the crushing impact and disappointment of conservative governments and become more engaged to set things right. I think there was also a strong backlash against the former government for how poorly it handled sexual assault in Parliament and industry, delayed vaccine roll outs, homophobic and transphobic policies, flood and bushfire prevention and relief, constitutional recognition for First Nations people, and corruption. Women spoke out with their votes louder than ever. Young people spoke out with their votes to make a difference when the older generations never acted on their behalf. It’s been the change we’ve been waiting so long for, and we’re invigorated to hold the new government to account to carry that change through.

RN: What do you think of compulsory voting and Australia’s version of it?

JG: I think there are arguments for and against compulsory voting, but I’m satisfied with my experience of it in Australia. I feel it is the best opportunity to engage and capture the views of a wide population and get as close as possible to the level of representation required to comprise a democracy. Even though we have to deal with preferences, we can still vote to ensure our preferences also lean in the direction we want leadership in. This increases legitimacy and responsiveness more than other electoral systems can. Even though true democracy relies on higher levels of education, compulsory voting is at least a way to engage and inform more people about how policy and power affects them and equalises them in the weight of each vote. Some people think it forces people to vote, but there is nothing stopping someone from lodging a blank paper if they choose to disengage. That said, voting policies aren’t the be-all and end-all. Our entire political system needs to back that up, and its players need to constantly be held to account with transparency and integrity.

The Genealogy of Jethro Tull: An Interview with Ian Anderson