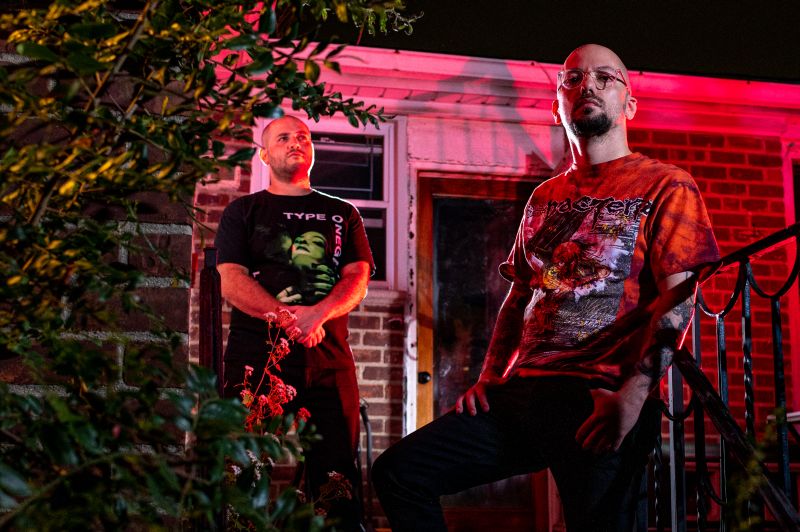 The band operated under the radar in the New York City region for several years, releasing two EPs and a 7” of songs that broke out of the strict boundaries of hardcore music.

Now four years since their last release, and shedding some band members along the way, the duo have pared it down to the essence, unleashing aggressive, yet complex tunes in all their raw intensity and unrest.

Lanza has kindly taken some time to reply to our ongoing Protest Interview series, because there are still deep-seated issues and idiotic/deluded mentality that are still running rampant through the general public…

My name is Andrew Lanza. I play guitar and sing in the band Chain Gang Grave. We’re an unconventional sludgy hardcore band.

Watching damaging conspiracies get openly embraced by large elements of the population, including elected officials, in the USA. Seeing this happen on a more personal level with people I come into contact with, and watching these people slowly divorce themselves from reality. The fact [that] we as a people no longer operate with a shared set of facts when we engage with one another.

The lyrics to our song “Tinfoil Brain Leach” describes the outlook of someone stuck in this conspiratorial mindset: “Everyone a sham, a sheep, or a shill, except for you, the only one with free will.” I offer my assessment of this type of person later in the song: “You’re a moron, a dodgy, dumb fuck – moron.”

I’ll be honest; I’m not sure. I don’t remember this issue being covered, as I feel it’s kind of a very modern one. Of course, I am sure there are some modern bands that make light of this issue; I just don’t listen to them (yet). On second thought, I’m sure something by Born Against fits this bill in some way… I just can’t put my finger on the exact song.

I am woefully under-involved in any sort of real political organizing. I express my viewpoints through my lyrics, but I have only been writing lyrics for a short time. I more often use my visual art to illustrate my qualms with the current state of the world. I engage with friends and family members who have slowly slid to the other side of the political spectrum and have started to give any sort of quarter to loony conspiracy theories.

As hackneyed as it is – go out and vote (blue, naturally). Get these fiends out of office, or keep them out of office.

The younger generation seems to be very involved politically, and many have their priorities in the right place.

We are also on Spotify and other streaming platforms.