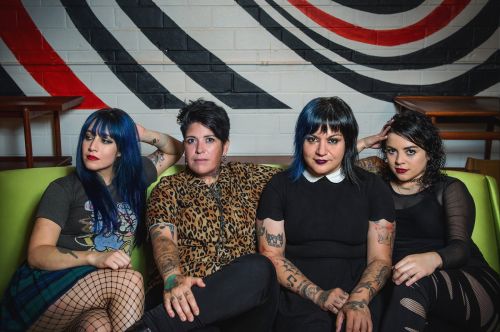 Phanie Diaz, the drummer of San Antonio-based punk rock band Fea pulls no punches about the state of the nation.

They released rousing lead single “Let Me Down,” which targets obsessive social media behavior, this past October and just kicked off a Texas-focused tour to promote their imminently upcoming album.

No Novelties was produced by punk legend Alice Bag and tackles relevant subjects like sexism, toxic relationships, and social media, all from the female point of view. The sound is raw and riotous, yet also tuneful and fun.

Phanie Diaz kindly took some time to answer our ongoing Protest Interview series and replies with her direct and astute views on the state of the nation.

Hola! This is Phanie Diaz, the drummer for Fea.

Right now there are so many issues that have been made worse by the idiot in office. He has made it OK to be a racist homophobic machismo. It’s brought out the worst in our country. The treatment of immigrants. The cages. The treatment against the LGBTQ community. Police brutality and the use of excessive force. It’s heavy.

Honestly, I can’t really choose a song. Our album touches on every subject. From the wage gap in America, to toxic relationships, to touring. There’s a song for every situation.

A favorite quote for the band in general is, “We do this for the history books and not the check books.” I believe we got this from The New York Dolls. Maybe they heard it somewhere else. Making music, touring, and spreading a message is the good fight we are fighting. We are not trying to be some rich musicians. We are four minority women who want to represent the beauty in being yourselves and accepting one another.

We try our best to stay locally involved in our scene. Helping to raise other musicians to represent our culture and city.

If you agree with it or not, we are all human beings and people migrating to this country are doing so to escape danger within their country. We are human beings at the end of the day and we should help each other. Find a charity that is trying to help those crossing. Help the children... As cliché as it sounds, they truly are the next ones to carry this world.

Watching little kids come to the show and get educated about our music and explore from there. Watching kids getting involved in what’s happening politically around them. Keep them educated. That’s what’s important.

Go to https://blackheart.com/ and http://fea210.com/ for music and to keep up with our adventures.