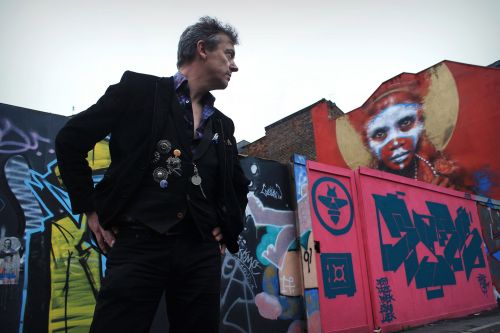 Veteran UK-based urban rock/blues musician Harry Stafford offers his passionate views on Brexit, depression, and the state of the world.

Harry Stafford, who hails from Manchester, England, is a seasoned musician who was the founder, guitarist, and vocalist of the ‘80s post-punk/Gothic rock band Inca Babies.

Stafford went solo after 35 years in Inca Babies, starting to release albums in 2015 that reveled in rock, blues, and piano ballads. His latest vibrant album, Gothic Urban Blues, arrived this past March via Black Lagoon Records.

The singer-songwriter gives his passionate, but clear-headed and clear-eyed views on post-Brexit England and the world as part of our on-going Protest Interview series. Caveat: This interview was conducted before the virus pandemic, so that crisis isn’t addressed below.

Hello Harry! Please introduce yourself and give a description of your sound/musical vision.

My name is Harry Stafford and in the ‘80s I formed the post-punk blues/ swamp Gothic rock band Inca Babies. I would say our star never reached the upper echelon of the firmament, but those who knew and loved us helped us shine brightly in our exclusive but glorious arena.

The Inca Babies still perform; we play some really neat festivals in Europe (Drop Dead, If I Die I Die, Drug me). But in the meantime, between Inca albums I am releasing my second solo Album called Gothic Urban Blues. The first, Guitar Shaped Hammers, came out in 2017 and set the tone and culture for more ideas and experimentation on the theme of urban punk piano blues.

The solo work differs from the Incas in that it’s a slightly more reflective take on the things I love in music. But where the Incas were fuzz guitars, pounding drums, and wailing, I have introduced piano, soaring horns, sonic noise, and slide guitar to an acute collective vision.

The songs are barroom piano punk, jazz interjections, dub blues, and end- of-the-world ballads. I hope the tunes emerge in a fascinating public reverie, in which stomping bluesy figures wrestle with swirling, ‘wind-across-desert drones’ turning into a bouncing clatter, like a silent-movie piano track.

Here in Britain we live in changing times. We have just voted to leave the European Union. I might add that, 17million voted for Brexit; the rest didn’t, couldn’t, or indeed, couldn’t be arsed.

So now we are out. A more short-sighted act of self-sabotage could not have been decided on by a less-deserving bunch of little Englanders, as bigoted as the Brexit Empire they would like to re-create.

Boris Johnson, now PM, used Brexit as a means for power. He couldn’t care less about anyone but himself.

As for the leavers? They seem to live in a world where spitfires still roar through the skies, Britannia rules the waves, and Churchill, the Queen, and Admiral Lord Nelson drive up the mall in an open-topped Rolls Royce as Union Jack bunting makes us the envy of less-happy breeds. These Little Englander Brexiteers believe everything was better in some distant past when they held some notion of Blighty and Empire when Jonny Foreigner quaked at the sight of a blue British passport and marveled at our sheer superiority.

Like Trump and his MAGA caps, it’s a fiction of popularism. In Russia Putin has given his serfdom the notion that Stalin’s totalitarian genocide was a moment of history in better times, because at least you weren’t starving in the street, comrade? – In fact Stalin wouldn’t have considered anyone starving little more than useful ballast of a mass grave.

No one who voted for Brexit that I have spoken to actually knows what leaving the EU will do for them apart from some strange sense of sentimental nostalgia. “We’ve got our country back!” they shrill. Back from where?

On the day of Brexit, 31st January, the British car industry didn’t majestically start making ‘60s Mini Coopers again, Bowler-hatted civil servants didn’t appear from the tube to put into gear the wheels of commerce, and orders of Stilton didn’t provide a cure for the Bank of England deficit.

In Parliament Square a band played “God Save the Queen” and the Bigot in chief, Nigel Farage, got to make his speech, crowing over the ‘Remainers’ and the unpatriotic ‘Europeans’, who had voted to stay. Earlier he had walked out of the European parliament waving his cocktail stick Union Jack bellowing like an oversized dad playing a solo on his child’s mini-drumkit: absurd, pathetic, and out of time.

The Great in Britain hasn’t been magically put back in; it never went anywhere. We were good with Europe. The amazing cultural riches that are European are everywhere and the UK is part of it. The Brexiteers with their ‘Britain for the British’ want to live in a bygone white, ‘idyllic master race’ of ‘us against them’.

A new habitual [and] permitted racism has risen like scum to the top. As Trump has endorsed in the USA.

“Expel the Indian doctors and the Polish builders and the Romanian hotel workers and the Italian chefs and the Albanian fruit-pickers and the Bangladeshi care home workers”, they cry, forgetting that the feckless British worker feels he is above any of these essential posts and would rather they were filled with immigrants, ironically the very people he just voted to expel. WTF!

This has all been said before, but I just can’t help myself to go on about it again. I could go on further, but I’m just too angry.  Grrrr!

Strangely, I was too depressed to actually write a song about Brexit but instead, “Into the Storm,” from Gothic Urban Blues is about expecting the worst.

I really love Idles and this song “Great” it a brilliant stab at the absurdity of it all. This is poignantly put and sums up the pettiness: “Blighty wants her blue passport / Not really sure what the union's for.” It’s a powerful disdain of the state we’re in all built around a loathing of dumb nationalism. If only they were a more popular band and the little Englanders had listened.

The other song has to be Bill Bragg’s “Full English Brexit.” He always comes up with something vital and biting; his Brexit song is just that! It is taking a pop at the excusable racism that permeates polite society, now that bigotry has been endorsed by the government.

I'm not racist, all I want is
To make things how they used to be
But change is strange and
Nobody's listening to me”

His ironic cup ‘filleth over’…

“Painted Ocean” is about a ‘trash-can-sea’ [that] you can see from space. It’s for every single person to take responsibility for not creating any more piles of plastic. Don’t buy plastic at all!! It doesn’t get recycled regardless of what your government says.

Eleven years ago, I lost a very dear friend and fellow band member (Inca Babies) to depression and despair. He was only 47 and had suffered a lot of his life with anxiety and depression. In August 2008 he took his own life and we didn’t see it coming because we either didn’t believe it could happen or we weren’t paying enough attention. MIND in the UK deals with mental health and reminds us that we need to be aware of our friends and relatives’ well-being, especially when we know they might be at a low ebb.

I have two sons who are going to make the world a better place; one is 24 the other is 7. They are the future and it’s our job to make sure it isn’t fucked up for them now, so at least they’ll have something to build on. From the environment to corruption to culture to poverty it has to be a better place for them… surely.