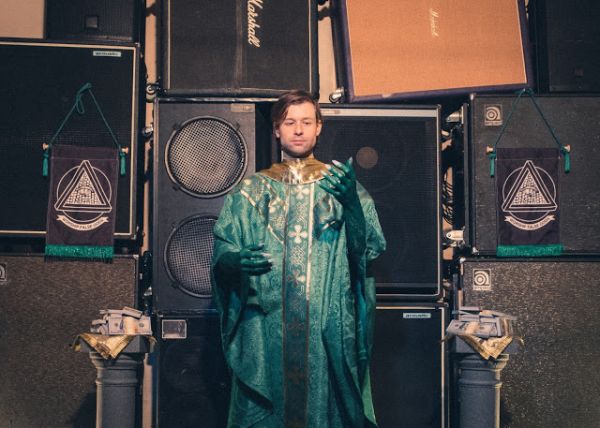 The otherworldly entity of one Jordan Sobolew, Reptoid unleashes an aggressive and abrasive barrage on the LP, all while blasting out his equally caustic views on the dire state of humanity.

Sobolew explains, “I have a somewhat misanthropic view of humanity and I enjoy looking at it from the outside perspective of an alien.”

The ear-catching (and ripping) cacophony of Worship False Gods was recorded at Santo Recording Studio in Oakland by Sobolew, with an assist from Joe Finocchio. The LP was mixed by Sobolew at his home studio, The Mothership, in Oakland and it was mastered by Carl Saff (Bambara, Big Business, Moor Mother).

Rebel Noise is stoked to connect with Reptoid/Sobolew for our continuing Protest Interview series.

Hello! Please introduce yourself and give a brief description of your sound/musical vision.

Greetings, I’m Reptoid or Jordan Sobolew. Reptoid is a one-man, industrial-influenced noise rock band from Oakland. I surround myself with an army of drums, homemade pedals, noise devices, and a sampler to produce spastic rhythms, and painfully amplified sounds through an oversized pedal-board manipulated with my feet. Vocals are delivered through a mic strapped directly to my face by a modified respirator mask. It’s loud, noisy, heavy, and weird.

We’re living in a time where outrage fatigue is at an all-time high. The daily doom scroll through social media has become a daunting task, triggering anxiety, depression, and rage in anyone with half an eye open.

There are so many ever-important causes and they all need our immediate attention as the foundation of our society crumbles at an accelerated rate. The global pandemic and its proliferation due to human ignorance and negligence, systemic racism, money in politics, the evils of late-stage capitalism, rampant human rights abuses, climate change - We could discuss any one of these, and many more at length.

Instead I will try to bring to light to something that perhaps some of your other interviewees might not mention. Because I have used the allure of hidden knowledge in my music and my aesthetic, I feel as though I have a responsibility to address it. Basing my name, and to an extent, my musical persona in the realm of conspiracy theory has attracted lots of interesting fans and conversations, each with their own assumptions of my own views and agenda.

For [very] long I have been fascinated by conspiracy theory and alternative thought, ever since I opened my first book on UFOs from my public library as a child. While the quest for human knowledge despite societal acceptance in unconventional fields is quite noble and often brave, I can’t help but acknowledge how some pools of thought have become deeply dangerous to the public well-being.

The misinformation wars are leading us into some real dangerous territory. Conspiracy theory has entered the arena of the mainstream as armchair experts have filled their minds with ill-informed, anti-science, and anti-evidence based ideas under the guise of free-thinking. It has gotten to the point that conspiracy theorists have become part of a conspiracy to spread disinformation through conspiracy theories.

Please look at the evidence of the ideas you choose to believe. I can’t deny that there are hidden truths woven into the structure of our world, but when a belief in a certain idea can cause a cascading effect that harms the other members of society, it requires an extra level of scrutiny that some random YouTube video cannot provide. Also, wear a mask, you dipshit.

What song, video, or lyrics quote of yours best represents your current viewpoint on these important topics?

I have based most of my music on contempt for the human race. I could pick any one of them and explain how it relates to some of the aforementioned ideas. I will pick the track “I Drank The Punch” off of Worship False Gods that is released on August 28th. The song follows a cult. The members are looking to belong to something higher than themselves. They want to tap into ultimate truth to transcend this meager human existence.

I believe on some level, we are all trying to do this through various forms. In order to be part of a greater truth, we have to disconnect from the earthy truths inherent to this existence and submit to a new reality. Unfortunately for those willing to give anything to get there, the ideas are often based purely in human deception and they sometimes have to pay the ultimate price.

To be honest, I don’t know any musicians that are tackling that specific topic, but the music I enjoy isn’t usually based on vocal intelligibility. The music I love makes me feel something that is more profound than mere words convey. I think this is what good art does. Meanings can be ambiguous and personal. Your personal truths on what art makes you think and feel are more important than the truth of the person singing the song.

This is a hard time for me because there are a lot of important protests going on right now that I feel deeply about outside of what I mentioned above; namely the movement surrounding Black Lives Matter, police brutality, and systemic racism.

I am in a position where my partner is on the front lines of the pandemic, working as a nurse in a hospital that does not responsibly take the safety of their staff into account (which is a whole other cause in itself.)

Because of this, I am at a higher risk for contracting Covid-19 and I feel that it would be very irresponsible and dangerous for me to take part in these protests, possibly exposing others to anything coming from the hospital or taking anything home from the protests to expose my wife’s patients at the hospital.

The way for me to help protests has been to raise money for various causes that directly support protestors and BIPOC people in my community. Because I am an audio engineer who used to make money working large events that are no longer happening, I am currently unemployed, so I have had to be creative in my fundraising efforts.

I have started making large batches of 10-20 pizzas in my home kitchen every week for people to pick up on my front porch in exchange for a donation and several of these times I have donated all proceeds to local causes. I have also had certain days where I will donate all online Reptoid sales to certain causes.

My advice would be to think about what matters to you and find a way to help in your local community. There are people in need in the place that you live. Maybe the answer for you is to donate money to a local cause that helps these people like I did. Maybe it’s just making some sandwiches and passing them out to people who live in the homeless encampments that have become more and more prominent.

I can’t sit on a high horse and pretend that I should be a source of inspiration for others to do the right thing. I’m struggling mentally just to exist as a person in this world, but I know others have it worse still. As much of a misanthrope as I am, my misanthropy is rooted in humanity’s lack of empathy for each other.

Empathy is not weakness. The lack of being able to identify with your fellow human is the weakness because as much as you think you are an individual, your survival and your wellbeing cannot be disconnected with that of the rest of the species.

What gives me hope is to see masses of people around the country surrounding our city streets to say that they have had enough. When people are angry enough to start lighting their institutions on fire because those institutions no longer serve them (and possibly never did), that gives me hope.

When I see young, progressive politicians, many BIPOC, many women being elected to public office, that gives me hope. I am cautious to give in to optimism, but I believe we are seeing a slow turning of the tide. The generation that rules our country now is on their way out and the newer generations are increasingly more progressive.

We have seen monumental changes in public thought towards progress in my lifetime. Every time we advance, the system pushes back hard, but they can only push back [for] so long. The hope lies with young people who are more progressive than ever. Unfortunately, these old ideals have to literally die out first.

Lessons in Controlled Panic: An Interview with Sprain