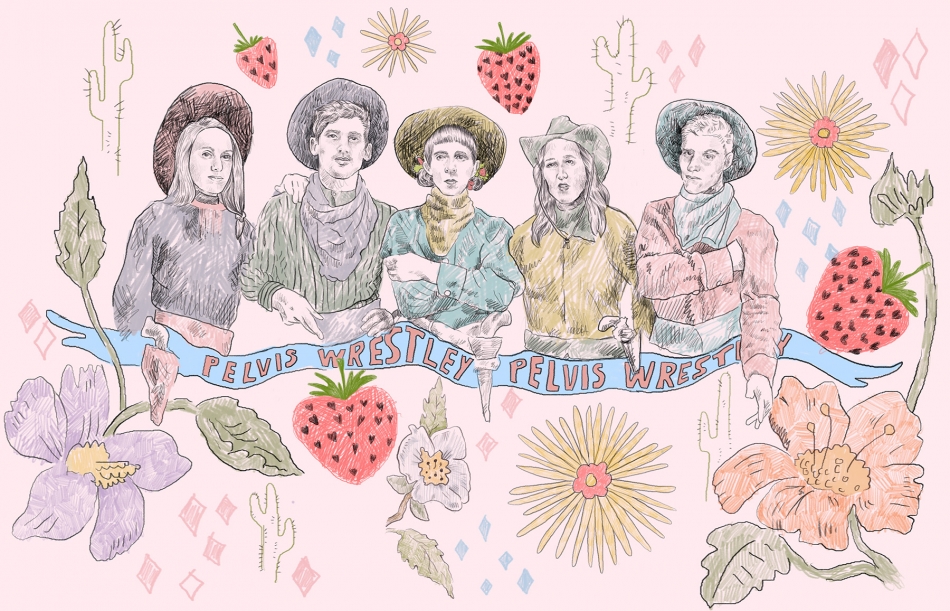 Harkening back to country roots, Austin’s very own Pelvis Wrestley succeeds at infusing glam-pop with the likes of Patsy Cline, June Carter Cash and other western idols. Gaining immense traction since 2018, frontman Benjamin Rowe Violet harnesses rare storytelling capabilities in his lyrics that unravel vast and gorgeous imagery to emerge within tightly knit instrumentation. Produced by long time friend Jake Miles at his home recording studio, the two were childhood friends stemming from differing backgrounds and growing up together on the same neighborhood street. “I grew up in a very conservative Christian home”, mentions Violet. “I really liked hanging out with Jake, but I wasn’t supposed to like hanging out with Jake. We drifted apart around high school”, where upon graduating Violet spent ten years of his formative life living in Seattle, Washington. Reconnected after veering apart for over a decade, the two bumped into each other in Austin while Miles was working a shift at Antone’s Records. “We had this really weird puppy dog moment of making eye contact with each other and trying to suss out who we were”, laughs Violet. Reigniting their friendship concluded with working in various artistic projects together, including a stop-motion music video for SMiiLE’s upcoming track “Shine (reprise)”, as well as an obvious decision to record Pelvis Wrestley’s upcoming full length album, Vortexas Vorever.

Comprised of guitarist Santiago Dietche, drummer Sarah Schultz, violinist Behnam Arzaghi and Hannah McVay on synthesizers, the group has grown in their collaborative efforts which is plain and striking to see in their united sense of camaraderie displayed in their live stage performances. “Starting Pelvis Wrestley with them, I had this experience of preparing for our first show where they were showing up with ideas that were inspiring to me that made me feel more and more relaxed instead of tenser and tenser as we approached our first show, which was an entirely unique experience”, states Violet. “It’s been cool to see them own and contribute to the songs in such a meaningful way.” Praising the crew’s technical and creative proficiency has led Violet to foster his own ideas and specific approaches within the group as well as look up to the members and learn from them, much like the role a little brother would play in a familial dynamic. “I don’t know how people that are as talented as them manage to be as humble and un-ego driven”, he emphasizes. “They have a lot to brag about, and they never do.”

Citing the significance of the album’s title, Vortexas Vorever, Violet speak of his travels and transformations that took place between leaving Washington and coming back to Texas. The decision to move down south was spurred on by the collapse of a succession of major life plans built during his time in Seattle, a process that eventually carved a path for a spiritual journey back home. Highlighting Enchanted Rock, a granite mountain located near Fredericksburg and approximately an hour outside of Austin, serves as a significant marker for Violet’s latest record. “[It] extends for miles and miles and resurfaces in two other places around central Texas, which, as they say, forms this energy vortex that is conducive to healing and is attractive to people. Austin being a creative hub is often attributed to this vortex”, remarking on the intangible calling a location can often provoke within one’s own spirit.

While there’s a lot to be said about criticism within the music industry as a vast entity, Violet has emphasized the importance of looking inward at the way he wishes to engage with media as well as decisions within his control concerning how to make desirable changes come to fruition. “It’s one thing to say ‘well, bookers need to put on a lot more shows featuring Black artists’. That’s a great thing to say, but at the same time, who’s going to the shows?”, he reflects. “Making the things we’re asking for financially feasible is on the audience. I think we vote with our dollars, and we vote with our attention. If a club puts on a show with predominantly Black artists and we’re not supporting shows like that by showing up and staying there, then it’s not going to be likely that those shows continue. Because if we’re real, as much as clubs want to do the right thing, they will tend to do the right thing based on where the money is.” We as individuals tend to be drawn to the familiar and what we already recognize, while disregarding art and information that asks of us a greater sense of awareness and analysis when interacting with it. “Just because something isn’t tailored for you doesn’t mean you can’t engage with and learn from it […] It’s amazing how much work it ends up being to look at that and examine how I’ve excluded certain pieces of media from my diet because there’s not an immediate and easy access point for me”, Violet remarks, reinstating how we don’t have to wait until the music industry rebuilds itself post-pandemic to commit to taking action today regarding how we choose to interact with media that’s already available at our fingertips.

You can pre-order Vortexas Vorever digitally or on cassette tape at Austin Town Hall Records ahead of its release next Friday. You can also pre-save their album on Spotify and DM the band to enter for a daily drawing to have Violet draw your portrait as a lonesome cowpoke leading up to September 18th.