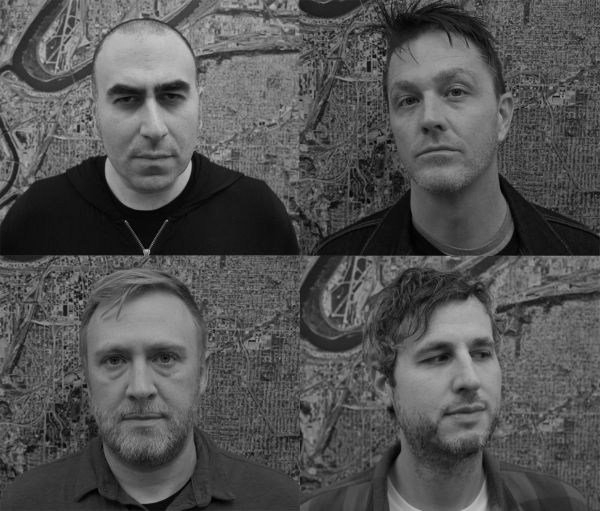 Kansas City-based alt-rock band Search & Seizure released their recent Outer Space EP in early March. The band eerily presciently stated at the time, "Give it a listen… Life is short and we’re all going to die. Let’s at least have fun while we’re here."

It’s that mordantly perceptive attitude that runs through Search & Seizure’s new tunes, and also their responses to this Protest Interview series. The songs on the record are sonically powerful and dynamic, but at the core are heartfelt, wry, and potent emotions, with lyrics that grapple with break-ups and other life-changing events.

At the time of the EP’s release, the band also had this to say: “In the context of the EP title and artwork, which is a high altitude satellite-like map of our city, [we looked at] the city and all the situations we encountered from a different perspective. In the midst of a bad situation, it seems insurmountable, but when you are far enough away from it, you begin to realize how insignificant it was."

We're what can best be described as an alternative rock band from Kansas City, Missouri.  We grew up listening to and being heavily influenced by bands from the '90s and '00s, so massive drums and loud guitars are naturally a big part of our sound. Being from Kansas City, we have also been heavily affected by too many great bands to mention from and around our city.

As of right now, we're most concerned about the surreal world we all live in with the COVID-19 virus and all of the things that have unfortunately come with it. In a matter of a few weeks, the world has changed. People are staying inside, the economy is in free fall, most of our friends are out of work, all the places we play are shut down, businesses are in jeopardy, and no one can see any end in sight.  Everyone is scared and no one has any answers. It's the most widespread uncertainty that we have experienced in our lives and it feels like something out of a zombie apocalypse movie.

Although we didn't see any of this coming, I feel like our song "Missing Person" is probably the most applicable. It's about someone changing so much over time that the people around them are searching for someone who's gone.  I feel like the world we knew just a few weeks ago is gone too. I'm certain many things will go back to normal at some point, but I also know there are many things that will never be the same.

What’s your favorite song, video, or lyrics quote by another act or artist that best exemplifies, or at least partly relates to, your current viewpoint?
I would say "Don't Stand So Close to Me" by The Police is apropos…

We protest by drinking copious amounts of coffee, argue about politics, and attempt to predict the future. Jason watches nothing but Seinfeld reruns and listens to nothing but Phil Collins records for months on end.

It’s easy to judge and criticize others, especially in these unsettling times of overt intolerance, ignorance, and insults, but the fact remains that we need to work together. Working on a solution to the problem is critical in ensuring that positive change occurs. Name an action to take, or a campaign/charity that would be worthwhile to contribute to, for your cause.

I think that a crisis such as the one we are in has the potential to draw people together. Instead of focusing on our differences all of the time, we begin to realize that we're all in the same boat.

Visions Through the Trapdoor: An Interview with Bizou