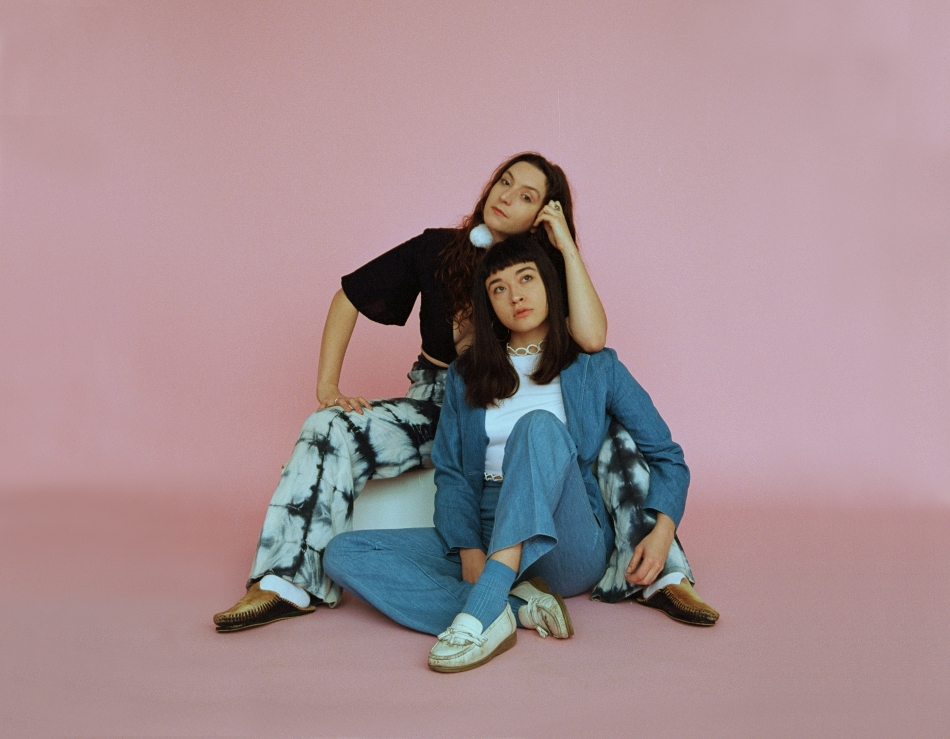 Formed within Chicago’s dynamic music scene, Macie Stewart and Sima Cunningham of Ohmme are heralded as the heart of the city’s thriving community, known and established as distinctly disciplined and continual collaborators. Upon meeting over a decade ago through high-school and starting a band with Cunningham’s younger brother, Liam, Stewart discovered the complimentary nature of their vocals as well as their methods of creativity and how well their musical tastes paralleled. Formulating Ohmme in the summer of 2014, they released their self-titled EP in 2016 followed by the highly praised 2018 LP, Parts, and are set to release their sophomore album, Fantasize Your Ghost, on June 5th via Joyful Noise Recordings. The duo continue to experiment and bend the constraints of their instruments through their explosive ten tracks, transitioning between melodic harmonies and discordant guitar pummeling. Having formed and maintained their tight bond allows both Stewart and Cunningham to riff off their respective creative outpourings while in the studio recording. “The both of us, for better or for worse, are pretty hard-headed over achievers so we always want to try and do everything. Sima is definitely more of a planner and that’s a really big strength of hers which is incredibly helpful for the band, and I think I’m more of a go-with-the-flow-er”, she laughs.

Joining extensive tours with the likes of Twin Peaks, Wilco and Iron & Wine, the two are no strangers to entitling the road as having a keen sense of familiarity. “This is the longest that I’ve been home in maybe eight years”, states Stewart. With COVID-19 causing their run of tour dates with Waxahatchee and V.V. Lightbody to get re-booked to later this fall and into January 2020, she has had to re-evaluate what it means to sharply shift her life’s plans from spending the next couple of years from living in a van to sheltering-in-place in her apartment. “It’s surreal because I feel like I spent so much mental energy shifting my perception to [touring extensively] and now that’s just not what it is […] It’s been like running straight up in a brick wall, in a way”, she laughs.

By no small coincidence, Ohmme tackles themes pertaining to the meaning of home, identity and change with Fantasize Your Ghost set to come out in the middle of a global crisis. Finding the silver lining amidst their halted plans for their album release, Stewart has found periods to reflect and think critically about the trajectory of how far their band has come and where they are headed. Despite not being able to proceed with their summer tour dates, she remains optimistic. “I think a lot of people are really looking forward to new music and are paying attention a little bit more because there’s time to pay attention and time to sit with a record […] While it might not be a release in the traditional sense, it’ll reach a lot of people that are excited to support art right now because it’s very hard to continue with the “normal” way that it usually has”, she expresses.

While Stewart reminds us that there’s no replacement for playing live and experiencing an intimate and enthusiastic performance with their audience, they’ve been able to make the most of their current situation by playing live streaming sets for their record label, Dr. Martens and benefiting Arts for Illinois over the last several weeks while also finding ways to include their drummer, Matt Carroll, who resides in Copenhagen. “The live streaming has been fun to figure out. Every time we’ve done one or watched someone else do one it feels nice because it feels like an escape. You get a little taste of what is out there or what a ‘normal’ life feels like […] There are all these different new ways to try and get that creative energy across. Knowing that touring might not come back the same it has been, but also knowing that this is not permanent, makes it more exciting to try and explore all of the ways that we can work within this restricted technology”, she says.

During this period of quiet and uncertainty, Stewart has had to directly grapple with her immediate transitions that resonate throughout Fantasize Your Ghost. Conveying her thoughts through songwriting and creating a variety of art for the pure sake of creating have been rewarding channels to express herself. “I try not to fight change when it needs to come but you want to maintain some semblance of control in your life, whether or not it’s real or something that exists in your mind. As this has grown into something that is more than just two weeks off, I’ve gone through all the stages of grief — what are the five stages?”, she asks, laughing. “Right now I’m at a moment of acceptance and realizing that the only way to move forward is to move through it and take whatever has to come with that, because there is something at the end of this. It’s going to be new and different and scary, but we are inevitably moving towards it and I think that is a comfort in a way, to know that it is moving somewhere.”

You can pre-order Fantasize Your Ghost ahead of its June 5th release here.

Reinvention in the Void: An Interview with Mirabelle