Visions Through the Trapdoor: An Interview with Bizou 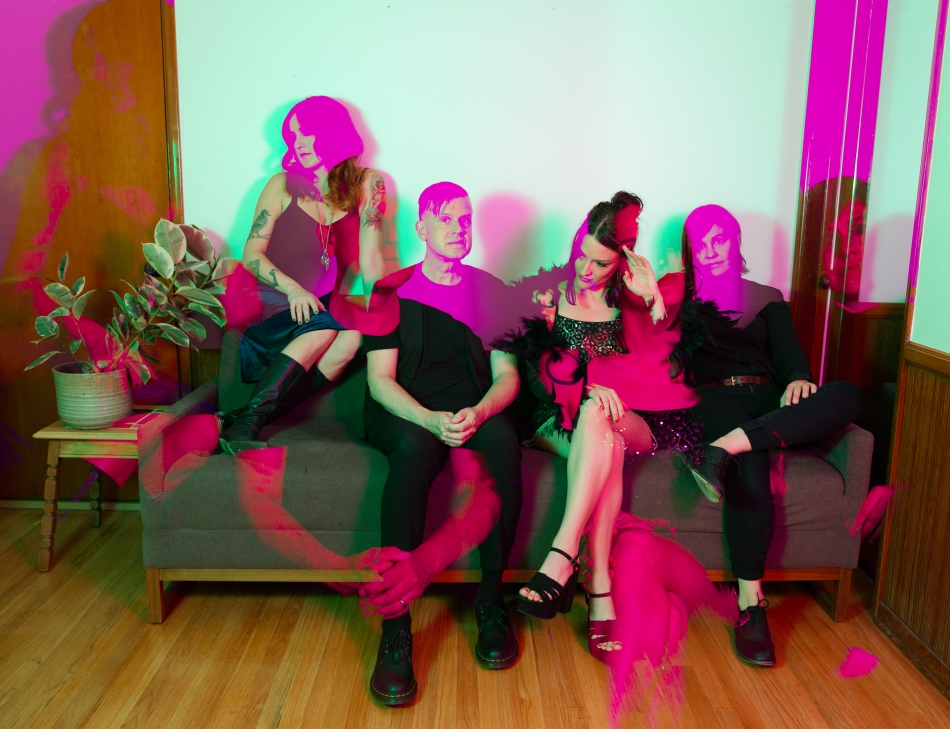 A collective merging of exceptional musical minds, Los Angeles’ Bizou stakes their place in memorable post-punk and pop territory. Featuring members from The Smashing Pumpkins, Wax Idols and Light FM, Bizou is an amalgamation of brilliant creative forces into one cohesive and ever expanding project. Itching to get back to music after her period working alongside Billy Corgan, Nicole Fiorentino started playing with long time friend and guitarist Nicki Nevlin and multi-instrumentalist Josiah Mazzaschi before the entry of Marisa Prietto stepping in for lead vocals and officially forming Bizou’s current lineup in 2017.

Their initial self-titled EP lends itself to lush and dreamy aural scopes while their upcoming four track EP, Stillifeburning, explores the darker side of their musical repertoire. “I don’t know if we were all in a dark place when we wrote this one. The mood changed really dramatically,” Prietto states. Echoing on her reflections, Mazzaschi reiterates the brooding mood and melancholy sentiments that Stillifeburning encapsulates. “This EP is a lot darker. And our new stuff is even more darker. It’s just going to keep getting darker and darker,” he laughs. Describing their EP as very post-punk sounding, the group also wanted to find ways to craft their tracks into accessible pop songs while maintaining their experimental sound. Never in a constructive rut, Fiorentino comments on the rapidity of musical brainstorms that her bandmates are constantly sharing. “Josiah and Marisa are like writing machines — every other day I’m getting an email saying ‘hey, listen to my idea!’”, as she comments on their persistent collaborative process and sustained inspiration they all share with each other. The members also coalesced in self-directing their latest music video for “Crashing Sky”, merging images of grunge and glitter into a 90’s-era VHS nostalgic capsule to fit with their visual-laden lyrics. “If you could dive into into the subconscious of another person totally separate from you, as if through a trapdoor — that to me would describe the feeling of these songs”, states Prietto, aptly titling Stillifeburning’s closing track with “Trapdoor”.

With their EP set to release next week, I asked the band how they are coping in light of COVID-19 and the live music and touring scene coming to an abrupt halt. “I feel guilty admitting this, but I’m kind of really liking it, a lot”, says Prietto. “I was personally really stressed out about the next couple months because both of my bands were going to be doing releases and I’m going to be in school until June, and I’m thinking, this is impossible. There is no way that I can do this, and then everything just got totally cancelled. The whole entirely thing is totally fucking awful, but on a microlevel it’s weirdly okay for me […] It’s almost like life under capitalism has been completely unsustainable for everybody, for a really long time,” she remarks. The band reiterates how day-to-day life has slowed down in different forms, from personal leisure time to the evident climate change. In trying to find the silver lining as she shelters in place with her dog, Fiorentino describes how “the fact that in the 20 years I’ve lived here, the air has never felt so clean or looked so clean. I can already feel the difference.” Nevlin hesitatingly describes symptoms of a sore throat and congestion during the FaceTime interview, but has been keeping busy with cooking, baking and gardening. “I don’t have a job right now, so I’m just trying to enjoy it and not freak out”, as the band relays feelings of getting back on the mend soon. Considering the impact that touring has not just on the environment, but as a sustainable means of income as well as for musicians’ mental health, Prietto contemplates the fundamental foundation of the music industry at large. Now that artists are all on an equal playing field, she poses the challenging question of how musicians may start to redesign the music industry’s hierarchical and ultimately fallible structure in a way that is more supportive in the long term. “I’m curious to see how we all collaborate as artists to figure out how we want to actually be doing this. If we don’t decide how we’re going to do it, it will be decided for us by somebody else.”

Stillifeburning is available for pre-order ahead of its April 10th release via Bizou’s Bandcamp.