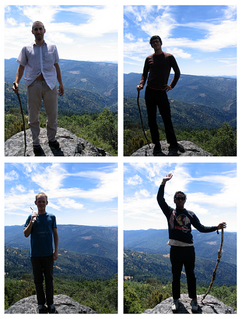 After a conversation over Vice magazine and living in bathrooms, Drew, of the band Le Joshua, and I buckled down for an interview. On the early morning of June 23, 2003:

W: Meow, so how long has Le Joshua been around? And what inspired you to start it?
D: We’ve been around for one year. Yesterday was our birthday.
W:  How nutty, that’s great. Influences?
D: What influenced us? When we first started I guess we were just tired of all this punk shit that is in our city. We wanted to make music for people to actually dance to and not punch each other. We wanted everyone to have black bobs and nice shoes. But later on we got rid of that idea, we just make what we feel like now. If people want to dance then they can dance.
W: What bands did you guys take inspiration from as a group?
D: When we first started; we were inspired by the Liars and the Make Up a lot. We’ve always loved everything by the Make Up. I don’t remember many musical influences.
W: When you first started, does that mean you pull from different bands now?
D: When we first started we had an old singer and not our keyboardist/guitarist, so we were pretty different from what makes us up now.
W: When did you decide to add keyboards?
D: Well we had keyboards but Waldo had to switch from guitar to keyboard, it wasn’t working out that way because it was very limited to what we could do. Now we have so much we can do, oh baby.
W: Alright, so where was your first gig?
D: Shit, I don’t remember, a while ago, we played as rock goggle fantasy. They were out of town playing a show in San Diego so we went on as them at this show in Venice. Quite a bit of people were pissed and quite a bit danced and liked us. One girl came on stage and pulled out the microphone.

W:  I know you guys know rock goggle fantasy, how’d they react to the show?
D:  They knew about it. We are great friends with them, GREAT friends.
W: What type of things did you guys do to get the band out there, besides staging as another band?
D: Man, we didn’t really go about the usual way. When we first started off we didn’t want to play a lot of shows, at all. I don’t know why. The thing that got us out there is probably just our live show and our looks and our music, deviation from the boring dull south bay punk rock.
W: How often do you guys play gigs now?
D: We play gigs whenever we can now. We found out how hard it is to get gigs in the first place so we aren’t going to limit ourselves anymore.
W: Ok, yea, you just reminded me, how’d the gimmick come about, your choice of dress when you perform?
D: We want to be sexy. We want men to enjoy us sexually just as much as women
W: Could you give the lineup? And possibly how long each member has been playing outside of the band?
D: Waldo Hurtz, guitar machine, since 1986. Mama Cass, drum machine, unknown. David Blain, on guitar and key machine, since the DARK AGES BABY. Monsieur Fantastique, vocals, a couple months now.
W: Awesome, any last words or show info before we depart?
D: Last words, Point to the SKY.

Visit their site: www.lejoshua.tk Checkout a show, and support your tiny local scene. This band is from Southern California. Their last show was a benefit, where 1/3 of the proceedings went to the Food Not Bombs Network (FNB), at the Westchester Sports Grill.

Interview with Jess Margera of CKY