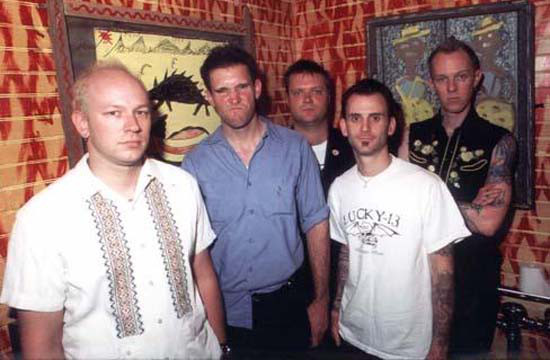 Catching up with Darius Koski of The Swingin’ Utters

REBEL NOISE phoned DARIUS KOSKI of the SWINGIN’ UTTERS the day after the UTTERS’ latest record, DEAD FLOWERS, BOTTLES, BLUEGRASS, AND BONES, hit stores.  Speaking from his home in San Francisco, KOSKI gave REBEL NOISE the lowdown on what’s up with the UTTERS.

It’s a weird thing. It feels like breaking up with your girlfriend. It just kind of happened, and when it did, I wasn’t really that surprised.

Last night, we had a record release party for DEAD FLOWERS, BOTTLES, BLUEGRASS, AND BONES at this little club in San Francisco called 330 RICH.  We invited tons of guests, and a lot of Fat Wreck Chords people were there.  We also did an in-store at a record shop on Telegraph yesterday.

“The LA SHAKEDOWN was a horrible mess.  I’m going to say something about that show on our website—www.swinginutters.com—in the next couple of days.  But yeah, it was a total disaster.  The venue changed like three times, and a lot of people got ripped off.  A lot of people who paid were unable to get in.  And tons of bands didn’t get paid.  We didn’t get paid.  It was bad, really bad.  The VARIETY ARTS CENTER supposedly pulled out of the contract because they were afraid of a riot or some bullshit.  So it got moved to three different clubs.  We played the second night, on Sunday, at a club called GRAND AVENUE.  No one’s really been there before.  It was called MYRON’S back in the day.

“We only have one definite tour planned for right now – from March 21 to April 21, we’re playing the Eastern US.  We’re starting in Phoenix, and then we’re heading into Denver before going all along the East Coast.  A month after we finish that tour, we’re going to do a West Coast tour for a couple of weeks.  Eventually, I hope that we’re able to do a Canadian tour and a Midwestern US tour.  We have lots of tour plans and we’re going to hit it harder than we have in recent years, but the March 21 to April 21 tour is the only one that is booked right now.  PISTOL GRIP will be opening, and for the first two weeks, ONE MAN ARMY is also going to support.  Then, starting in Atlanta, YOUTH BRIGADE supports.

“There’s a reason why we can only tour for a month at a time, and basically it all comes down to kids and money.  Yeah, we could make more money if we toured a lot more.  But I’ve got two kids, [singer] JOHNNY [BONNEL] has a kid, and we don’t want to be away from our kids for that long.  We made a rule that we only take tours that last for a month a time, maximum.  So we’ll see what happens.

“In the past, we’ve toured with LARS FREDERIKSEN & THE BASTARDS, the DROPKICK MURPHYS , and the DAMNED.  All of those tours were fun, great tours.  When we toured with Lars and Dropkick, it was good because we were touring with old friends.  We’ve known Lars since ’94—he worked on our first record.  We’ve known the Dropkick guys since they started that band.  It’s amazing to see how the Dropkicks have really blown up, because they’re huge now.  Touring with the Damned was great because they’re ‘the Damned.’  I was happy just to have met those guys.  They’re kind of glammy, but that’s their shtick.

“I would love to tour with the BUZZCOCKS.  I’ve never met them, but they’re one of my favorite bands.  And I never got to meet JOE STRUMMER, which sucks.

“We started working on DEAD FLOWERS, BOTTLES, BLUEGRASS, AND BONES in our rehearsal room a year ago. It’s been a long time in the making, and I’m glad that the recording part is over and the record is out now. It wasn’t a horrible experience, but it was stressful and took a long time.

“Also, [guitarist] MAX [HUBER] quit the band while we were recording.  Max lives in New York, and it was hard to keep things going with him.  With him in New York, it was hard for us to do one-off shows or even a couple of shows in a row.  And Max had problems getting here in time to rehearse for records and tours, and that got frustrating. It’s a weird thing. It feels like breaking up with your girlfriend. It just kind of happened, and when it did, I wasn’t really that surprised.

“When we make a record, we usually shoot for having somewhere around 20 songs ready, even though we never use that many.  I always have songs available because I write a lot.  So that’s why I usually have more songs on the record than anyone else.  It’s all up to whoever has got songs ready.  I like the diversity of different writers and I think it makes things more interesting.  But I love having my songs on the records.

“The last song on DEAD FLOWERS, BOTTLES, BLUEGRASS, AND BONES – ‘Shadows and Lies’ – was written in a weird style, at least for me.  I don’t know if I had a dream or what it was, but I wrote it in my sleep.  I woke up and was walking around the house just humming this melody and I had the lyrics.  It was crazy.  I feel like I have a special sort of connection with that song even though I don’t know where the fuck it came from.”

Interview with Jess Margera of CKY