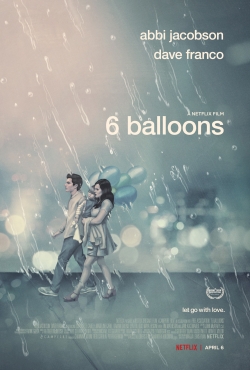 There’s no shortage of films lending insight into one’s individual battle with drug abuse and addiction, but rarely do we come across work that spotlights the enabler’s point of view. Premiering at SXSW 2018 and now available to stream on Netflix, director Marja-Lewis Ryan’s drama 6 Balloons stars Abbi Jacobson as Katie in the midst of planning a surprise birthday party for her boyfriend yet inevitably commits to saving her brother Seth (Dave Franco) after the realization he’s on yet another heroin withdrawal. Based on the experiences of producer Samantha Housman, 6 Balloons spans the course over one tense night depicting not only the obvious physical manifestations of Seth’s drug abuse, but also Katie’s inward dependency when it comes to enabling her brother.

Ryan stresses the ways in which our upbringing ties into our behavior and asks to what degree do we have the ability to change. From the very first scene we’re introduced to familial tension, albeit in a humorous way, between Katie and her mother Gloria (Jane Kaczmarek). Constantly nitpicking and never satisfied, Gloria comments on her daughter’s appearance and doesn’t ever miss a shopping sale to purchase items that serve as gratuitous. Katie’s habits tend to follow suit with a desire for perfection, even in the way the food for her planned surprise party are laid out. Serving as a drastic clash with her brother’s unpremeditated drug withdrawal, Katie’s agitation is clearly shown through her words and gestures. Driving through the slums of Los Angeles after clinics not admitting Seth due to his insurance, Katie finds herself in the most uncomfortable of states caring for his infant daughter in the backseat while the next moment venturing out of her comfort zone to score drugs and needles for her brother. The physical pull of the GPS’ instructions repeatedly commanding Katie to turn around is near palpable, yet she continues to go through the motions of looking after her brother’s needs like she has so often in the past. A (sober) conversation between Seth and Katie emphasize the predictable nature of their parents’ responses to crises in the past, proving to once again ring true when both siblings finally arrive back at the party. The opportunity to change always seems to be hovering right in front of us; it is only when we consciously choose to veer towards another path does change finally begin to flourish.

Throughout the film, Ryan meticulously juxtaposes scenes of Seth’s compulsive mindset and Katie accounting for his neglectful behavior. Seeming a world away from the comfort of her home, friends, and family, Katie instead venturs onto new territory asking strangers for drugs, or tending to Seth’s daughter’s diapers in a grimy pharmacy bathroom while he takes care of his withdrawal several feet away from them in a locked stall. While impressive in both of their performances from recognizable comedic roles to a commanding drama, 6 Balloon’s execution of voice-over combined with aural and visual images of suffocation and drowning broaches the line towards the obvious and convenient. A self-help audiotape echoes Katie’s state of mind in a series of chapters, yet the film would have been better left to its own devices without and for the audience to infer her sentiments in a world wrought with emotion that’s often messy rather than constricting them on a neat platter.