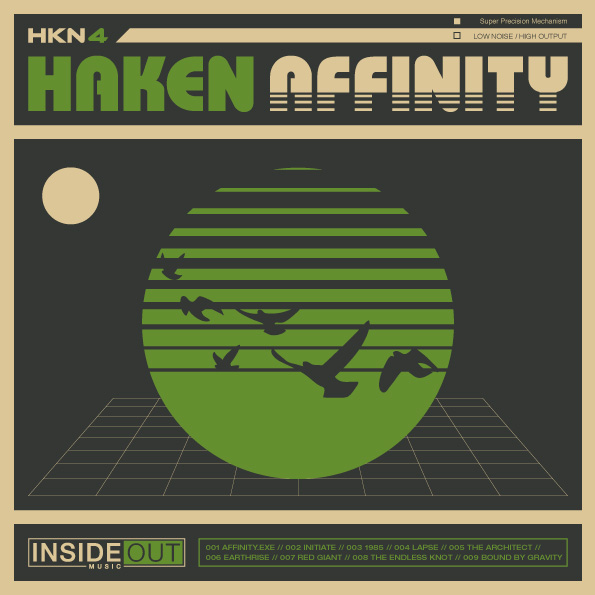 Even the album cover is retro 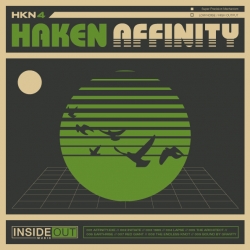 Even if it is a bit more polarizing than fans may expect, there’s no question that Haken is still at the top of its game, and ‘Affinity’ is surely one of its greatest achievements.

Because London sextet Haken formed only a decade ago, it’s fair to say that its rise from local curiosity to international household name (well, with genre fans, anyway) has been remarkably quick and steady.  Of course, the acclaim has always been well-deserved, as the group’s previous works contain some of the most adventurous, ambitious, and accessible music in modern progressive rock. Happily, the band maintains such excellence on its fourth full-length effort, Affinity. Another tour-de-force of bittersweet vocals, captivating melodies, passionate musicianship, and epic production, the collection’s heavier aesthetic makes it feel fairly different from its immediate predecessors, yet it still upholds Haken’s masterfully distinctive chemistry throughout, resulting in another exceptional sequence.

Whereas 2013’s The Mountain LP and 2014’s Restoration EP were, in a way, gorgeous homages to the symphonic prog of the ‘70s, Affinity focuses more on a retro progressive metal vibe (so it feels more akin to, say, Dream Theater, Queensrÿche, and Fates Warning than Yes, Genesis, or Gentle Giant). In fact, lead vocalist Ross Jennings says that the record deliberately harkens back to the more aggressive tones of 2010’s Aquarius and 2011’s Visions. That said, the majority of Haken’s trademark attributes are still intact, and you have to commend them for pushing themselves into new territories.

This disc also represents a change to the songwriting process, as “every member contribute[d] initial ideas from the very beginning of the process.” Jennings adds, “It is the most collaborative we have ever been on an album . . . this approach has helped to create something completely fresh whilst maintaining the core elements of Haken’s sound.” In keeping with the fiercer direction, Haken even has Einar Solberg of Leprous (with whom they toured in 2015) contribute guest vocals on a track (“The Architect”). Considering how cooperative the creative process was this time around, as well as the themes explored within (which revolve around human connection and growth), it makes perfect sense that the record is called Affinity. Likewise, fans of Haken’s past efforts will find plenty to adore here.

After about a minute of radio broadcast dissonance and ominous sound effects, tense percussion helps segue opener “affinity.exe” into “Initiate,” the album’s first proper song. As usual, Jennings’s softer tone conveys charming vulnerability, while his more fervent moments are superbly powerful. (He’s still one of the genre’s most distinguishing singers, after all.) Similarly, the biting guitar riffs of Richard Henshall and Charlie Griffiths build an affective call-to-action mood, while keyboardist Diego Tejeida encases all of the colorful fury in dreamy atmospheres. Naturally, the rhythm duo of drummer Raymond Hearne and bassist Conner Green keep the momentum going with intense precision, and the fragile backing harmonies add another layer of intriguing depth. Right off the bat, Haken sounds as focused, poised, and characteristic as ever.

As its title suggests, “1985” takes listeners back thirty years sonically, with drum and synthesizer tones that feel plucked right out of the time period; in particular, the keyboard and guitar solos halfway through would’ve fit perfectly in an 8-bit NES game (or during any of the inspirational montages that dominated ‘80s action and sports films). Of course, there’s a fair amount of modernized flair, too, including some of the album’s most virtuosic arrangements and soaring melodies. Here, Haken manages to merge two vastly different eras with great success, making the track feel experimental and atypical yet also right at home within the catalog.

The centerpiece of the record, “The Architect” is also its longest, clocking in at over fifteen minutes in length. Fortunately, not a moment is wasted. Following some digitized apocalyptic build-up, the band launches headfirst into some seriously complex and ferocious territory, with dizzying guitar patterns moving around equally feisty syncopation and luscious orchestration. The song proper is more straightforward and moody, with computerized effects decorating the musical foundation. Around the halfway mark, layered guitar arpeggios meld with a mimicking bass line, spastic rhythms, and delicate strings to introduce a new segment. Jennings provides multiple melodies over it all, creating a wholly wistful passage that, frankly, evokes the past couple BTBAM records (which is never a bad thing). It doesn’t take long for the madness to return, however, and incorporate Solberg for a few bloodcurdling verses. (Although his moment may not gel with listeners who don’t like death metal, it definitely fits within the context of the track, and it once again shows how Haken is trying new things on Affinity.) The remaining minutes more or less go back to the intricacy of the beginning and conclude with a robust sense of closure.

The remainder of Affinity is quite strong, too. For instance, “Earthrise” has a wonderfully hopeful spirit, with some lovely instrumental counterpoints, harmonies, and piano playing scattered around, while ‘Red Giant’ is more atmospheric and distressing, with industrial layers that signify impending doom. Aside from some spacey transitions (which recall Ayreon’s two Universal Migrator albums), “The Endless Knot” is upfront and opaque, with purposeful lyrics crying out for “a hero to prevail.” In contrast, closer “Bound by Gravity” is likely the softest and most beautiful piece here, with shimmering vocals, warm tones, and alluring melodies generating a general sense of peace within the listener. Not only is a great track on its own, but it’s also a fine demonstration of how dynamic Haken can be, as the sextet is equally skilled at being lusciously serene and hostilely sophisticated.

Above all else, Affinity serves as a way for Haken to explore its heavier tendencies while paying respects to the metal bands that influenced it. As a result, listeners who like progressive metal more than progressive rock will probably prefer it over its precursor, while fans who cherish Haken’s subtler and brighter side will still favor The Mountain. Either way, the LP demonstrates a sense of trialing that isn’t found nearly enough within the genre; rather than repeat the same successful formula, Haken has pushed itself out of its comfort zone a bit while also ensuring that all of its quintessential elements remain intact. Even if it is a bit more polarizing than fans may expect, there’s no question that Haken is still at the top of its game, and Affinity is surely one of its greatest achievements.