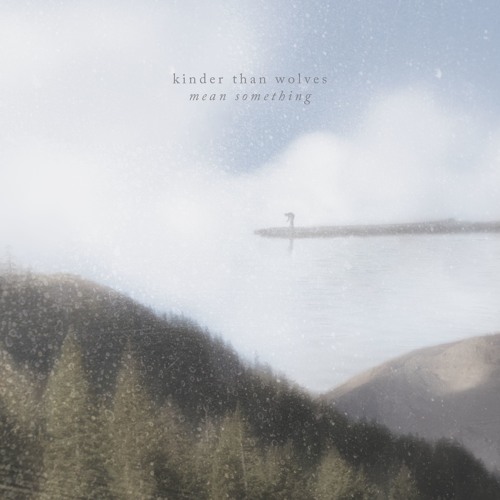 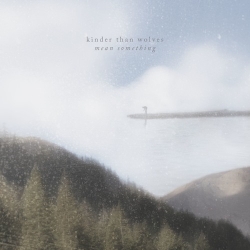 Orlando, Florida-residing indie rock trio Kinder Than Wolves adds a layer of captivating dream-pop to its edgier rock sonics.  Paige Coley (vocals, guitar), Ryan Snow (guitar), and Grant Freeman (drums) released their debut EP, Mean Something, on April 15th.  The EP is awash in vibrant and changing guitar textures and drum rhythms, with Coley’s airy vocals hovering over the instrumentation, a blend of sweet reverie and forlorn melancholy that captures the fragile and fleeting nature of time and memory.

The members of Kinder Than Wolves are all audio engineers by trade and their talents in this field shine through on the sharp and polished production of Mean Something.  The sound, as well as the vocals and lyrics, all swim in a nostalgic ambience, with Coley reflecting on the past – the glory of youth and the bittersweet memories that ensue as time goes by.  The trio doesn’t get mired in the maudlin, however, at least sonically and vocally, and keeps the instrumental aspect buoyant and the vocals ethereal.

The enchanting starter “Hazel Days” glistens with bright, liquidy guitar lines, shimmering cymbal crash, and a pronounced, but steady-paced drum beat.  Coley murmurs diaphanously “When I think of you / it’s in the same way that I used to.” amid the running guitar strum and punctuating drum beat.  There’s a break in the mid-section where she quickly ticks off a list of treasured memories, like the snapshot “Saw you waving from the shore.”, against a rolling drum beat and short guitar flourishes.

Next number “Weapons” begins with brief acoustic guitar strum before the measured drum beat and guitar chime come in.  Coley sings in a gentle tone “Damage control / ‘cause I’ve said things I should not have.” amid the stop ‘n’ start drums tempo and complex guitar pattern.  She’s trying to fix a broken relationship, asking her other half to “Drop your weapons…”  The guitars suddenly whirl with intensity, backed by drums and cymbals acrobatics, but then settle back down as Coley questions whether the relationship can be fixed by the end of the song.

Lead single “Hover” belies its title and actually kicks up the rock a notch, roiling spiritedly with shining guitar lines, a sharp drum beat, and cymbals scintillation.  There’s a tugging bass line undertow that adds more depth as the drum beats and spinning guitar lines fly by.  The chorus breezes along at a fast clip with Coley wistfully singing “You used to calm me down / Now I can barely feel the ground.”  It looks like the relationship didn’t work out…

The shadowy title track is a grand comedown that features lofty, ringing rock guitar notes, a kinetically morphing drum beat that goes from slow to faster, sporadic cymbal ticks, and Coley’s echoed vocals.  She reveals that “I’m not done with you yet / Make me say something I’ll regret.”  There’s bitterness here, but it’s softened by Coley’s hushed vocal delivery, her suppressed emotions, the darkly radiating guitar riffs, and the overall stately atmosphere of the song.

EP-closer “Make You Feel” commences quietly as acoustic guitar strum with fingers glancing over the strings, a second guitar line, and Coley’s close-up, light vocals mix together.  She admits “I want to make you fall in love with me.”  As the song progresses, the guitars and vocals fade away and a thumping drum beat materializes.  Mid-way through the tune, the sonics open up in a swirling effusion of brightly distorted guitar lines.  While the guitars reach for the sky, the drums and cymbals remain at a steady pace, tempering the sonic flight into a hazy dreamstate filled with Coley’s echoed and submerged words…