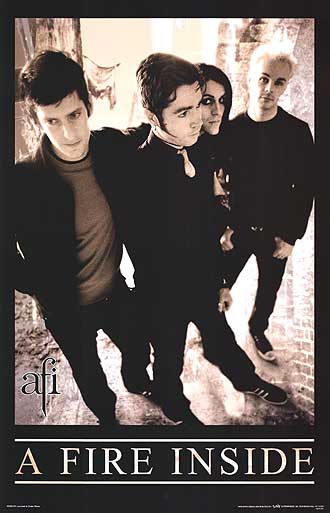 I was incredibly amazed at what I saw happening before my eyes at The Quest, MPLS, MN

To start this off, I'd just like to admit it was my first time seeing AFI. None the less, I was incredibly amazed at what I saw happening in front of me.

AFI has got to be one of the better live bands becoming so successful these days. Many bands clutter their live sets with flashy lighting and decor but not AFI. No, they depend on only their raw stage presence and talent to awe their audiences.

AFI's fans worship the ground they walk on, and they know every word to every song. It was a sold-out show and these fans packed the club from the front to the back. Here in Minneapolis AFI has been getting quite a bit of air-play with their latest single "Girls Not Grey" on the local Hard Rock/Metal station. Because of that there were quite a few Metal heads in the pitt; something that old fans didn't appreciate too much. I often wonder to myself why fans bother to whine about the new fans these bands get every year. When you're in a band, most of the time you want to be successful and that would, in most cases, require having a large fan-base. Yes, but just the same the crowd was into the show. Much more than any crowd I've ever witnessed. Kelly, a long time AFI fan and good friend of mine was brought to tears at seeing her favorite band playing on the stage in front of her. Man, I know she wasn't the only one there crying either, it was a moving performance. The band really connects with the crowd and the crowd seemed to connect with each other. When the band left the stage, the crowd began to chant "Through our blood, we are one" repeatedly until sign of a return. They played two more songs and alas, the show was over.

I didn't really know what to expect for my first time seeing AFI. I can't say it enough though, they are a truely AMAZING live band and I was extreemly pleased, oh and they played one of my favorites, "God Called In Sick Today". I know I got my money's worth on that ticket! All in all, it was probably the best show I've ever seen from a signed band. All I can think of is that these guys have some of the best true-fans in the world. I left the show that night saying to my friends "I really wanna have fans like that someday"